NEW DELHI: The Aam Aadmi Party has its eyes set on the state of Punjab, that’s likely to go to the polls in February next year.

AAP is currently leading a march to gherao Punjab Chief Minister Parkash Singh Badal’s residence, in protest of an alleged food scam worth Rs 12,000 crores, corruption and farmer suicide concerns. Badal, in turn, has accused AAP of “betrayal of Punjab.”


The video, online for 18 hours at the time of writing, has received over 100,000 views. The song features an interesting play on the word ‘aap’ -- where Kejriwal sings ‘bas aap ka raj chale’ whilst gesturing to the audience, with the word serving as a double entendre.

It may be unusual, but Kejriwal’s crooning should not come as a surprise, given that the Delhi Chief Minister had given a big digital thumbs up to AAP leader Kumar Vishwas’ recently released song titled “Ek Nasha: Nashe ke Khilaf”. 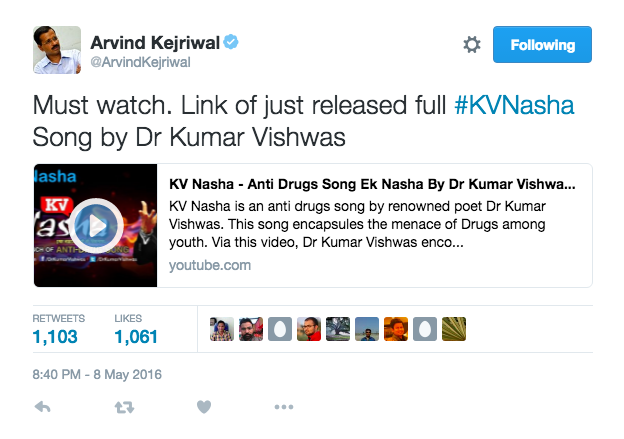 The song is located in the context of Punjab’s drug problem, with several veiled references to the government in power.

Was Kejriwal inspired? Perhaps. At the time of writing, the bigger concern is AAP’s massive protest outside CM Badal’s residence, with section 144 being imposed in Chandigarh as a precautionary measure. AAP claimed that more than 50, 000 supporters would besiege the Chief Minister's residence protesting against the Rs. 12,000cr food grain scam. Describing the AAP as "a band of fugitives" and "anti-Punjab" elements, Badal had called upon the people of Punjab to beware of their "nefarious designs" and narrow political interests.

Badal said the AAP had no definite agenda for the overall development and welfare of the state or its people. Rather, their sole agenda was to rule Punjab by hook or crook just to satiate their lust for power. Accusing AAP of fiddling with the sentiments of the innocent people of Punjab, Badal said this was not only deplorable, but also highly unethical. He said political outfits indulging in such gimmickry should refrain from it Badal's adviser on national affairs Harcharan Bains said that the Chief Minister would remain available at his residence to receive any political leader or representatives for discussion on any issue concerning the people of the state.