UJJAIN: “When I came to the Kumbh in my childhood, this was a beautiful river flowing with sweet water,” Badal Nath, 64, reminisces on the banks of the Shipra river in Ujjain in central India. “Last time (12 years ago), it was a stinking drain, nauseating even to step into, let alone take a dip. The water we see now has been pumped from the Narmada. What have we done to our holy river?”

Most people did not share the lament of the elderly sadhu from Uttarkashi. They did not know. Others did not care. The Shipra flowed smoothly through the month long Simhastha Kumbh Mela held at Ujjain in Madhya Pradesh till the end of May, holding out the hope of salvation to 60 million pilgrims who gathered on its banks to bathe in its waters. But the clear signs of a dying river and interventions that worsen its condition can no longer be wished away.

The situation is starker in the headwaters of the Godavari, where a Kumbh Mela is held as well every 12 years. Ramkund in Nashik, the centre of the great pitcher festival last year, dried up in April for the first time in living memory, placing in danger the ancient Hindu ritual of purification in flowing water.

Sinking aquifers and short-sighted public works such as paving banks and even the riverbed in many places has hastened the decline of Godavari, India’s second longest river that starts at a spring on Brahmagiri hill, some 30 km from Nashik in the western state of Maharashtra.

A practice that goes back to the eighth century, the Kumbh Mela gathering for a holy dip in a river is held at four places — Allahabad, Haridwar, Ujjain and Nashik — every 12 years. The largest congregation of people in the planet, the fair attracts the faithful in millions.

A kumbh is a pitcher. The full name of the festival held every 12 years is Poorna Kumbh Mela (full pitcher fair). The fullness of the pot symbolises the abundance of river water. The famous ritual baths during the Kumbh Melas reinforce the fact that it is essentially a water festival, to thank the gods for bountiful water. In a country where over 80% of the annual rainfall depends on the moods of the four-month southwest monsoon, water worship is as ancient as the birth of civilizations along rivers.

Clergy or laity, few of the millions jumping in for their ritual baths seem overtly conscious of the lack of flow in the rivers. But the organizers know the risk of massive public anger if the water is missing altogether. Hence the short-term solutions, which are becoming tougher and tougher to sustain.

Based on Hindu astrological calculations, the festival is not evenly spaced out. The Nashik Kumbh Mela was held in 2015, followed by the one at Ujjain this year. The next Kumbh at Haridwar on the Ganga is scheduled in 2021. Allahabad, considered the most important because of the confluence of the Ganga, the Yamuna and the mythical Saraswati, will host it in 2024.

The dismal sign of receding water was evident in Allahabad in 2013, where the banks of both the Ganga and Yamuna were wider than ever before, the water trickling sluggishly in a few shallow channels. Although the Indian government refuses to share data on flow of rivers that traverse international borders, the water in the two rivers was much reduced, according to several eyewitness accounts. Maintaining continuous flow of India’s holiest river has become a challenge, according to a report by the Indian Institutes of Technology. The situation seemed less dire in the 2010 fair in Haridwar but the massive Tehri dam upstream impacted water flow.

In Ujjain, the upper reaches of the Shipra carried just sewage a few years ago, when the Madhya Pradesh government of the Bharatiya Janata Party implemented an ambitious scheme to transport five cusecs of water every day from the Narmada near Omkareshwar to Ujjaini Gaon 50 km away, where Shipra originates. Ujjain city is another 50 km downstream. The water was pumped through a concrete, closed pipe, lifting it 350 metres from Narmada to Shipra so that pilgrims to the Kumbh Mela were able to take their holy dip. 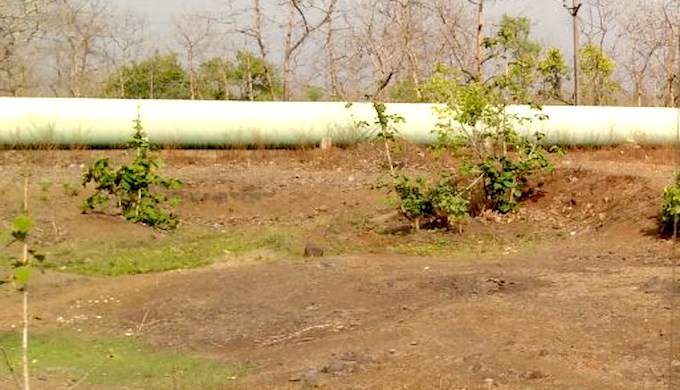 The concrete pipe carrying water to the Shipra from the Narmada. (Photo by Soumya Sarkar)

In Nashik, even the riverbed and the banks of the Godavari and the small streams that feed into it were paved over with concrete in many places to prepare for last year’s Kumbh Mela, choking the aquifers that keep the headwaters alive. This, coupled with the long drought in central India, resulted in a situation where the municipal authorities were reduced to pumping groundwater into the river to keep up a semblance of flow in 2015.

In Allahabad, to keep the astounding 80 million who visited the festival in 2013 happy, special arrangements had to be made to release water from the Tehri dam in Uttarakhand. It would have been still inadequate without nature’s help. The winter rains on the Gangetic plains were particularly heavy that year and the river benefitted.

This unheard of water scarcity at the Kumbh Mela at all locations is largely man-made, experts say, made worse by recent changes in weather patterns blamed partially on climate change. India, the world’s second-most populous nation, is one of the most water-stressed. Two straight years of scanty rainfall have led to drought in many parts of the country, affecting over 330 million people. Reservoirs are severely depleted, groundwater levels have sunk and many of the country’s rivers are down to a trickle; even the perennials are running dry in parts.

India is currently facing its worst-ever hydrological crisis, according to river expert Himanshu Thakkar. “Although the change in weather patterns and increasing rise in temperatures have contributed to it, our rivers are facing unprecedented deterioration today because of the way we have ill-treated them,” says Thakkar, co-ordinator of the South Asia Network on Dams, Rivers and People, a non-profit.

A river basin cannot be seen in isolation, says ecologist Somnath Bandyopadhyay, and imbalances caused by human intervention driven solely with the intention of extracting water for irrigation and drinking are bound to lead to consequences that take decades to unravel. “Some of the projects implemented in the 1950s and 60s failed to take the long view, and have contributed to the present sorry situation of sick and dying rivers,” says Bandyopadhyay, associate professor at the School of Ecology and Environment Studies, Nalanda University.

Thakkar is scathing in his remarks on river management. “The ecological ignorance at every level of governance is astonishing,” he says. “How else can we explain pouring concrete over the Godavari riverbed in Nashik and paving its banks, choking off the very aquifers that replenish the river?”

Instead of taking remedial measures, the authorities seem to be more interested in keeping up appearances, Thakkar says. The entire pipeline project from the Narmada to the Shipra is a result of skewed priorities that just wanted to keep the large number of expected pilgrims happy, he accuses.

Since the river waters in the Kumbh Mela are holy to the Hindus, it is they who should demand that the rivers are properly cared for, says Badal Nath, the ascetic from Uttarkashi. “Hindu samaj (society) has to take action,” he says. “We need to take action to safeguard our religion and traditions.” 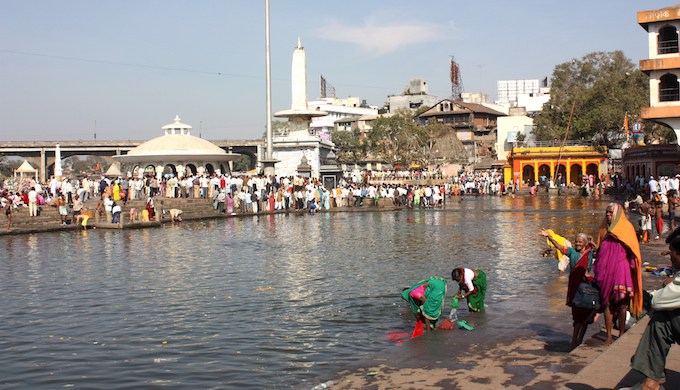 Ramkund on the Godavari in Nashik. (Photo by Arian Zwegers)

Bandyopadhyay is sceptical. “The concept of the Kumbh Mela is purifying yourself through water, not rejuvenating or purifying the water. Every pilgrim is concerned about his or her personal salvation. It is doubtful if there will be any concerted action from the Hindus as a community to restore the rivers,” he says. “We seem have learnt very little from the mistakes of the past. Unless there is a change in mind-set and approach, there is little hope that things will change for the better.”

It is not an easy task to get religious institutions and government agencies to pursue a common agenda that results in positive action on rivers, Thakkar says. “We need to work towards raising awareness on the issues. Only then can we start deliberating on solutions.”

For now, it seems that the serious harm to India’s rivers will not be reversed anytime soon. The Ganga will yet flow, perhaps not so freely, in the next Kumbh Mela in Haridwar and then in Allahabad, but time is running out for the Godavari and the Shipra.

(Cover photograph: The ghats of Shipra during the Kumbh Mela in Ujjain. (Photo by Soumya Sarkar)).

(This report was first published in indiaclimatedialogue.net).