Rural Distress: Why Jayalalithaa (Finally) Had to Join the Opposition Against Demonetisation

CHENNAI: Kamala, an elderly woman with a hunch, walked into a farmers’ cooperative bank near Kanchipuram at 5.30 in the evening with a single Rs 2,000 note. “Ayya, could you please take this and give me change. No shopkeeper is willing to take it when I ask them for only a soap and toothpaste.” Her eyes well up as the lone clerk in the bank explains he is unable to help.

Around villages in Tamil Nadu’s Kanchipuram and Thiruvallur districts in a 60km radius from the state capital Chennai, demonetization is having a widespread impact.

For a group of men at the village square of Koovam in Thiruvallur district, about 55km from Chennai, the November 8 announcement by Prime Minister Narendra Modi of making Rs 1,000 and Rs 500 notes invalid with immediate effect did not cause too much concern. “Almost all the men and women in our village are labourers. We didn’t have a single note with us,” said Nataraj, one of the men. He explained that the wages they earned depended on the type of work. “We get Rs 150 for removing weeds and Rs 350 for planting seedlings and harvesting. It just meets our necessary expenses,” he said.

Those who have not been affected are people like Fathima, who barely eke out a living. Widowed seven years ago, she sells cheap trinkets near Sunguvarchatram bus terminus, and makes Rs 100 to Rs 150 per day.

Balaraman of Kuthambakkam village rears 10 goats and sells the kids. Since he had money only in hundreds and he didn’t sell any goat in the past 15 days, he has not faced any problem. Logammal of Parvatharajapuram, who rears ducks along with her husband, said, “I sell an egg for Rs 3. With the 150 or 200 I make every day, I buy provisions and vegetables.” 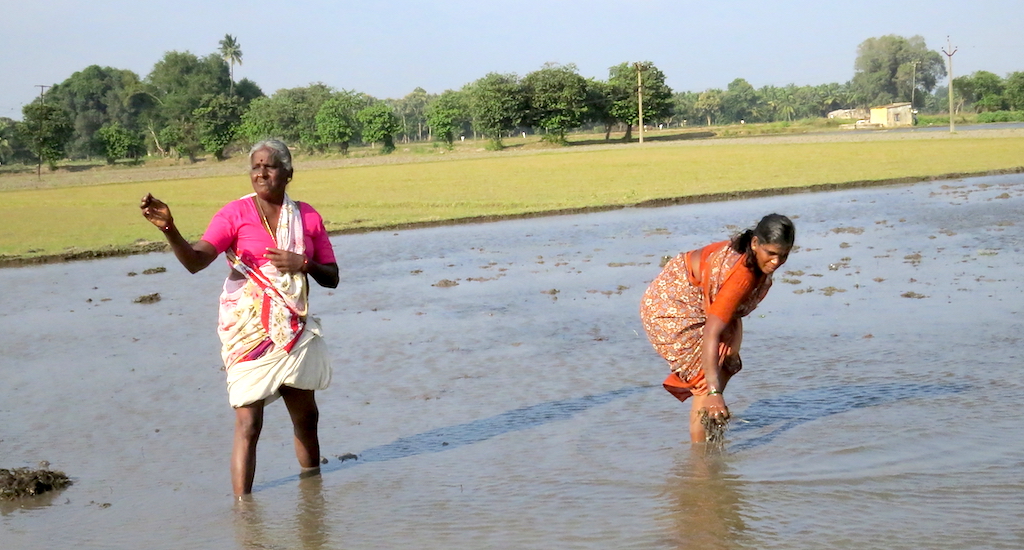 Farm hands Sornam Jeyaraman and Amudha of Narasingapuram village have agreed to take their pay later. (Photo by Jency Samuel)

Villagers who run petty shops and tea stalls on the main roads and highways have been affected the most. The Dharmaraj couple of Valarpuram runs a teashop. “We usually earn about Rs 2000 a day. But now we are forced to turn away people who bring old 500 notes. We are also unable to buy milk and other essentials. For the past 10 days, we have been making only about Rs 1000,” they said.

Similar are the stories of Damayanthi of Ulundhai and Roopavathi of Mannur, who run small shops. “I used to sell fruits also since people travelling by cars would buy. Only for two days, fruit sellers in Koyambedu wholesale market accepted the old notes. So I don’t sell fruits now,” said Damayanthi, adding that her earning has come down from Rs 2000 a day to Rs 800.

Damayanthi had saved four 500 notes. As there is no local bank she holds an account in one that is 4km away. With her laborer husband away, she has not been able to leave the shop and go to the bank.

The woes of Valarpuram villagers are related to their bank. Most of the villagers have an account in the cooperative bank, which remains closed after the announcement. So the villagers who had a few notes have not been able to exchange them. Luther is a stonecutter. Although he usually finds work in one of the many granite companies in the district, he has not had any work for 10 days. He attributes the reason to his work not being an immediate necessity. With no income, he has pledged jewels for everyday expenses.

The clerk in the only cooperative bank that was open said they have been asking the government that they be allowed to carry out transactions similar to nationalized banks. “We are here to serve the rural people. It hurts that we turn them away when they need us the most,” he told VillageSquare.in.

Interestingly, a group of laborers loading paddy sacks in Uthukottai village said they have used the old notes in the liquor shop run by Tamil Nadu State Marketing Corporation. 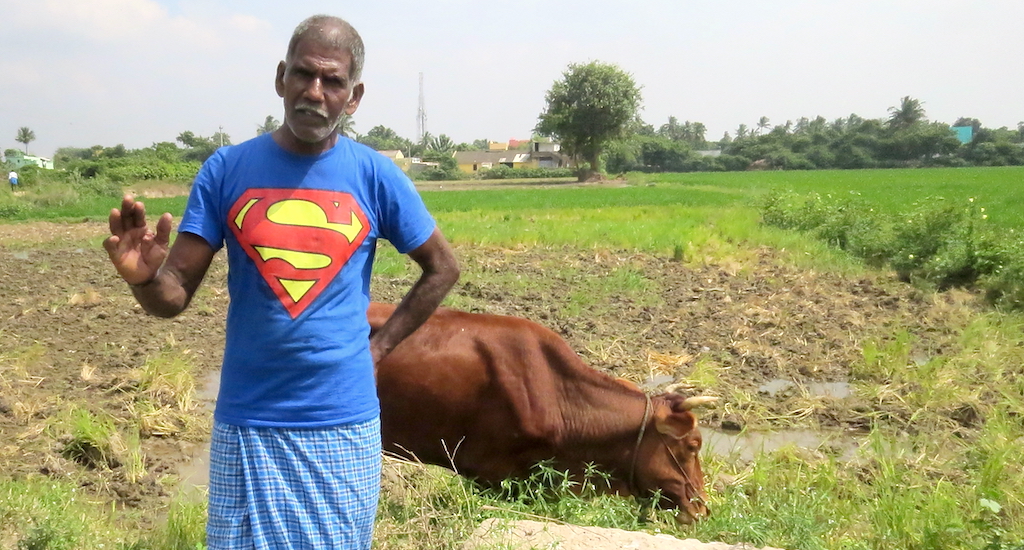 Selvaraj of Kuthambakkam village has not been affected by the ban. (Photo by Jency Samuel)

With a SIPCOT (State Industries Promotion Corporation of Tamil Nadu) complex and many industries in the vicinity, Sunguvarchatram attracts many workers from the northern states. While Ashok Yadav from Bihar, working in a chaat shop, has managed to deposit the small amount he had, Mohammed Tharif, a container lorry driver from Uttar Pradesh still has two Rs 500 notes.

Although the immigrants do not have any residence proof in Tamil Nadu and have bank accounts only in their native places, some of them have managed to exchange old notes using their Aadhaar card. Others like Mohammed Tharif, who do not have a bank account, are hopeful of exchanging the old notes before the deadline.

Though affected, the villagers showed resilience in trying not to let the situation affect them. Damayanthi is undeterred that she is unable to sell fruits. She is sourcing whatever she is able to – mangoes, tender coconuts, moringa – locally and on credit to ensure her shop is still stocked.

Trusting their owner, farm hands Sornam Jeyaraman and Amudha of Narasingapuram village have agreed to take their pay later as the owner said he did not have cash.

Selvaraj of Kuthambakkam has one acre of land. He borrowed Rs 150,000 to get his daughter married. While his wife took care of the farm, he worked as a laborer in a small company. He was laid off last week. “I got Rs 6300. I paid the Rs 2000 notes to the moneylender. I am keeping Rs 300 for household expenses. But I have no money for farm inputs. But I can’t mope. I have found a job as a gardener. I start work in December,” he added with a hopeful smile.

It is hoped that the government’s latest announcement of relaxing curbs for farmers and allocating Rs 350 billion for rural areas would ease the problems of villagers.

(Jency Samuel is a civil engineer and journalist based in Chennai. This article was first published in VillageSquare.in, a communications initiative focused on rural India)


(Cover Photograph: Turnover for the Dharmaraj couple of Valarpuram village, who run a small tea stall, has halved after the demonetization announcement. (Photo by Jency Samuel)