Currency Tsunami Hits Fisherfolk: "Black Money? I Have No Money At All"

THIRUVANANTHAPURAM: In the picturesque island of Anju Thengue, a poor village in Thiruvananthapuram district of Kerala, the banning of currency notes has brought widespread distress among the women who buy and sell fresh fish as all business in the market is conducted in cash.

Jessy, 63, is one of the oldest fisherwomen in the fish market on Anju Thengue, which means Five Coconut Trees in Malayalam. She does not have any view on the demonetization announced by Prime Minister Narendra Modi on November 8 or on black money or the political controversies around it. The only thing she knows for sure is that her sales have plummeted to a fifth.

“In the run up to Christmas, our village had been seeing joy and prosperity. But now the village is awaiting a hungry Christmas,” Jessy says. “I don’t have black money. But why buyers who regularly buy fish only from me are not coming to the market?”

The answer seems to be fairly clear and is connected with the demography of Anju Thengue and the hurried manner in which the demonetization drive has been implemented in one of the poorest village in Kerala. The small but thickly populated village has a population of 16,732, out of which 8,475 are females. As many as 60 per cent of the women are working in the fish trade, selling, auctioning, drying and associated activities, according to Anju Thengue Grama Panjayath. Most of them don’t have a bank account in any of the commercial banks.

The Mamballi Nedughadam Fishermen Society (MNFS) is situated at the centre of the village. In the morning, fisherwomen are gathering around the society that is the hub of their community. The scenes at the society office are turning ugly. One desperate but agitated fisherwoman vented her ire against the society authorities. “I have deposited my entire savings with the society,” she said. “But I am not permitted to withdraw the amount. Please help me if you can.”

Anticipating further distress, Stella, another fish trader, wanted to deposit whatever amount she had in hand. But the society was not ready to receive the amount. Jerald, secretary of the Fishermen’s Association in the village, and one of the coordinators of MNFS, expressed his helplessness. “If you deposit the amount, you could not withdraw it whenever you want,” he says. “We are helpless.”

The new rules in the wake of demonetization, which have been changing often as the government tries to grapple with the unprecedented situation, have brought cash transactions to a virtual standstill all over the country, particularly in fresh produce. Vegetable and fruit growers and sellers are also facing a crisis. See: Small vegetable farmers in Maharashtra suffer blow from demonetization

In Anju Thengue, the functioning of the society has been severely disrupted. MNFS was not allowed to exchange old Rs 500, and Rs 1,000 notes. Further, new notes are not being supplied to corporative societies such as this. 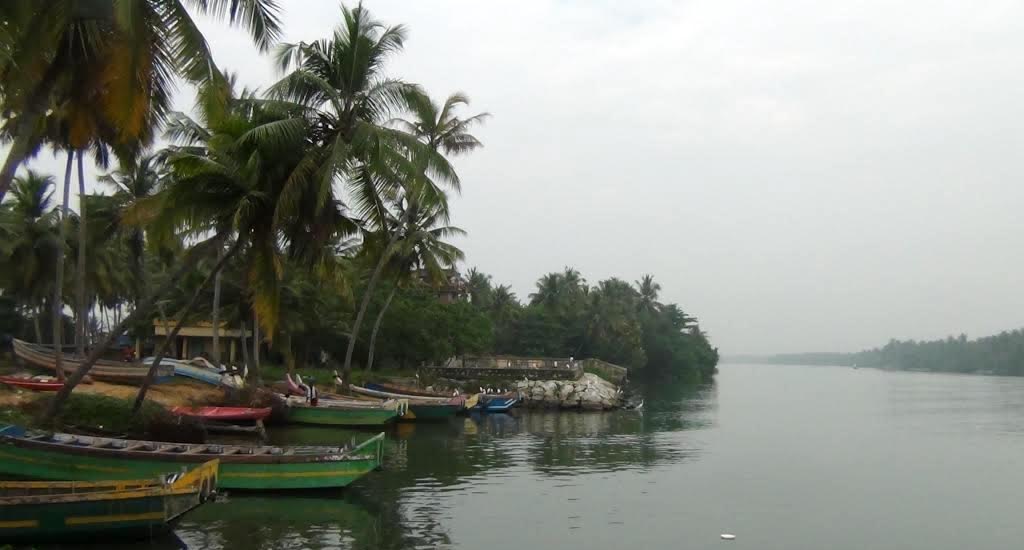 The outlook for fishing is poor as it is difficult to sell the catch. (Photo by K. Rajendran)

The role of co-operative banks has been restricted in the current demonetization scenario. “We have collected Rs 50 lakh from SHGs and same has been deposited in Anju Thengue Service Corporative Bank,” Jerald says. “But according to the new regulations, even a primitive corporative society couldn’t withdraw more than Rs 24,000 per week from a bank. We are unable to provide more than Rs 1 lakh to 3,000 women before Christmas. We are helpless.”

Karmali is another sufferer of demonetization. She is the official controller of the fish auctioning that takes place every morning on the Anju Thengue seashore. Till November 8, many people used to gather around Karmali, the powerful lady of the village. Now the seashore is vacant. Fishing has also come to a practical standstill because small merchants and street traders are reluctant to do bulk purchase due to the cash crunch.

“Irrespective of the variety and quality, one box of fish had to be auctioned from the sea shore at least for Rs 1,000,” says Karmali. “In fact, now the box has not been auctioned even for Rs 100.”

Like Karmali, most fisherwomen in the village are not proficient in any other job. None of them are even registered with the Mahathma Gandhi National Rural Employment Guarantee Act. Now the currency ban has brought on a sudden shift in the job pattern of fisherwomen. Huge chunks of unsold fish catches are been dried and sold in packets and fisherwomen are trying to sell them on the Varkala-Kovalam beach road.

But selling the packets is also not easy. “Instead of Rs 100 for a dry fish packet, most of the buyers are giving Rs 2,000 notes and seeking change,” said another resident.

Although banking density is very high in Kerala and it is ranked first in the country, services in the entire Anchu Thengue, with a population of 16,732, is being met by Anchuthengue Service Corporative Bank. “Till recently, we had a branch of a nationalised Bank in the village. But recently it was shifted to next town Kadakkavoor,” said Jerald.

In this poor fisher village, no bank could sustain if they have only commercial interest. New generation banking tendencies has made them reluctant to start branches in the village. Many fisherwomen have accounts in post offices. But they were tired of long queues in the name of exchange drives. Local moneylenders and private financial institutions have exploited this situation.

Sherly Joseph, a resident of the village, is a victim of a local shylock. She had to urgently arrange Rs 50,000 for a surgery of her husband. She knocked at many doors. But none were helpful due to the demonetization move. Finally, a local moneylender approached her with Rs 50,000, plus an exorbitant interest.

Sherly was reluctant to share further details. “According to the secret agreement reached between me and the moneylender, I cannot reveal it,” she said. “But it is unaffordable.”

All the people in the village are now asking when will this disruption end. Till that time, there are no easy answers for the women of Anju Thengue. Their luck will turn only when the fish trade revives and that is unlikely to happen till the markets is adequately monetized and restocked with currency notes.

(VillageSquare: K. Rajendran is a journalist based in Kerala.)

(Cover Photograph K.Rajendran:Unsold fresh fish being dried to be sold in packets.)