Kathua, A Symptom of An Endangered State

NEW DELHI: The Bharatiya Janata Party is dominant in Jammu, the Hurriyat in Srinagar and Chief Minister Mehbooba Mufti is floating somewhere over no man’s land. With her job reduced to signing off on decisions taken by the centre, Mufti at the start of 2017 seems to be in rougher weather in that her authorty has eroded almost completely in the state, and within the party.

This lack of an effective role was perhaps most graphically exposed in the wake of the Kathua violence where a Muslim household was attacked by a mob for allegedly killing a cow. While a gloss seems to have been given to the incident in the police narrative, reports of fear and terror from the district with a relatively small population of Muslims (7%) has led to tensions and protests in the Valley with the Hurriyat in the lead.

Kathua has been communally charged since 2014 when the new governments at both the state and centre were in power, with rumours of cow slaughter being used to further polarise the communities. Clashes at the time were intense, and controlled only after the Army was called out. 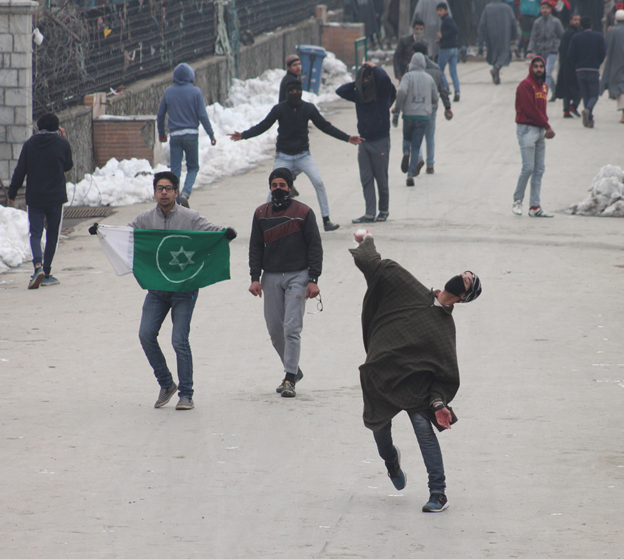 Significantly,the continuuing tensions have not elicited a word from the CM or a visit. Instead Minister for Forest, Environment and Ecology, Choudhary Lal Singh visited Harya Chak area in Kathua district last week and declared the situation to be under control. He blamed certain “nefarious elements” for creating the tension, and while publicly he did not identify these, the very fact that he represents the BJP in what is now a highly polarised state sent out its own message.

The RSS is very active in Kashmir, and has moved cadres and shakhas into the Valley as well. Statements from senior Ministers in government have fuelled the fires in the sensitive border state, with the issues of Kashmiri pandits and Article 370 being pursued aggressively in a campaign where the Valley is shown as ‘anti national’ with nationalism being rested in Jammu.

The only counter has come from the Hurriyat leaders in Kashmir, who organised protests, and hit out at the state government for inaction and deliberate partisanship. Protests and shutdowns have become the order of the day with statements becoming harder, and protests violent.

Unfortunately, a silent PDP and Chief Minister is allowing what seems to be a larger game plan, as alleged by the National Conference and the state Congress, to divide Jammu and Kashmir into religion dominant sections wherein the BJP and its affiliates speak for Jammu, and the Hurriyat and other separatist leaders for Kashmir. All deny it publicly, but all admit to it privately.

PDP sources expressed worry about this, admitting that the party had been unable to bridge the gap in any mentionable manner. Instead the silence of the CM seems to be playing into the hands of those wanting to divide Jammu and Kashmir, as per an earlier plan formulated by a US driven Kashmir Study Group with graphs and maps visualising a division of the state along communal lines.

The polarisation between the regions of the state, and more specifically Jammu and Kashmir is becoming deeper with the propaganda in each blurring the lines between fact and fiction. An apathetic state administration, torn also along similar lines, is finding it impossible to cope with officials from Jammu differing with the administrative machinery in Kashmir.

CM Mufti seems to have thrown in the towel, with her writ now being questioned even in the Valley from where the PDP had earlier received overwhelming support. Instead South Kashmir that was for long considered a PDP, and individually a Mehbooba Mufti bastion, has gone up in flames of protest with hardliners gaining control.

Most dismayed at this turn of events are sections of the youth who are finding themselves in the midst of hardliners, as they told this writer last month, from both sides. Keen for normalcy, they are coming under increasing pressure to conform that in the Valley today means a certain dress and moral code, as well as increasing inability to question whatever becomes the ‘popular’ narrative at the time. Music, movies, are all becoming a ‘no no’ as the polarisation drives both Jammu and Kashmir into hardliner options. More so the Valley where the intervention of the world outside is restricted, by law and by practice.

The discourse, in the absence of an effective state government, is becoming increasingly hard and divisive. Kathua and Kishtwar are a case in point, but so is the ability of the hardliners of both sides to turn every issue into a case for increasing polarisation. As the elected representatives of all parties in the Valley point out, “we have all become completely irrelevant and for the first time in years are unable to even visit our constituencies.”

Advice to Mufti to resign from some of her PDP leaders is coming against this backdrop, as “if she quits we might be able to regain some of the lost ground.” In the current situation in the Valley both the regional political parties---the National Conference and PDP---that had once attracted considerable optimism, are completely discredited with the leadership having passed almost entirely into the hands of “invisible” hardliners in both Jammu and Kashmir. Both sides are using the social media cynically to form a volatile, and militant, support base. So much so that the Hurriyat is definitively the ‘moderate’ voice in Kashmir today.

All sections of society in Kashmir today are worried about what lies deeper down in the abyss, with communal polarisation under Mufti’s watch increasingly rapidly. A senior PDP leader said that her resignation would provide the ‘break’ so desperately required but when questioned agreed, that this too was a ‘if’ as the situation “is moving fast out of political control.’