ITANAGAR: Asserting that Arunachal Pradesh is very much a part of India and not China, the All Arunachal Pradesh Students’ Union (AAPSU) on Monday staged rallies in the capital Itanagar and Tawang near the international border to protest against the Chinese government’s ‘renaming’ of six places in the state.

Last week, China’s civil affairs ministry had issued a notification changing the names of six places in the state (giving them a more Sinicized touch), saying it had a “lawful right” to do so since those areas were part of what it calls South Tibet. The move is being seen as retaliation to India ‘allowing’ Tibetan spiritual leader Dalai Lama to visit the state earlier this month.

Since then, the rhetoric from China has grown steadily, even warning that India will ‘pay’ for its actions. The latest move of renaming six places though, has angered many in Arunachal Pradesh. None more so then the students’ union, whose members even took to burning an effigy of Chinese Premier Xi Jinping.

Today’s protest however, is symbolic of a greater characteristic that is unique in the region where emotions are driven more by ethnic identities rather than the idea of being Indian.

Many people in Arunachal Pradesh proudly state that the citizens here are more patriotic than anywhere else in the country. A popular anecdote often repeated here is that people in the state greet each other with a ‘Jai Hind’ which is proof of their patriotism (although it’s unclear how much of its usage actually stems from a sense of patriotism rather than anything else).

Dr Nani Bath of the Rajiv Gandhi University here and a prominent political commentator feels there are several factors that have contributed to this sense of ‘Indianess’ among the people here.

“We are trained by the successive governments,” he said, calling it a deliberate policy.

“First, Nehru tried to win hearts of tribal leaders by taking them to visit places like Delhi and Kolkata, then Assamese was replaced with Hindi as the language of formal education in schools with teachers from UP and Bihar posted here and the creation of SSB for anti-China propaganda,” said Bath.

Journalist Azing Pertin expands on the idea of patriotism stating that “before the concept of nationhood emerged among us, we tribal people found ourselves already in the Indian Union. As such we have accepted and lived with it. The talk of South Tibet and China claiming Arunachal is a bogey and false since the majority of tribals of the state were independent from Tibetan kingdom and had their own tribal council systems which governed them”.

Others such as former general secretary of North East Students’ Organization, Gumjum Haider, who made the jump to electoral politics in 2014, said that other factors too have influenced people.

“A lack of exposure and a lack of self-retrospection make our people not realise their self-worth. Arunachalis are very naive and they can be manipulated easily,” he said. 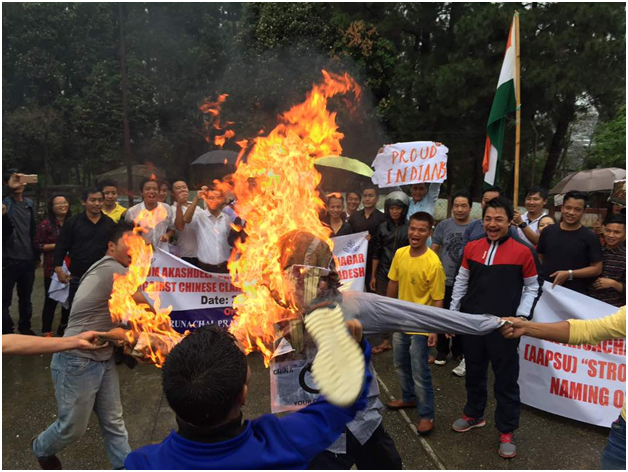 However, he is firm that whether it is “India, North Korea, China, America or Cuba, nobody has right to alter our names” and that “that should be very clear to all”.

“You never know about the Dragon. At least we are enjoying all democratic rights here in this country,” Dai said, adding that “we have never seen China or for that matter experienced it governance. So it will be like trudging into an unknown realm. In this context, for me, patriotism is by choice.

Dai’s statement is somewhat reflective of the state of affairs here unlike in Manipur, Nagaland, Assam and even Jammu & Kashmir where separatist groups are well and active.

“History of the Nagas, Meiteis, Kashmiris are different from us. An Arunachali identity is not possible as we belong to different ethnic communities,” Bath feels. And indeed he is correct.

The state is home to at least over 20 major tribes and an even larger number of sub-tribes. Since the tribes have their own unique customs and languages, the lingua franca here is Hindi (or at least a form of Hindi with influences from Assamese, Nepali, Bhojpuri, and Bengali).

Haider said that “Hindi and Bollywood have penetrated so much in our minds but we are not doing anything to safeguard or to promote local languages”.

Dai also agrees that safeguards need to be placed and that the “AAPSU should start a process whereby the defective statehood act can be rectified” in order to give the state and its people complete rights over the land and resources as is the case with Nagaland and Article 371 (A) of the Constitution.

As for today’s rally, there were some mixed feelings.

While Dai understandably called it a success “in spite of heavy rains”, the turnout itself was lower than expected, most likely due to sudden rains and examinations that are on.

Pertin said that “youths and students voicing their angst against the non-stop Chinese interference is an issue which needs to be dealt with seriously”. Students taking out the rallies reflect the common and popular opinion against Chinese disturbances”.

Although he could not be part of today’s rally at Itanagar, Haider said that “we should not aim (our stance) at China alone” and that the people of the state must “assert our indigenous right to both countries”. A sound statement considering the fact that while the Chinese may have given their own names to places in the state, the name ‘Arunachal Pradesh’ itself has no resonance with any of the indigenous tribes here.

Another view was offered by current NESO co-ordinator, Pritam Sonam, who said that “it's not necessary that time and again we should show our patriotism and tell the world that we are Indian”.

Taking to social media, Sonam said that “we are Indian by origin and by birth but let's ask the fellow mainland Indians if they know about Arunachal or even they consider us as fellow Indians”.