SRINAGAR: In one of the deadliest attacks on government forces this year, five J&K police personnel and two bank guards were shot dead by militants in a weapon-snatching bid in south Kashmir on Monday.

Amid a record surge in insurgency-related incidents this year, the attack took place in the volatile Kulgam district of south Kashmir which has registered the highest number of local youths joining militant outfits since last year.

Officials said a van carrying security personnel and staff of J&K Bank was on way to district headquarters in Kulgam town after depositing cash worth lakhs in a branch when it came under attack in Pombai village. 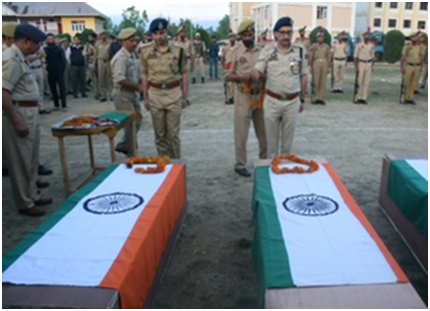 "Militants stopped the van in Pombai village and opened fire at it indiscriminately, resulting in on spot death of seven persons, including five policemen. By the time forces reached the area, the attackers had fled," Inspector General of Kashmir, SJM Gilani said.

Sources said the militants were dressed in Army fatigues and they tried to snatch weapons from the police personnel accompanying the vehicle who apparently resisted their attempts, triggering the confrontation.

The Hizbul Mujahideen outfit claimed responsibility of the attack. In a statement to a local news agency in Srinagar, the outfit's operational spokesman, Burhanuddin, however denied police claims that the bank employees were killed in the attack. 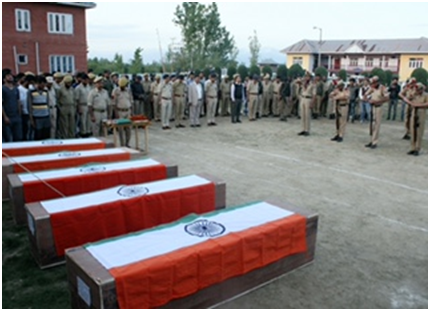 “We didn’t attack the vehicle with intent to loot the cash. We have enough cash. We condemn the killing of two bank employees and want to clarify that they were shot dead by CRPF personnel and not by militants,” Burhanuddin said.

The militants escaped with five rifles of slain policemen from the scene of shooting. Chief Minister Mehbooba Mufti and other political parties condemned the incident. "It shows the criminal tendencies that are growing in our society," she said.

The attack is part of the larger trend that picked up among militant groups after Burhan Wani's killing in south Kashmir last year. They encourage young boys inclined towards their path to snatch weapons from government forces before joining their ranks.

According to police sources, this "test" while "proving" the dedication of new recruits also makes them outlaws in the eyes of security forces at a time when the supply of arms and ammunition from across the border has dried up.

Since Burhan's killing, at least 60 weapons have been snatched from forces personnel in different incidents across Kashmir. Last week, a militant was arrested while another managed to escape in a foiled weapon snatching bid at a bank in south Kashmir.

The attack in Kulgam comes a day after a civilian was killed and another suffered injuries in two militancy related incidents in Kashmir. A grenade exploded near a police station in Srinagar's Khanyar locality on Sunday evening, killing one civilian while five policemen were injured.

In another incident, a civilian was injured during mysterious gunfire near a BJP leader's home in south Kashmir, which is the epicentre of the renewed violence in the disputed territory. The civilian is admitted at a hospital in Srinagar with critical injuries.