SRINAGAR: Fresh clashes between students and government forces broke out in the heart of capital Srinagar on Tuesday, a day after tensions spread to north Kashmir where student protests were reported yesterday after which authorities ordered closure of three educational institutions.

Witnesses said dozens of students pelted stones at government vehicles moving on the busy Maulana Azad Road in the heart of Srinagar, disrupting traffic and normal life. Forces moved in and chased away protesters. "The situation is normal as of now," a police officer said.

Authorities have suspended class work in at least five educational institutions even as fresh spell of protests and clashes broke out between students and government forces yesterday in parts of Kashmir Valley on the day the darbar opened in Srinagar city.

Officials have suspended class work in two institutions in central Kashmir’s Budgam district and three in north Kashmir's Kupwara district following protests and clashes between students and forces yesterday against the assault on students in Pulwama last month.

"As a precautionary measure, it was decided to suspend class work in these institutions so that the situation doesn't turn ugly. There have been protests by students of other schools and colleges but we are hopeful that the normalcy will be restored soon," a senior officer in the state government said.

Spontaneous protests by students erupted on the day the government offices and the civil secretariat opened in Srinagar on Monday after the bi-annual darbar move, a remnant of the erstwhile Dogra rulers who shifted their capital to Jammu region for six months to escape the harsh winter of Kashmir.

Protests were reported yesterday by students in Tral, Budgam, Aripanthan and even parts of north Kashmir including Langate and Kupwara which had remained calm during the prevailing crisis in the Valley. Six students were detained by police in Tral, anguishing the local population.

In capital Srinagar, dozens of students took out a demonstration against the last month's assault on students of Pulwama Degree College that left 50 pupils, many of them girls, wounded.

Witnesses said an Army convoy passing on the Srinagar-Muzaffarabad highway on Monday was stopped by students in Zakura locality of Srinagar who later pelted stones at the vehicles. They said the Army fired shots in the air to disperse the students.

In order to quell protests, police deployed in these areas mostly used teargas and batons, triggering clashes and stone throwing. There were no reports of any injuries among the students.

Tensions in the student community escalated since April 15, when police raided Pulwama Degree College, about 30 km from Srinagar, over unknown reasons, angering the students. In the subsequent clashes, at least 50 students were injured.

On April 17, the region erupted in another round of student protests in which young girl students also participated that left more than 100 students and an unknown number of police men, including two officers, injured.

To prevent the situation from blowing into a full fledged uprising, authorities responded by closing colleges, universities and some high schools for a week, but the protests continue unabated.

Meanwhile, students of Al Fallah Public School in Aripanthan staged a demonstration to demand the release of

Sahil Ahmad, a student of sixth standard, who has been detained by police last Thursday during a nocturnal raid in the area. He was allegedly arrested in place of his elder brother Adil. Reports said Sahil was later released while the protests went on in the area. 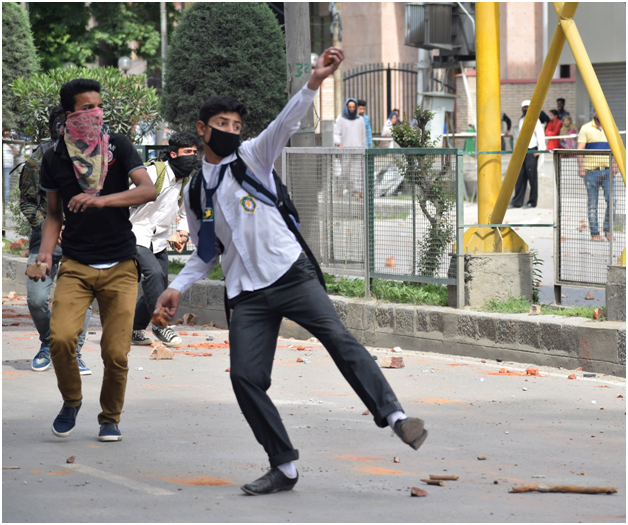 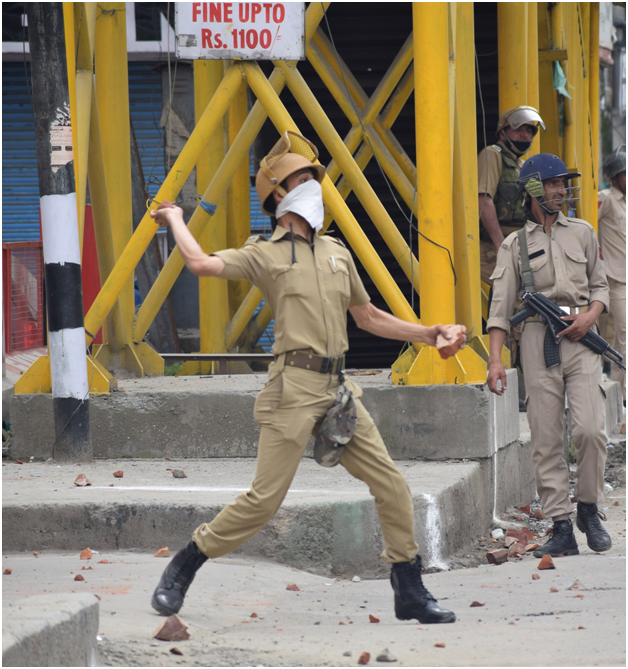 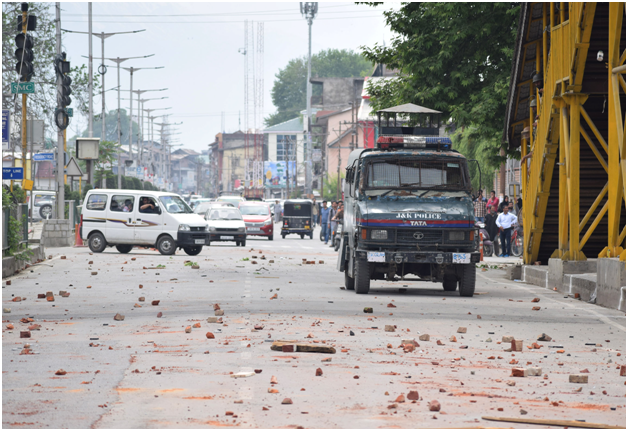 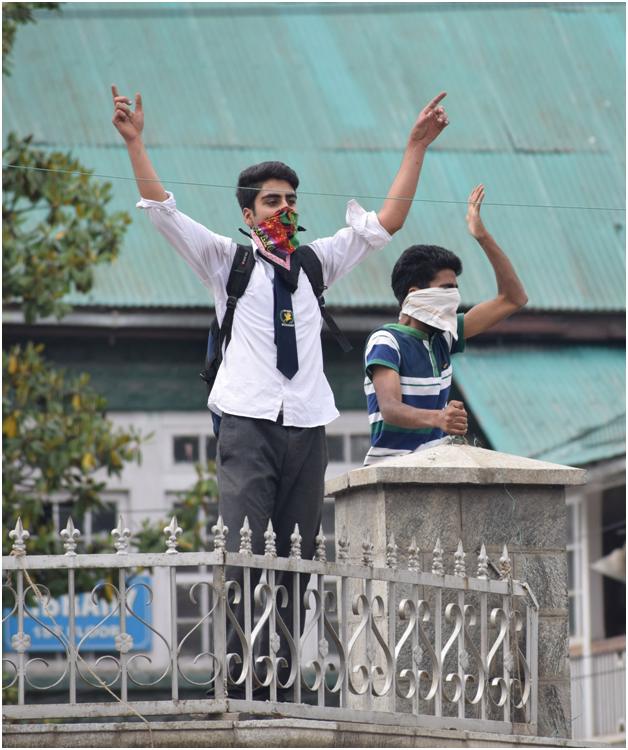 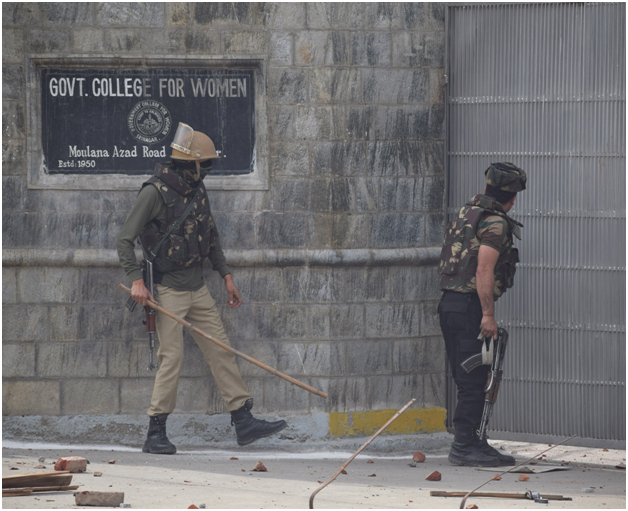 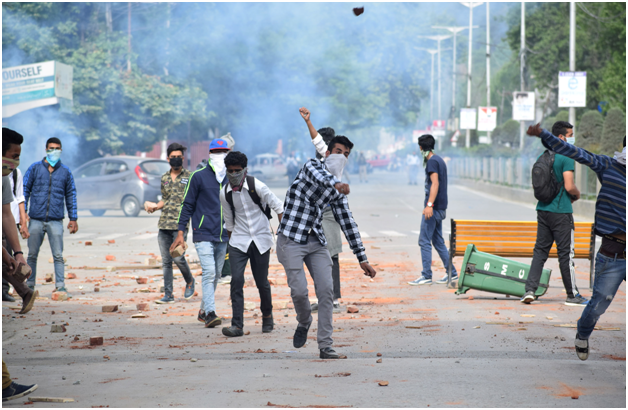 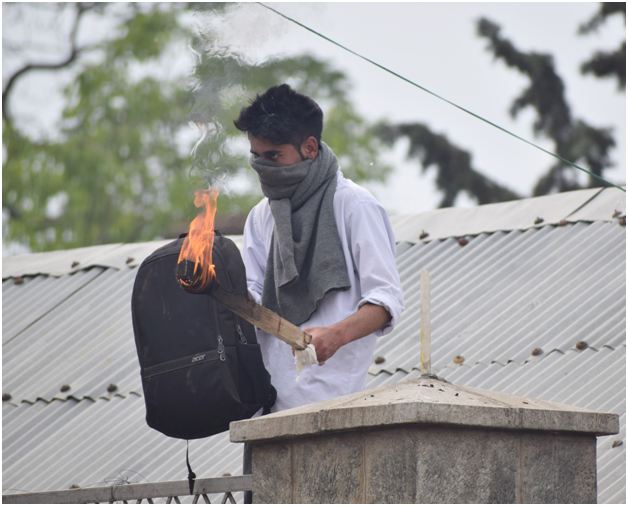