SRINAGAR: The Army's clean chit to its officer involved in taking a human shield on the day of bypoll to Srinagar constituency last month has drawn sharp criticism from people in the Valley who are seeing it as 'continuation of regime of impunity' in the state.

Mushtaq Ahmad Dar, 25, a resident of Budgam district, was strapped to the front of an Army jeep on April 9 in Utligam of Beerwah and paraded through at least dozen villages as Kashmir erupted in massive anti-election protests on the day with at least nine civilian protesters shot dead by government forces to curb the protests. 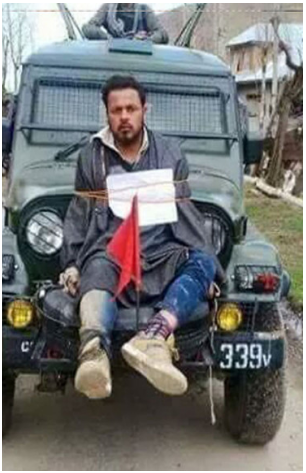 According to media reports, the Army major involved in the incident has been given clean chit by the Court of Inquiry (CoI) set up by the Army to investigate the matter following a massive public uproar. "No action has been recommended against the Major. Court martial is out of the question. Not even disciplinary action was recommended against the officer," the reports said.

The clean chit by the Army drew sharp reaction on social media from Kashmiris, "The decision to give clean chit to the Army major shows that the regime of impunity hasn't changed. Wait for the repeat of more such cases in future in 'national interest'," Wasim Rasool posted on Facebook.

Days after the video showing Dar tied to the army jeep as a human shield against protesters surfaced, the Jammu and Kashmir Police, following the intervention of Chief Minister Mehbooba Mufti, filed an FIR against the Indian Army for abduction and wrongful confinement of Dar, who was incidentally returning after casting his vote when he was abducted.

"The Army used a Kashmiri as a human shield and has now given a clean chit to the accused officer. This shows how unworthy Indians consider the life of an ordinary Kashmiri. Remember Farooq Dar had voted and was not a protester," Javed Mujtaba, an academic, posted on Facebook.

The incident evoked widespread condemnation from human rights groups across the globe and was reported by major media houses with the New York Times terming it as a "new low" for India and its armed forces in the last three decades of insurgency in Kashmir.

The J&K State Human Rights Commission had also taken cognisance of the issue and asked the state police to file a status report in the matter after a human rights activist approached the commission with a plea to pass orders for punishing the Army personnel involved in the case.

However, the BJP-led Centre had hinted at backing the accused army officer of Rashtriya Rifles who took the decision to tie the youth as a human shield to the jeep after a preliminary army probe concluded that the officer had to take the decision as a "last-minute resort" against protesters who had broken into polling stations at many places.