India@70: Photographs Say It All for the People of Flood-Hit Assam

GUWAHATI: People in Assam braved the devastating flood to celebrate Independence Day across the state. Some of the photographs posted by some of the teachers, whose schools have been submerged by flood water, speak a thousand words. 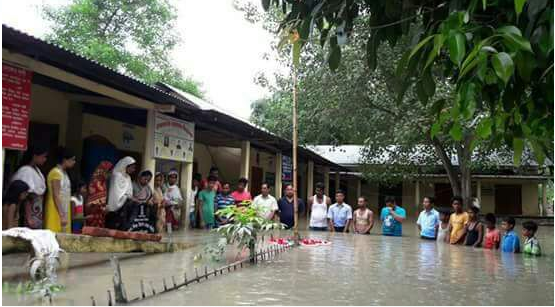 Twenty five districts of the state have been inundated by flood waters which has affected more than 33 lakh people. Hundreds of schools have been destroyed or partly damaged. So far 28 people have died in the second spell of the floods. This after 74 persons died in July when the floods hit Assam. These figures have been released by the Assam State Disaster Management Authority (ASDMA). The death toll might be higher.

But on Tuesday morning, the teachers and students came out to hoist the tri-colour braving waist deep levels of flood water.

One photograph of flag hoisting at Naskara Lower Primary School under Fakirganj Police Station in Dhubri district has been shared athousand times on Facebook after it was uploaded by one its teachers Mizanur Rahman. 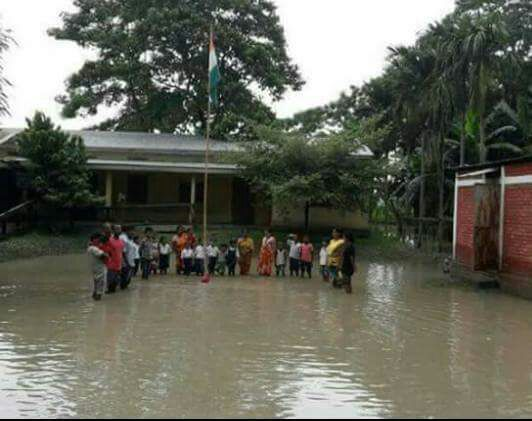 Wishing everyone a Happy Independence Day, Rahman, wrote on Facebook that the photograph will also help highlight the people’s distress.

The photo shows two teachers and two of its students with water levels touching their chest saluting the tri-colour on the courtyard of their school.

Rahman couldn’t be contacted despite several attempts by The Citizen as the area is completely cut off. 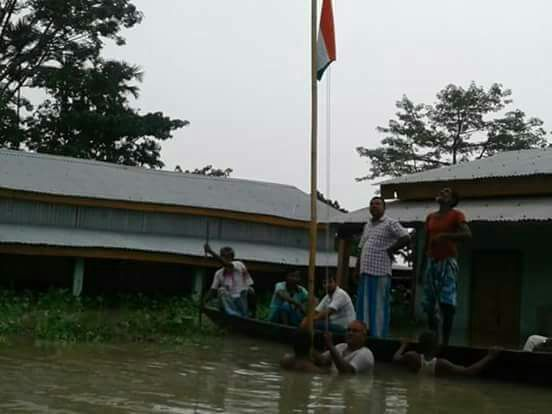 “The entire area is cut off from the mainland. There is no power supply for the last several days. So, it’s almost difficult to get in touch with the people there,” Subhash Chakrabarty, a teacher at 623 No Ghager Alga LP school, told The Citizen.

In another photograph tweeted by state education minister Himanta Biswa Sarma shows that one school teacher climbed up to the tin-roofed school to hoist the national flag on Independence Day in Morigaon district.

Earlier on Monday, Army had to be called for rescue and relief operations in several places. Army vehicles assisted the civil administration in ferrying rations and other stores to the relief camps, said a defense spokesperson. 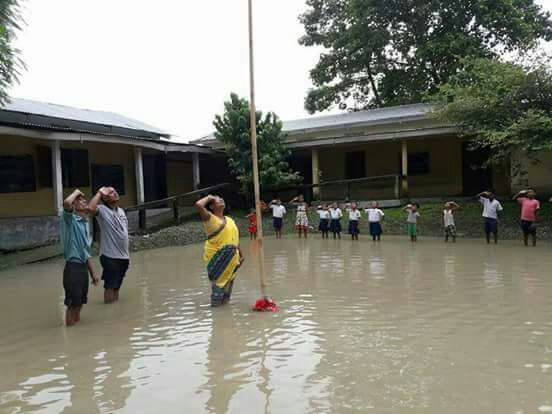