SRINAGAR: All the three suspected fidayeen militants, who stormed a security installation near Srinagar airport in wee hours today, killing a BSF soldier and injuring three more troopers, have been gunned down, officials said.

While two militants were killed in initial exchange of fire, the third was gunned down in late afternoon. Chief of Kashmir police, Muneer Khan said the gunfight has ended.

“All three militants were affiliated with Jaish-e-Muhammad and they have been killed. They (Jaish) believe in surprise attacks but airport wasn't apparently their target,” Khan said adding that six to seven more militants from the group are on the run. “We will have to deal with them separately. Such attacks will continue to happen as long as Pakistan is our neighbour.”

Earlier today, police and witnesses said loud explosions and gunfire rattled the Humhama locality bordering the Srinagar airport at around 4:30 am when a group of heavily armed gunmen stormed the 182 battalion BSF camp, catching the security personnel off guard.

"There were a fierce and intermittent sound of gunfire followed by loud explosions ahead of dawn. My wife woke up the kids and we huddled inside the lobby where it was safer," Ghulam Rasool, a resident of New Friends Colony near the Srinagar airport, said over phone. 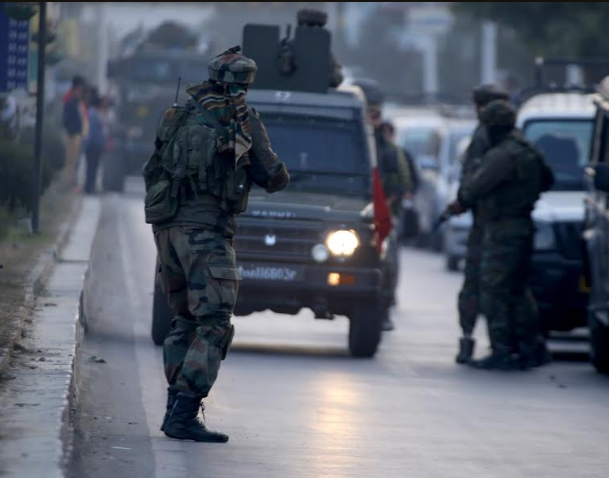 Police said the militants hurled grenades and fired indiscriminately as they entered the camp. "However, the guards effectively returned the fire, resulting in the killing of two militants while four BSF jawan were injured, of whom one, reported to be an assistant sub inspector, succumbed at a hospital,” sources said.

The lone gunman then took refuge in the camp's administrative block which was surrounded by forces. Soon after the attack, a large contingent of police, paramilitary forces and army arrived in the area. Police said drones were flown to keep watch on the movement of the gunman.

"It was a suicide attack. The operation has ended," SSP Srinagar, Imtiyaz Parray said.

The attack briefly disrupted operations at the Srinagar airport where all flights till 10:30 am were cancelled to prevent any untoward incident. Director General of Police S P Vaid said Indigo and AirAsia flights took off from the airport later in the day.

“We are in the process of identifying the militants. A cache of arms and ammunition has been recovered from them,” a police officer said. No outfit has claimed responsibility for the attack so far.

The attack comes a day after a policeman Ashiq Hussain, who was posted as munshi in Awantipora police station, was shot dead by suspected militants in south Kashmir. “Ashiq was attending the marriage of his relative at Padgampora when militants opened fire at him and killed him on spot,” officials said.

Five suspected militants were also killed in separate counter-insurgency operations in Kupwara and Baramulla districts yesterday while a grenade attack in north Kashmir resulted in injuries to three policemen.

After a brief lull, insurgency related violence has started to gain momentum in Kashmir once again with focus now shifting from South to North Kashmir which, according to police, is emerging as hot-bed of militancy and a safe haven for foreign militants.