Cotton University Students Rally on ‘Death to Democracy’ in Assam

GUWAHATI: A group of students from Cotton University in Guwahati, stifled by the present hard situation in Assam, decided to speak out loud and clear. And break the restrictions that are gradually being imposed on free speech.

About 60 students of of Swahid Mozammil Haque Boys' Hostel choreographed the demonstration with eight themes to reflect the present situation in the state and the country as whole, taking out a procession as part of the University week.

“It’s very disturbing to witness the things which are going around. Everywhere people are being killed for staging protests. It seems that democracy has been murdered in our country. We have seen enough. It’s time we as students also should do something so that people realize what’s unusual things are going on,” Mukunda Saikia, a student of Geology in Cotton University told The Citizen. 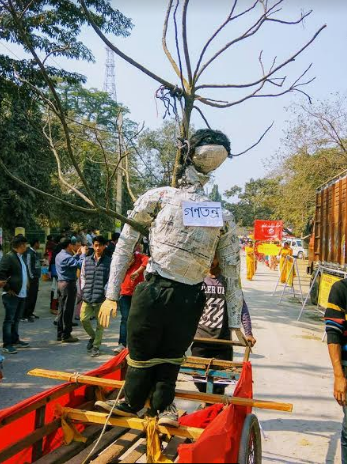 The themes presented by the students included the Centre’s Citizenship Amendment Bill, 2016 which grants citizenship to the religious minorities from neighbouring countries; as well as the government’s pandering to corporates and neglect of the victims of floods and erosion in Assam.

Saikia has also penned a song on the recent Dima Hasao incident when two protestors were killed by police firing in Assam last month. “We need to raise our voice against such injustice. When we took out the rally many people joined us and appreciated our work. It means that we have been able to send the message. I will also complete the song soon,” Saikia added. 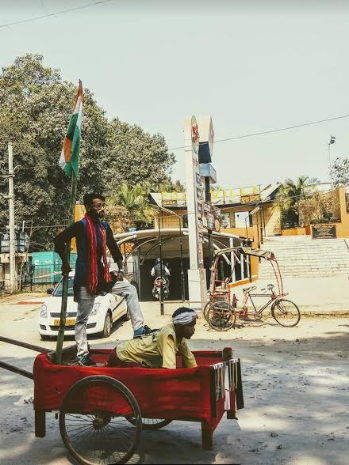 In the last week of January two youths were killed by police firing after they were protesting against the apprehension of Dima Hasao district being included in Nagalim as per the framework agreement. This was in response to a statement made by a local RSS leader suggesting the same as part of the implementation of the yet unknown Naga accord.

The students felt that police ‘atrocities’ in Assam under the leadership of Chief Minister Sarbananda Sonowal have reached new levels.

”When the British were suppressing protests once Quit India Movement was launched, in Assam between August 9 of 1942 to December 31 of 1943, there were four instances of police firing at protesters. After Sarbananda Sonowal led BJP government came to power in Assam on May 24 of 2016, there have been five instances of police firing at unarmed protesters,” said Bonojit Hussain, an independent researcher and activist.

The police firing took place at Raha, Kaziranga, Goalpara and Dhula besides this Maibang incident. At least seven people have died in the police firing in the last couple of years.

Though investigations have been set up the results have still not been made public.