ITANAGAR: A massive carnival concluded recently at Gujarat, seemingly to celebrate the ‘ancient’ link between mainland India and the mostly-neglected Northeast (a term that is more reflective of a region rather than a single cultural unit).

On March 25, on Ram Navami, the annual Madhavpur Mela kicked-off at Madhavpur (Ghed) in Gujarat’s Porbandar district and lasted till March 28. What caught most people’s attention, thanks partly due to the unending tweets by Arunachal West Lok Sabha MP and Union minister of State for Home Affairs Kiren Rijiju, was that this year’s fair would ‘re-enact’ the ‘heroic kidnapping’ of princess Rukmini by Lord Krishna. While plays depicting legends and myths are a regular fare at religious carnivals, what made this year different is the ‘revelation’ that princess Rukmini was a member of the Idu-Mishmi tribe of Arunachal Pradesh!

The ‘legend’ of Rukmini being a member of the said tribe has been propagated since around the 1980s, thanks mostly through schools in the state that later even managed to make its way into the official information brochures of the state government’s tourism department. 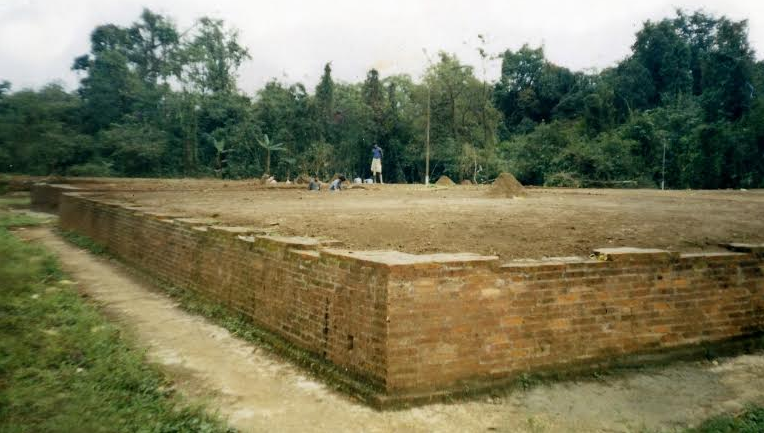 While most sources state that Rukmini was the daughter of King Bhishmaka of Vidarbha (in present-day Maharashtra), a myth has persisted in Arunachal Pradesh that she was, in fact, an Idu-Mishmi, probably sporting the traditional bowl haircut that was prevalent amongst community members earlier.

Where did this myth originate? No one within the community is quite sure or willing to go on record. The basis of the myth, however, is the ruins of the Bhismaknagar Fort, located near the Arunachal-Assam inter-state boundary around 25 kilometres from the Lower Dibang Valley district headquarter of Roing.

Falling under the jurisdiction of the Guwahati circle of the Archaeological Survey of India (ASI), the fort is believed to have been built by the Bhismaka dynasty of the Chutiya (pronounced Sutia) kingdom that had a stronghold in the Sadiya region of present-day Assam and the foothills of Arunachal Pradesh. The kingdom is said to have existed from around the 12th to the 16th century.

D Dutta, Deputy Director of the State Directorate of Research (Archaeology), said that the remains of the fort have not been carbon-dated and could date back to the 9th century. Archaeological evidence too, he said, suggests that there is no connection between the style of that found in the Arunachal Pradesh site to that of those in Vidarbha.

“Perhaps there was another king by the name of Bhismaka and perhaps his daughter’s name was also Rukmini,” Dutta said.

Ginko Linggi, president of the Idu-Mishmi Cultural and Literary Society, informed that he and his friends began hearing about the myth when they were in school in the eighties.

Linggi said that there are no records or mentions of such a myth as per the traditional oral history of the indigenous tribal community.

Like many others from and outside the community, Linggi said that proper scientific research is required before any conclusion can be made on the veracity of the myth. One of those was Vijay Swami.

Swami has been a long-time resident in Arunachal Pradesh, having previously worked with the Vivekananda Kendra Vidyalaya for 15 years and is now the executive director of the Roing-based Research Institute of World’s Ancient Traditions, Cultures & Heritage. More importantly, Swami acted as a liaison between the state government and organisers of the Madhavpur Mela and was in attendance at the carnival.

Having reached Guwahati from Gujarat, Swami informed that a team of 22 people, including 15 members of the cultural troupe, five tribal shamans called igu, and two community elders, had attended the event.

While admitting that the myth does not match the archaeological evidence (considering that Lord Krishna was supposed to have ‘left’ Earth somewhere around 3100 before current era (BCE) and that the fort ruins are from a much later period), Swami said that stories of the myth are a recent trend. Detailed studies, he said, are required and that the fair is an attempt at ‘national integration’.

And therein lies the crux of the matter.

Myth or fact, the idea of ‘re-enacting’ the ‘heroic kidnapping was clearly driven with the motive to promote ‘national integration’ which would help cement Northeast’s ‘ancient link’ with the rest of the country and thereby somehow defy China’s constant claims over much Arunachal Pradesh’s territory.

Arunachal Pradesh chief minister, Pema Khandu, is reported to have said that the fair is a way for people “in far-off frontiers will have a sense of belonging and relate to rest of the states”.

One news report quoted Khandu as such: We watch in news channels today that some other country is claiming some part of Northeast. But nobody can change the history and the ancient history says that Arunachal was not a separate state but entire Northeast was one. For centuries, we have been with India, mainland India. This is our strength.

As the mela concluded, a letter arrived from the ASI stating that the Bhismaknagar Fort is not demarcated and that the ASI does not have a revenue map of the site. The letter, erroneously addressed to the deputy commissioner of Dibang Valley district instead of Lower Dibang Valley which was created in 2001, sought “information regarding the demarcation of boundary, revenue map, and land records”. The letter further noted that it had “on many occasions earlier faced difficulties in taking up developmental works at the monument/sites” and directed the government to schedule a joint-inspection.

As myth and history were being interwoven in Gujarat, the foundation on which the legend is based on suffers from a lack of attention.