SRINAGAR: Amid fears of protests, authorities today suspended mobile internet service in parts of Kashmir after a civilian was killed during a ‘cordon and search operation’ in the capital Srinagar where militancy has staged a comeback after years of relative calm.

A militant, believed to be a top Lashkar-e-Toiba commander, and an Army soldier, has also been killed in an encounter in south Kashmir’s Anantnag district today while a gunfight is underway in Budgam district where two militants are trapped in an encounter.

Official sources and locals told The Citizen few gunshots rang in the air in Qamarwari locality of Srinagar today at around 5 am. According to police, a group of militants were hiding in a residential house belonging to one Muhammad Yaqoob Malik. Police said the militants reportedly fired upon a search party of forces when they laid siege around the locality, prompting them to retaliate.

“A civilian identified as Saleem Malik, 28, son of the house-owner, was killed in cross-fire. The exchange of gunfire has stopped and searches are going on in the area to nab the militants,” a senior J&K Police officer said. The killing has prompted protests in the area with youngsters clashing with forces amid anti-India and pro-freedom slogans.

“There is massive deployment of forces in our area who are stopping people from coming out of their homes. In the distance, one can hear the sounds of protests and clashes,” Dr Khalid Mir, who lives in adjoining Noorbagh locality of downtown Srinagar, said over phone. 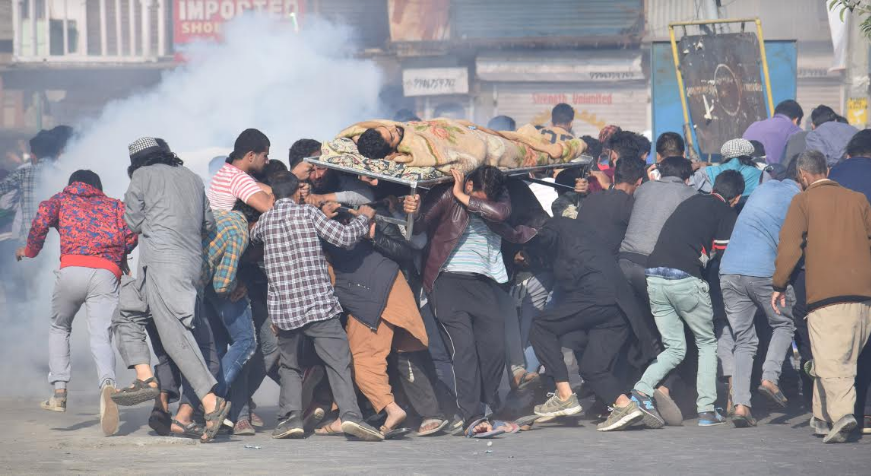 Officials said curfew has been imposed and police and paramilitary forces have been deployed in “sensitive areas” of downtown Srinagar to prevent the protests from spreading to other parts of the city even as locals blamed forces for killing the civilian in “cold blood”.

Meanwhile, a top Lashkar commander and an Indian Army soldier were killed while two more Army soldiers suffered injuries in an encounter in Gasigund village of Anantnag district, prompting the authorities to suspend mobile internet in the district.

Police identified the slain militant as Asif Malik alias Abu Ukasha, a resident of Khahgund village of Anantnag. He was reportedly an engineering graduate before joining militant ranks. The slain soldier was identified as Happy Singh and the injured are Bupinder Singh and Kulwant Singh of 19 Rashtriya Rifles.

In central Kashmir’s Budgam district, government forces are battling a group of heavily armed militants who are trapped in a mosque in Panzan village. According to reports, the militants were earlier trapped in a residential house but changed places after the encounter broke out.

“We have got the village elders to convince the militants to come out and give up their arms. We are hopeful that there will be no loss of life or property,” a senior police officer involved in the counter-insurgency operation in Panzan, told The Citizen.