SRINAGAR: Early snowfall in the Kashmir Valley has wreaked havoc on the horticulture sector, one of the mainstays of the state’s economy, with unofficial estimates pinning losses at over Rs 500 crores.

As the Valley received snowfall in November for the first time in nine years, farmers were caught off guard. Thousands of trees, some of them still laden with apples, have been severely damaged while unpacked apples laying in orchards were buried under snow.

In a video from south Kashmir’s Shopian district which has gone viral on social media, a farmer is seen crying like a child as he tries to retrieve his apple crop buried under mounds of snow in his orchard.

To add to the worries of farmers, thousands of apple-laden trucks on way to Delhi and other cities of the country, are stuck on the Srinagar-Jammu national highway which has been closed for traffic due to avalanches and shooting stones.

The unexpected snow also caught the state administration pants down with the Valley suffering major electricity breakdown and road blockades. On Sunday, the state’s power development department was able to supply only 50 MW power to the Valley where the demand is over 1800 MW during peak hours.

With the capital moving to Jammu for the next six months, the state administration came under fire on the social media for “abandoning” the Valley. To counter the opinion, the police department posted some pictures on social media.

However, the pictures only ended up becoming the butt of jokes for netizens. In one photo, a group of policemen, armed with shovels and ‘pickaxes’, were seen wearing life vests while clearing few inches of snow from an upscale area in Srinagar city. 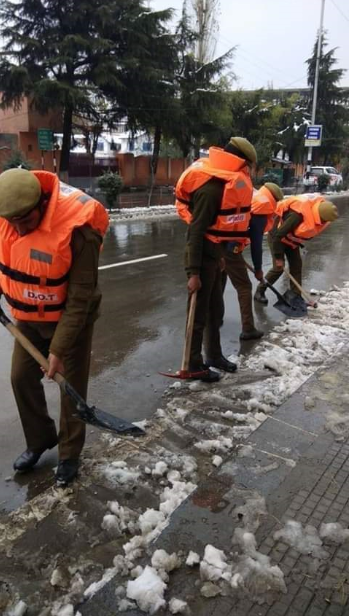 “Vision 2020: Presuming that snow might turn into floods, Jammu and Kashmir police clearing an inch snow from roads wearing floating jackets (sic),” Javed Dar, a Srinagar-based photojournalist commented on the picture which was widely shared on social media.

Following the intervention by the Governor Satya Pal Malik, the power department was able to restore electricity to some 60 percent affected areas, according to officials, while the work is underway in other areas that snow plunged into darkness since last three days.

Kashmir Chamber of Commerce and Industry, a conglomerate of businesses in the state, blamed the state government for delaying the implementation of crop insurance scheme “which could have proved to be of critical importance at this juncture.”

“Preliminary reports suggest losses over Rs 500 crore and irreparable damage to trees, plantations and orchards. We appeal to the whole community to stand behind our brothers in distress and extend support in whatever manner possible," a statement by KCCI said.