Jammu and Kashmir Governor SP Malik dissolved the Assembly even as he received a letter from former Chief Minister and People’s Democratic Party chief Mehbooba Mufti that with the support of the National Conference and Congress she would be staking claim to form the government in the state. 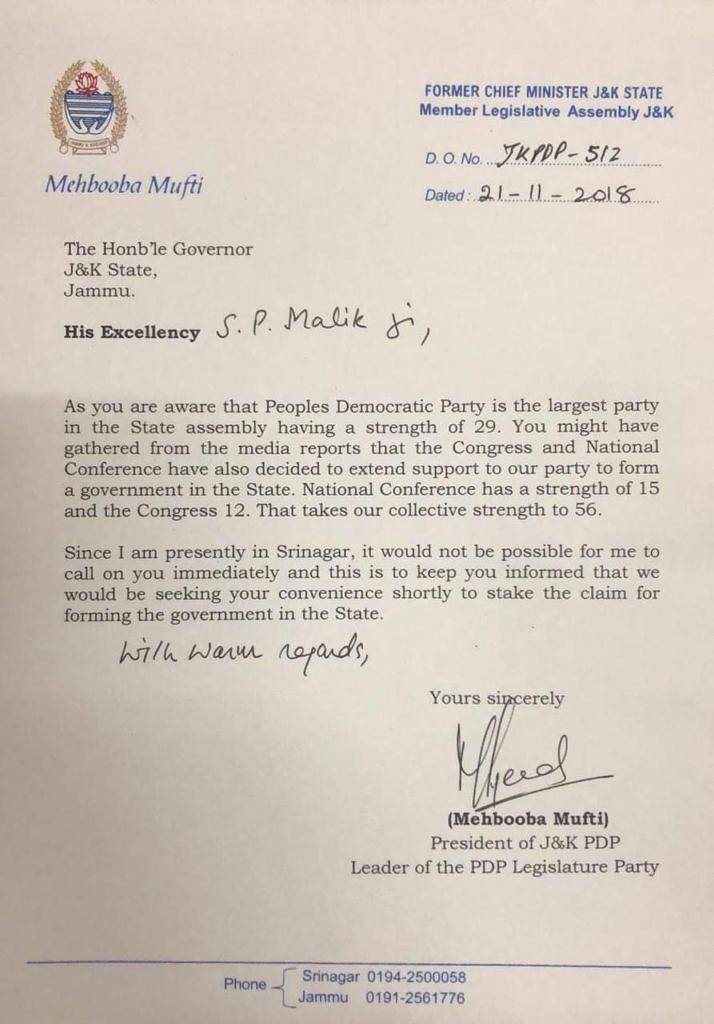 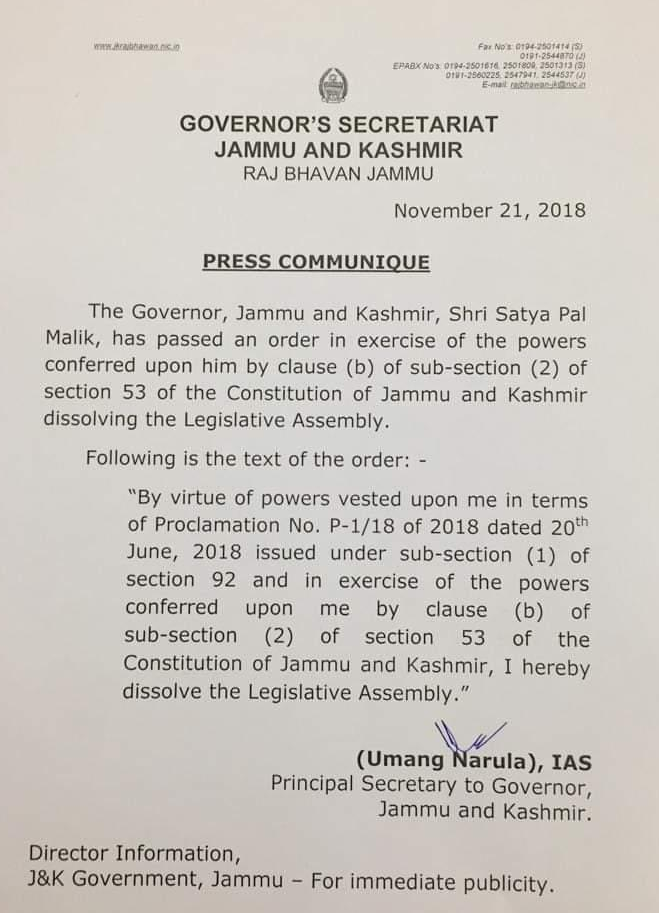 A new government seems well on its way in Jammu and Kashmir with Governors rule is expiring on January 19. Talks between the Congress, National Conference and Peoples Democratic Party seem to have reached an advanced stage with J&K Congress chief Ghulam Ahmad Mir confirming to The Citizen that a government is likely to be formed soon.

“We (PDP, NC and Congress) have arrived on a consensus and a formal meeting will take place in a day or two to chalk out future course of action. We are hopeful of forming a coalition government to keep the communal forces away,” he said.

Talks between the three parties have been going on since past one week, sources said. Confirmation came first from the senior Peoples Democratic Party leader Altaf Bukhari who told a local daily that “progress” has been made. Bukhari who has been rushing around trying to talk the three opposition parties into an alliance, said, “In view of the political situation and special status of the state, the three parties have decided to join hands. Article 370 and 35A are our main issues. All this is being done to safeguard these.

Former chief minister and working president of National Conference, Omar Abdullah, also indicated that some development may take place regarding the government formation.

“Who ever said ‘may you live in interesting times' knew what they were talking about,” Omar Abdullah tweeted.

If the three parties come together, they can comfortably cobble up a majority in the house of 87 with PDP having 28 legislators, National Conference 15 and Congress 12. This will enable them to easily cross the magic number of 44.

The coming together of two main regional forces (PDP and NC) has been prompted by fears of the BJP making inroads into the Muslim majority region. With the help of its ally, Sajad Lone, the recently concluded municipal polls and the ongoing Panchayat elections have given the party a foothold in the Valley.

Lone is being projected as the chief ministerial candidate but the numbers are not on his side. His party, Peoples Conference, has just two members in the legislative assembly and although he has managed to swing four MLA and an MLC of PDP into his fold, it will still not be enough to form the government. With the BJP's 25, Lone will still fall short of dozen seats to stake claim for government formation. This despite the support extended to him by PDP former Minister Muzaffar Baig.

Observers also interpret the move by the three parties to form the government as an attempt to stop the BJP from engineering defections in the regional parties and also to put pressure on the Centre to dissolve the assembly which has been kept in suspended animation.

“There are no plans to dissolve the Assembly. There are various civic issues which will be affected by this move. The decision to hold fresh Assembly elections in the State lies with the Centre and the Election Commission. I will give the report when asked for,” Governor SP Malik had said earlier.

J&K has a separate Constitution and Governor’s rule is imposed under Section 92 for six months after an approval by the President.

In case the Assembly is not dissolved within six months, President’s rule under Article 356 is extended to the State. Governor’s rule expires in the State on January 19.