'This is a First in 30 Years': Enquiry After Senior Scribes Denied Entry to Jan 26 Parade

SRINAGAR: The Jammu and Kashmir government has ordered an inquiry after several journalists, some of whom work with top international wire agencies, were denied entry into the main venue of Republic Day celebrations in Kashmir Valley.

“It is learnt that today at Republic Day parade venue in Srinagar some journalists were not permitted to cover the event as the security passes issued to them were found not to be authenticated. The matter shall be looked into,” Vijay Kumar, Advisor to Governor, who is in charge Home Department, said in a statement.

In an embarrassment for the state government, security forces yesterday barred several journalists from covering the R-Day function in summer capital Srinagar, prompting a boycott by the media fraternity.

The action comes days after the authorities prevented journalists from covering the funerals of three Lashkar-e-Taiba militants who were gunned down in an encounter in north Kashmir’s Baramulla district last week.

Touseef Mustafa, a senior photojournalist with the Agence France Presse (AFP), told The Citizen that he was going through the security check at the main gate of Sher-e-Kashmir stadium in Srinagar’s Sonawar locality when he was denied entry.

“Despite having a security pass of the police which is issued to media-persons through the state’s information department, they (security men) told me to go back, saying I have adverse verification report. I have been working for past three decades but this is for the first time that I have been stopped from covering this function," he said.

Witnesses said at least five photo-journalists including Habib Naqash, the Valley’s top English daily Greater Kashmir’s photo editor, and Mehraj ud Din of Associated Press, were among those who were stopped from covering the function.

“This has happened with me for the first time,” Naqash, who in the field for nearly three decades, said, “It was very unusual to see security persons turning us away despite the fact that we were carrying passes for covering the event,” Naqash said.

Sources said at least dozen journalists were not issued security passes for covering the main R-Day function in the summer capital where Khursheed Ganai, advisor to Governor Satya Pal Malik, unfurled the national flag and took a salute.

The journalists, who had already reached the venue, later decided to boycott the event and staged a protest at Srinagar’s Kashmir Press Club where they demanded action against the security forces who stopped them from covering the event.

In the battle of competing narratives, gagging media is not uncommon for authorities in Kashmir. Just last week, journalists were stopped from covering funeral prayers of three local militants in Baramulla.

Earlier this month, four photojournalists, one of whom works with Hindustan Times, were targeted with pellets by security forces during an encounter with militants in the restive south Kashmir on last Tuesday.

Meanwhile, in a statement, Kashmir Editors Guild (KEG) condemned the authorities for not allowing senior journalists to cover the Republic Day parade at the Sher-i-Kashmir stadium.

“The action by the security men on the ground suggests that the security establishment wishes to frighten the media by not allowing them to carry out their professional duties. Today's incident provides a grim reminder yet again about the fact that how vulnerable the media is in an area that is riddled with conflict and lawlessness,” said the statement.

“The state government should take stringent action against the police officers who sought to muzzle the press and take steps to create a situation where media can function freely and discharge its duty to the citizens by providing information on the happenings in the state,” the KEG statement said. 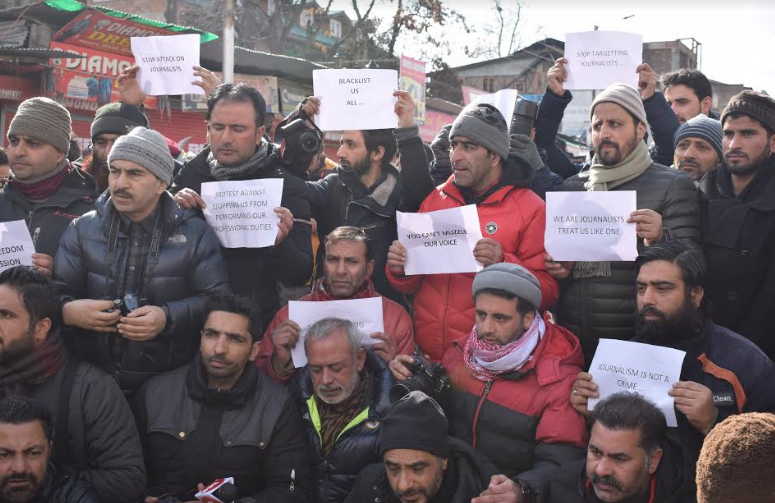