ITANAGAR: The normally routine Republic Day celebrations in Arunachal Pradesh went awry when the national flag fell off the post as it was being hoisted in at least two places in the state including at the formal event in Itanagar.

At the Indira Gandhi parade ground in the state capital, as Governor BD Mishra proceeded to hoist the flag before the national anthem began to play, the rope tied to the flag appeared to have been tied too tightly and fell to the ground.

A video clip of the incident showed the Governor gesturing to a high-ranking police officer to instead unfurl the flag and hold it up before saluting the tri-colour as ‘Jana Gana Mana’ played in the background.

A similar incident happened at Bordumsa in Changlang district where the flag could not be hoisted.

At another Republic Day celebration in Longding district in eastern Arunachal Pradesh, the flag was successfully hoisted, it flew upside down.

While the incident may have been an oversight, the state government is not taking a lenient view on it. 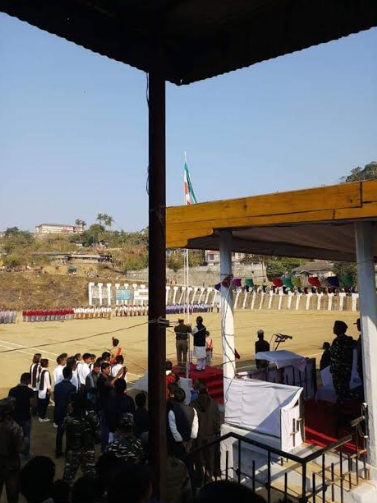 State chief secretary, Satya Gopal, on Saturday issued an official notice ordering an inquiry into the incident that “has caused great embarrassment to the Governor and his government besides inflicting insult on the national flag”.

Power commissioner GS Meena has been tasked with heading the inquiry and has been told to “fix responsibility and suggest remedial measures to prevent such incidence in future”. The order said that the report must be submitted to the state home department within seven days.

Another official order issued by the home joint secretary directed the state director general of police to “take action for immediate suspension of the flagpost in-charge under the relevant rules and submit action taken report to the government”.

The joint secretary’s order also said that a “proposal to register a case under the Prevention of Insults to National Honour Act, 1971 has been approved”.

The Act deals with matters related to the treatment of the national flag in public view.

It carries a maximum prison sentence of three years.