Northeast People are Indians, Not "Immigrants"

NEW DELHI: The Bharatiya Janata Party made a real gaffe in its “Vision Document” for Delhi polls which it released on Tuesday, being subject to jeers from not merely other competing parties but also from its voters.

With Delhi all geared up to vote this Saturday, the BJP might have pay a price for its blunder of calling the people from North-East India as “immigrants” in its Vision Document since north-easterners have quite a decent vote share in Delhi (at least in some particular areas).

On page 14 of the 24-page “Vision Document”, the BJP promised to protect the “north east Immigrants” by underlining certain measures that the party proposed.

A strategic move which was aimed at grabbing votes have rather turned against the party and has only managed to grab taunts and heckles from different spheres of the society.

Even though the BJP immediately went to the damage-control mode by clarifying that it was only a “clerical and a printing error”, the saffron party had by then already landed itself in a soup.

The Vision Document that the BJP released yesterday in place of a manifesto for the Delhi Assembly polls had a separate section under the heading “North Eastern Immigrants to be Protected” under which steps like setting up 24-hour helpline for the north-easterners and special police stations were stated. The Document, however, contained the word “migrant” in the subsequent paras under the above-mentioned “Immigrant” headline.

Congress Party, without wanting to miss this chance, was quick to react.

“The word immigrant is used when people move from one country to another, so does BJP consider people from the northeastern states as residents of some other country or the northeastern states according to them are not part of India? We demand that they remove that line from the manifesto and apologize to public”, Ajay Maken, head of the campaign committee for these polls (Congress) said.

He further mocked “If ruling party people are saying this then how will External Affairs Minister Sushma Swaraj be able to talk with China on the ‘immigrant’ issue”.

Even the AAP spokesperson echoed a similar stance.

Meanwhile, organisations of the north-east were also up in arms against the “ “typographic mistake”.

The North East Students’ Organisation (NESO )expressed its dismay and strongly condemned the BJP for terming the people from North East as ‘Immigrants’. “This very act of terming the North East people as ‘Immigrants’ or in other words ‘foreigners’ portrays the attitude and mindset that they have towards the People from North East. This mindset is even more amplified of the continued step motherly treatment that is being meted out to the north eastern region, the continued implementation of draconian laws like AFSPA etc, the unrestrained militarization of the entire region,” NESO chairman Samuel Jyrwa said.

All Assam Students’ Union (AASU) had a similar voice and termed this act as a product of “lunacy”.

“We have been fighting against the onslaught of immigrants for the past 35 years, and here is a political party – and that too the ruling party – which has termed the people of the Northeast as immigrants. How can we tolerate this? This is nothing but blatant insult to the Northeast. The BJP must tender an unconditional apology and it should come from the top, from the prime minister’s level,” said AASU advisor Samujjal Bhattacharya .

The Krishak Mukti Sangram Samiti (KMSS) went a step ahead and announced an agitational programme in protest against this vilification of the NE people by the BJP.

“Members of the KMSS will take part in a protest programme scheduled to commence at 11 am today (Wednesday) on the bank of the Dighalipukhuri to voice their protest against the above act of the BJP”, read a press release.

Tarun Gogoi said that it proves what he has been saying all along that BJP does not know much about North-east.

“Just because they termed us as immigrants does not mean we are not Indians. We are Indian and would continue to remain so,” he said.

Even the common people didn’t spare the saffron party and derided the “Immigrants” mistake. 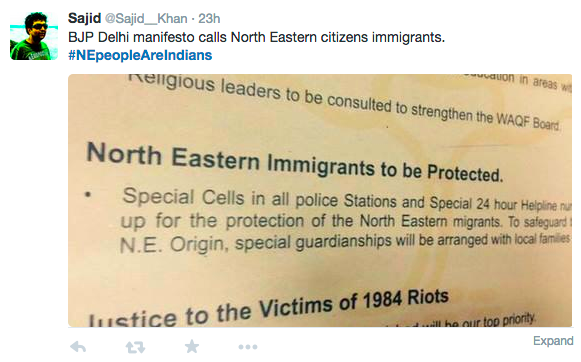