SRINAGAR: Hundreds participated in the funeral prayers organized for a chemist who had disappeared in the custody of government forces fourteen years ago.

Earlier, the family members of Manzoor Ahmad Dar had made a fervent appeal to people to participate in his funeral prayers in absentia.

The prayers, led by Peer Saifullah of Hurriyat (G), were held at the grounds of Government High School Rawalpora at 2 pm today in which thousands of people participated.

This is the first such instance in Kashmir that funeral prayers have been held for a person who had disappeared in the Valley during past twenty years. 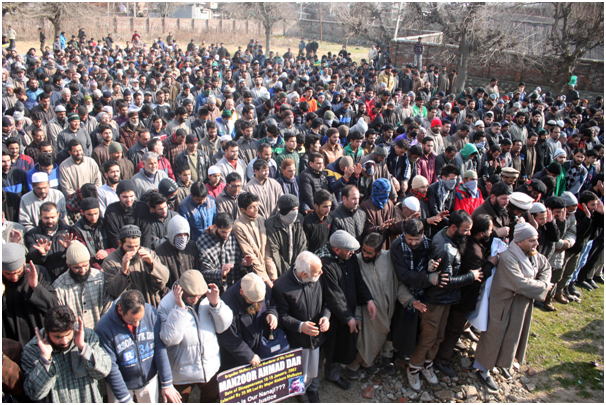 Rights groups say that around ten thousand people have disappeared, allegedly in the custody of government forces, during the years of turmoil in the state.

JKLF Chief Yasin Malik, who participated in the prayers, said that the family members of Dar, like other thousands of cases, face a psychological trauma.

“The women whose husbands disappeared in the custody of forces don’t know whether their husbands are alive or not,” said Malik, adding, “dialogue and these human rights violations can’t go together.”

Slogans in favour of freedom and Islam were raised during the funeral prayers.

Manzoor Ahmad Dar was picked up from his home at Rawalpora by unidentified gunmen on intervening night of January 18/19 in 2002.

Subsequently, during the investigation, the name of Major Kishore Malhotra (now brigadier) surfaced as an accused.

On November 26 last year, the Special Investigation Team (SIT) probing the custodial disappearance of Manzoor closed the investigation in the case.

It allegedly concluded that the victim could have died in custody of Army’s 35 Rashtriya Rifles led by Major Kishore Malhotra after he was abducted from his residence in January 2002 and his body could have been disposed of.