SRINAGAR: An Army installation in Handwara town, where protests erupted over the alleged molestation of a minor girl last week, was demolished Tuesdayfollowing intervention "at the highest level" by the state government and the Centre.

As the Prime Minister Narendra Modi arrived in the state to inaugurate a super speciality hospital in Jammu region, joyful residents and traders circled the Army installation in the main square of north Kashmir's Handwara town.

The crowd cheered as a bulldozer tore down its concrete pillars with many locals armed with iron rods joining in the process of demolition. 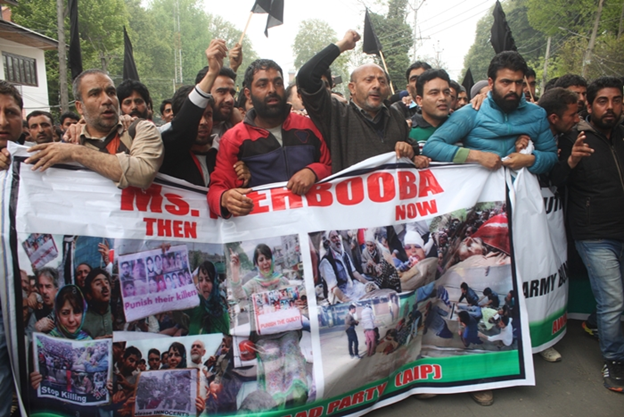 "We can't say that people are very happy. There was a demand to remove this bunker for past many years. It's unfortunate that it took the blood of five civilians to make it happen," Wajahat Rasool, a businessman based in Handwara, told The Citizen over phone.

Peoples Conference chairman and MLA Handwara, Sajad Lone, who was camping in the district, oversaw the demolition of the Army installation supervised by the district administration of Kupwara.

Deputy commissioner Kupwara, Rajeev Ranjan, said the area, which was renamed as 'Shaheed Nayeem Chowk', after the budding cricketer, Nayeem Bhat who was killed in firing by forces last week, will be handed over to the tourism department for development.

The chief minister Mehbooba Mufti spoke about the carnage in Handwara at a public meeting in the historic Katra town of Jammu region. The meeting was chaired by PM Modi who visited the state on Tuesday to inaugurate a super speciality hospital built by Mata Shri Vaishno Devi Trust in Katra and a sport complex.

“We have witnessed Baljarala, Chittisinghpora and more recently, Handwara where innocent people have been fatally caught in the vortex of violence. We need to take immediate steps to bring an end to this permanently,” Mehbooba addressed the PM.

"People of Kashmir are in pain and suffering. We seek your cooperation in addressing the issue so that no more innocent lives are lost to mindless violence," she added.

“I have great hope and expectations from my party’s alliance with the BJP. My father said on many occasions that when he shook hands with Narendra Modi, he was, in fact, joining hands with a billion people of India who had reposed their faith in his leadership,” she said.

In his speech, the Prime Minister invoked his predecessor, Atal Bihari Vajpayee's famous insaaniyat-jumhooriyat-Kashmiriyat lines for enabling peace and development of the state.

"Nobody was perhaps as emotionally attached to Jammu and Kashmir as Vajpayeeji. His slogan of 'insaaniyat' (humanity), 'jumhooriyat' (democracy) and 'Kashmiriyat' (composite Kashmir culture) is and shall continue to be our guiding principle for development and peace in Jammu and Kashmir," said Modi.

PM Modi also recalled Sayeed, who died AIIMS in Delhi on January 7, and said people of the state needed "quick paced" and "all inclusive" development as was the late chief minister's dream.

"We remember Mufti saheb. He spent years in public life. He had such a long political career and vision. One thing was always on his mind: To narrow down physical and psychological distances between Jammu and the valley," Modi said.

Meanhwhile, the J&K Police, which has registered separate FIRs regarding the violence in Handwara, Tuesday arrested one person in connection with the alleged molestation, which sparked a cycle of violence for past one week in north Kashmir.

Five civilians were killed while dozens of protesters and policemen suffered injuries during a week of intense protests centred in north Kashmir's Kupwara district against the alleged molestation.

Officials said Hilal Ahmed Bandey, one of the two accused identified, was arrested from Handwara and he is being questioned. Bandey was among the two persons named by the girl in her statement before Chief Judicial Magistrate.

His accomplice, who has been identified by the police, remains on the run.