A Software Engineer's Battle For Prohibition in Arunachal Resonates

ITANAGAR: Nabam Serbang is on a mission. Earlier this year, the former software engineer travelled across the length and breadth of Arunachal Pradesh’s mountainous terrain to rid the state of alcohol.

Alcohol sale in Arunachal Pradesh is not illegal as it is in Manipur, Nagaland (both in the north-east), Gujarat and more recently, Bihar. In fact, alcohol is easily and freely available in stores that dot the state’s landscape. A running joke being that there are more liquor stores than chemist shops in the state.

But apart from consuming Indian Made Foreign Liquor (IMFL), the indigenous tribal populations also brew a variety of rice and maize-based alcohol that are an integral part of many ceremonial practices and festivals. Which is what makes the efforts of Serbang and others a bit of an anomaly.

After working as a software engineer for seven years in Pune, Delhi, Bangalore and California, Serbang returned home in 2014. In his own words, he left his job where he earned over one lakh rupees each month "to contribute to society". 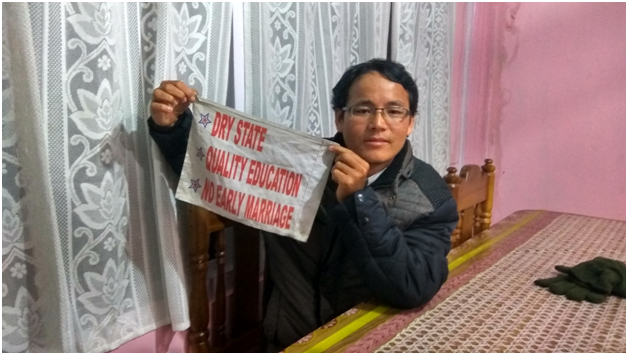 "I want to improve the quality of education in the state but the environment has to be good," he says. The 31-year old feels that the "environment" will improve with the introduction of prohibition.

Serbang was in the last stretch of his motorcycle journey and had clocked over 6000-km (over a course of over 50 days) when we met in a small dining room at hotel Dolma Khangsar in Tawang town on May 18. A small white flag with the words 'Dry State, Quality Education, No Early Marriage' was neatly laid out on the table as the bespectacled man claimed that alcohol is "destroying our youth".

"Alcohol is more easily available in our state than life-saving medicines," he explains passionately and adds that liquor stores do not follow the law when they sell alcohol to people under the age of 21.

Serbang says that crusade against alcohol stems from his belief that "our society is socially not matured" and that “our present society is not even 100 years old”. However, there may be another reason that drives him to pursue what he is pursuing; something more personal.

Originally from Hojuriangpa village in Sagalee, some 90 km from the state capital of Itanagar, Serbang is the eldest son from a brood of 14 surviving siblings.

His father, a gaon burah, has three wives (not divorced). Polygamy is still practiced among many tribes of the state and amongst the Nyishi community to which Serbang belongs, it is a common practice.

He is the son of his father’s ‘first wife’ and now lives in Naharlagun, 10 km from Itanagar, with his father, a few of his siblings and his “second mother” (his father’s second wife).

Serbang’s eldest sister passed away some years ago and he looked after her four sons’ education.

“Now her sons are also graduating this year,” he says of her second mother’s children and that he looked after many of his other relatives’ education as well.

His high-paying job may have helped finance his relatives’ education but at one point his own education was under threat.

“My father was an alcoholic and was not able to spend a single penny for my education,” he says. His mother would sell vegetables in Naharlagun to raise money for his education.

“My mother and other family members would constantly quarrel with my father for my educational expenses since he was drinking all the time,” he says. His father has now been sober for more than two years and has become, according to Serbang, “handsome, caring and loved by all”.

He says that alcohol was “conquering” his father and that there are “countless” others like his father who are spending their money on alcohol and “taking money from their wives”.

Having helped his siblings earn their graduation degrees and inspired his father to go sober, Serbang is now focussed on his crusade against alcohol and has opened an NGO, Drug-Free Arunachal. He wants to take his fight to the streets.

“This journey is to engage with other NGOs and get signatures” for his campaign. If he has enough people supporting him, Serbang will seek a referendum on the issue.

Travelling without a tent in his 150-cc Hero Achiever, Serbang says he’s had to rely on the help of people he comes across during his journey. Astonishingly, he travelled without any financial funding.

“I ask for free fuel from the petrol stations explaining them my situation,” he says, adding that he approaches NGOs and public leaders for help if he is ever refused, which has happened on some occasions.

The former software engineer says that he slept where his day ended of his experience of often shacking up at people’s homes.

He is also not too bothered by the loss of tax revenue that the state is bound to experience if prohibition were to be imposed, dismissing it as not being a large enough amount to affect the economy.

But Serbang may have an uphill task ahead of him considering that even in the remotest of villages where pharmacies and gas stations are rare to come by, liquor stores are ubiquitous. And while there isn’t any data available on alcoholism amongst the populace, there is other related information that indicates that there could really be something to be addressed.

According to data from the National Sample Survey, on an average, each Arunachal citizen spent Rs 127.32 each month from July 2011 to June 2012 on alcohol.

The national average for the same period was Rs 20.26.

In the 2011-12 financial year, the state’s monthly per capita income was Rs 6,007.58 per month, which means that people spent more than two percent of their income on alcohol. This is not taking into account money spent at bars and on locally-made rice beer, the sale of which is unregulated.

For the financial year 2014-15, the state government earned more than Rs 55 crore as tax from alcohol sales.

That revenue however, also went into funding the ambitious Chief Minister’s Universal Health Insurance Scheme that provides health coverage of up to Rs two lakh to residents of the state. However, some argue that if people stop consuming alcohol, healthcare expenses will come down anyway.

While Serbang is optimistic about his mission and has been enthused by people’s willingness to help him in his journey, there are mixed reactions to the idea of introducing total prohibition in the state.

The prohibition crusader has also found support from the Adi Bane Kebang (ABK), the top community organisation of the one of the largest tribes in the state- the Adis.

Every year during the Christmas season, the ABK asks liquor store owners in Adi-populated areas to shut shop in an attempt to cut down alcohol-induced crimes.

The ABK’s women wing president, Yalem Taga Burang, says that their campaign against alcohol is driven by the proverbial ‘social evils’.

“The root cause of all crimes is IMFL,” she declares confidently over the phone.

In most tribal societies of the Northeast such as the Adis, women are held in high regard and enjoy a great amount of freedom than in most patriarchal societies. Not surprising therefore, that the women leading the ABK have tasted much ‘success’ in their campaigns against alcohol.

Since 2013, no new licences for bars or liquor stores have been issued in East Siang district, home to a predominantly Adi populace thanks to the ABK’s campaign. As if that were not enough, the women often conduct unannounced ‘raids’ to apprehend people violating their diktats against drinking alcohol in certain places such as on the banks of the Siang river during after hours.

Buoyed by their success, Burang informs that they now want the three districts of Siang, East Siang and Upper Siang where the Adis are in a majority to be declared as “dry districts” on a “trial basis”.

“We have the memorandum ready and are waiting to meet the chief minister to present our proposal,” she says.

However, not everyone is in agreement that a total ban on alcohol is the right way to go.

Joya Tasung Moyong, one of the founders of Women Against Social Evils, says that prohibition can be counterproductive.

“I fear that prohibition will drive youngsters to drugs and so we must try to control consumption and create awareness about the harms of alcohol instead,” she says ensconced in a cane couch.

Moyong and her colleagues founded WASE after a falling out with the ABK over ‘several issues’ which included, but not confined to, differences over the style of functioning.

“We were quite aggressive in our approach to ensure alcohol is not sold illegally or to minors,” she says, adding that some of the locals have labelled her new group ‘Gulabi Gang’ after the more famous women activists group from Uttar Pradesh.

The way that the WASE works is that they conduct awareness campaigns trying to educate people about the harms alcohol can have. When not raising awareness, the women conduct raids.

Moyong says that they have a network of informants in and around 15 villages and localities around Pasighat town in East Siang district who tip them off if unlicensed stores are selling alcohol or if underage children are seen drinking. It’s highly efficient and they even have their own witness protection system in place.

“We never disclose our informers’ identities, even to each other,” she says.

Enthusiastic as she is Moyong, who has collected information of people who have died of liver cirrhosis and alcohol-induced accidents from the area in the recent years, appears to be a realist as well.

While she admits that rehabilitating alcoholics is a difficult task since alcohol is so freely available, she still says that at the end of the day it is awareness and education that will be their biggest tools.

(Cover picture of a village in Arunachal where prohibition has been accepted voluntarily. Second photograph: Nabam Serbang in Tawang)