SRINAGAR: Tension escalated in the summer capital Srinagar on Saturday after killing of a teenage student in Harwan area of the city last evening, following which the authorities imposed strict restriction in the city and peripheries in anticipation of protests.

The pellet ridden body of 11-year old Nasir Shafi son of Muhammad Shafi of New Theed Harwan was found near local water reservoir late last night after the protests in the area, residents of the area told media. Nasir had gone missing soon after the clashes on Friday evening.

“More than 300 pellets had pierced my son’s body,” said Nasir’ father. “The forces had chased people yesterday and since my son couldn’t run fast they had fired pellets at him and thrown him in a nearby area.” 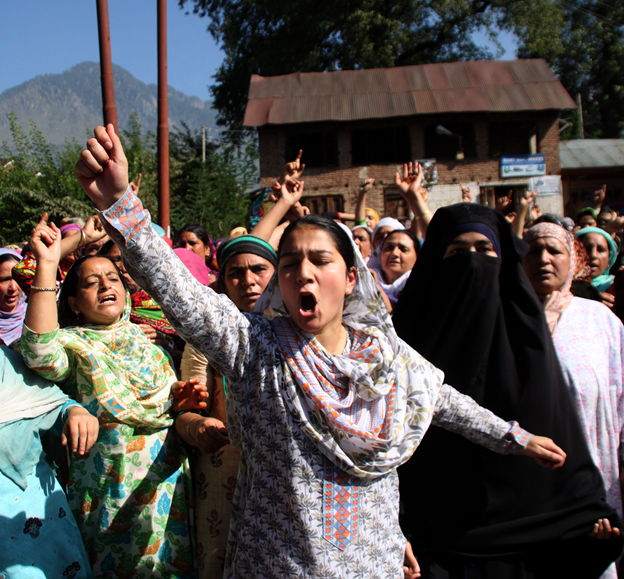 Thousands of people in Harwan today defied curfew to participate in Nasir’s funeral prayers. With the killing the death toll stands at 86 in the Valley where the unrest entered the 71stday today, post the killing of Hizb commander Burhan Wani onJul8 this year in south Kashmir.

There has been no let in pro-freedom protests and since Friday more than 150 people have got injured between protestors and forces in different parts of Kashmir which continues to witness clampdown on internet and mobile services, except BSNL, since September 12.

Journalists working with different media in and outside Kashmir today held sit-in protest in Press Colony against the gag on internet and mobile services. Carrying placards

“We are having this sit-in to protests the withdrawal of internet service which has hampered function of media. There has to be a permanent policy that the service is not withdrawn,” one of the journalists, who were part of the protest, said.

Meanwhile J&K police has arrested noted human rights activist Khurram Parvez from Srinagar, after he was prevented at New Delhi on Wednesday from boarding a plane to the Geneva to attend the ongoing session of the United Nations Human Rights Commission (UNHRC).

Khurram, program coordinator for the Srinagar-based Jammu and Kashmir Coalition of Civil Society Organization (JKCCS), was arrested from his Srinagar home late on Thursday night, according to his family sources.

“His arrest follows his detention on 14 September at the New Delhi international airport for approximately two hours. Following which, he was barred from travelling to Geneva, Switzerland,” said a statement issued by JKCCS.