Javadekar And Abdullah In War Of Words Over IIM Campus

SRINAGAR: A war of words broke out Friday on Twitter between union HRD minister Prakash Javadekar and former J&K chief minister Omar Abdullah, a day after the union cabinet gave its nod to set up an IIM in Jammu region of the state.

Mr Omar, who yesterday accused the PDP-BJP coalition government of playing "blatant bipartisan politics"in the state by setting up the IIM campus in Jammu region, instead of Kashmir, said the decision doesn't address the "inherent imbalance" of development of the state.

"Sir, according to you the whole country was mismanaged from 1947 to 2014 and you are too senior to me in age for me to argue with you," Omar responded today after Javdekar accused him of "mismanaging" the Prime Minister's scholarship scheme for J&K "through 2011-2014".

"Better not to politicise education @abdullah_omar. You know there will be off campus of #IIM in Kashmir Valley," Javdekar wrote on Twitter, to which Omar responded: "You mean an "Out Campus"! Thank you for your tweets but none of them address the inherent imbalance of your decision reg IIT & IIM."

The union cabinet yesterday cleared decks for setting up an IIM in Jammu region, the 20th in the country, sparking a political row in J&K with the opposition National Conference accusing the coalition government of "partisanship".

Earlier, the Prime Minister Narendra Modi led cabinet had cleared proposal for setting up of an IIT in the Hindu-majority Jammu region of the state, sparking a furore in the Muslim majority Kashmir valley where development has suffered a hit due to political turmoil.

"I'm not "crying foul over Jammu getting an IIM. I'm highlighting the hypocrisy of the people who for years screamed 'injustice with Jammu'. When Kashmir was awarded an AIIMS Jammu agitated, successfully, for its right to be granted one as well. Why this partisanship now?" Omar said in a series of tweets. 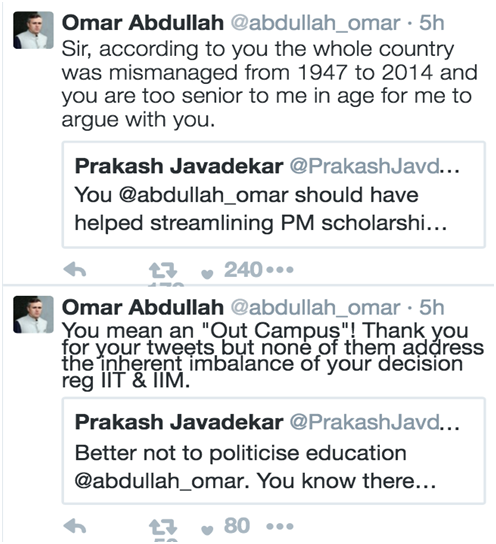 "And don't tell me an "out campus" is good enough because if it was the IIM would have been placed in Kashmir with the out campus in Jammu. This is just blatant partisan politics of the kind we have come to expect from the BJPDP. No wonder so much of the state is restive today," he said.

The controversy comes as the Kashmir valley is in the midst of a political unrest which has so far claimed lives of over 90 civilians while more than 12000 have been injured after security forces cracked down on anti-India and pro-freedom protesters in the last three months.