GUWAHATI: Assam transport minister Chandramohan Patowary’s ‘cheap’ remarks against a college girl, a victim of eve-teasing, has drawn sharp reactions from across the state.

The girl, a student of Jorhat’s JB College had posted her experience on Facebook which drew huge support. Following this, students and other organizations took to the streets seeking justice and safety for girls and women.

However, the minister, targeted the girl attributing political motives. “She is a member of SFI. Everybody knows that. She has taken a wrong step by posting her experience on the social networking site. She should have gone to police first,” Patowary told reporters during the ongoing Assembly session in Guwahati.

Former Assam chief minister Tarun Gogoi slammed Patowary for his remarks. “What does he mean? Is it so that only BJP people are safe in Assam? I would say, the girl has done the right thing by posting on Facebook. She must get justice,” said Gogoi.

Earlier, on February 8, the girl Subh Laxmi narrated her story on Facebook which went viral instantly. She wrote how everyday she had to live in fear of being teased by fellow commuters and bikers on the street. 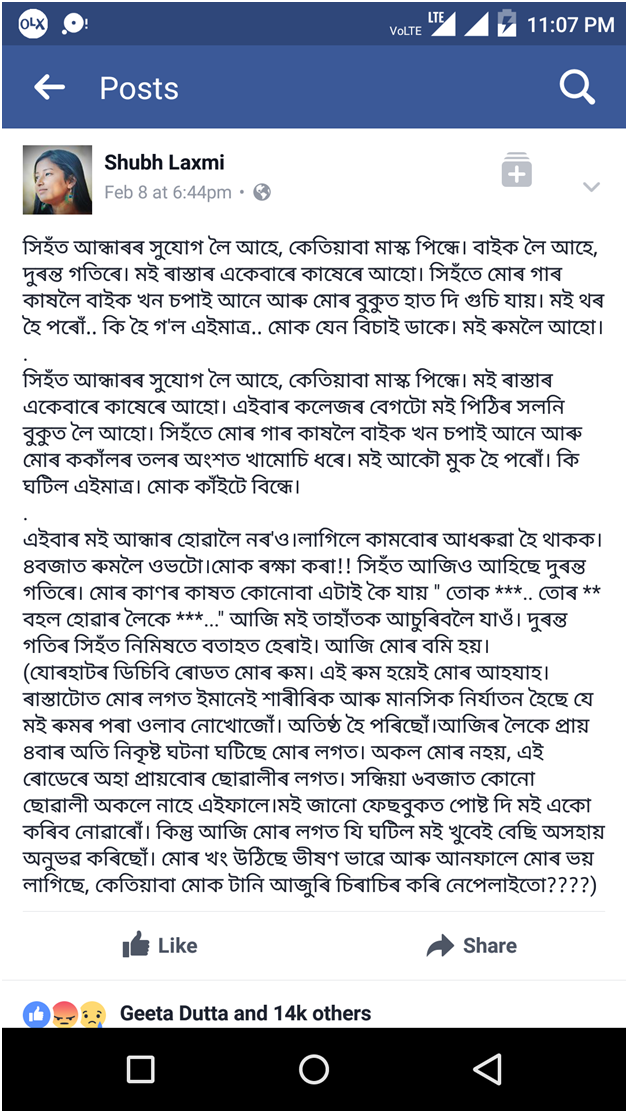 Following this thousands of students of different institutes and organizations across Assam have come out in support of her.

Parvin Sultana, an assistant professor at PB College in Dhubri termed it as very unfortunate.

“Sexual harassment of women continues because the perpetrators believe that they can get away with it. The callous remark by a Minister questioning Shubh Laxmi’s account of the episode further shows the negative bias against women who face such harassment. The Minister with his insensitive remarks is indulging in blatant victim blaming,” Sultana, also a known columnist, told The Citizen.

All India United Democratic Front (AIUDF) Legislature Party leader Hafiz Bashir Ahmed Kasimi condemned the senior minister for irresponsible remarks. “It’s very unfortunate. It indicates that the BJP government is notconerned about the safety of women, and is only interested in politicising the issue,” Kasimi said.

The students friends from the same college also criticised the state Minister, pointing out that they had not expected this kind of response.

Crime against women has been increasing in Assam over the years. According to government statistics alone, a total of 22,223 rape cases have been registered in the state from 2001 to May 2016. And 1,922 women have lost their lives in the same period of time due to dowry related issues.

From June 2016 to January 2017, 1,294 rape cases have been registered and 97 women have died due to dowry related issues in the same period of time.