Kashmir Fast Turning Into a "Do or Die" Zone: 3 New Indicators

Kashmir Fast Turning Into a "Do or Die" Zone: 3 New Indicators

NEW DELHI: When there is a vacuum, even a tentative effort to fill it is welcome. At least in theory and in the abstract. But when it is applied to volatile Kashmir, where the students of schools are now leading the protests across the Valley, and local youth-turned-militants are openly appearing to give four gun salutes to slain colleagues the little is so insignificant that it can do more harm than good in immediate terms. As if it fails, as it will without sufficient nerve and strategy, it will close even the tiny option that is available at this present juncture.

2017 has changed the nature of protests in Kashmir with now the separatists barely being heard from, except for the odd statement. Till 2016, despite the deep provocation of pellet guns that killed and maimed young people all across, the Hurriyat leaders were still able to retain control over the protests with their strike calls, and protest calls being heeded. But they sensed they were losing control, and as some of them told this writer, “we have no choice but to follow the mass sentiment and keep calling for strikes, as if we don’t no one will listen to us, and you can imagine what will happen then.” The fear amongst the separatist leaders then, as it is indeed now, is that the rebellion will become armed, and that will lead Kashmir and of course India to a situation far worse than the dark days of the early 1990’s.

Three highly significant shifts have taken place in the last few weeks. And this is major by any standards applied to conflict zones. 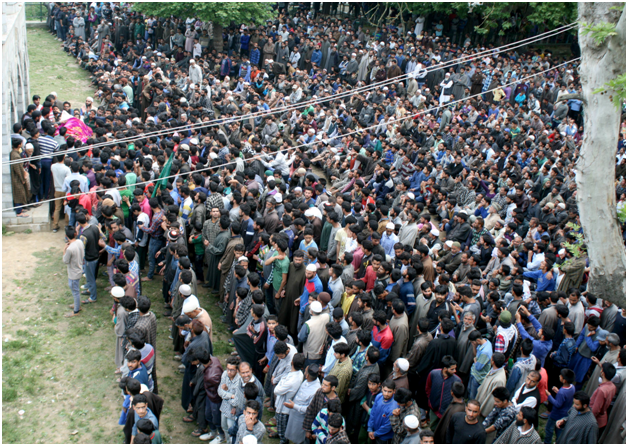 One, these columns had earlier noted the increasing attendance of local masses in funerals of militants. Till even two years ago such funerals barely drew a crowd. Now in the past weeks, the shift has the masses from not just affected, but also the neighbouring areas, gathering for the funeral of any person killed by the forces in an encounter, or a clash in above the waist firing. But increasingly so the masses are also emerging from their homes to prevent the encounters from taking place, walking determinedly to the spot in a bid to rescue the militants---usually locals now---with the government forces finding it difficult to cope. This is happening repeatedly, even as the spate of ‘encounters’ increase along with the increasing ‘search operations’ launched by the Army.

Two, students have taken over the protests all across the state. Young school children, including girls in large numbers, have taken over literally, clashing with the armed police and the Army, throwing stones, being injured or killed, and yet continuing the fierce demonstrations. This was not so earlier with the stone pelters young adults, with only a few young teenagers visible in the protesting crowds. Now young school students are in the lead, or active participants in direct clashes with the armed government forces. The defiance and the absence of fear for their own lives is the part of the new, more lethal resistance that is building---or indeed has been built---in Kashmir in the absence of even a minimalist ‘reach out’ strategy by the ruling political powers.

Three, as the photographs attached to this article show, the young militants are appearing without masks as such funerals to give a ‘gun salute’ to their fallen comrades. Sources said that militants are now largely local, with the Kashmir protests acquiring a local resistance hue. 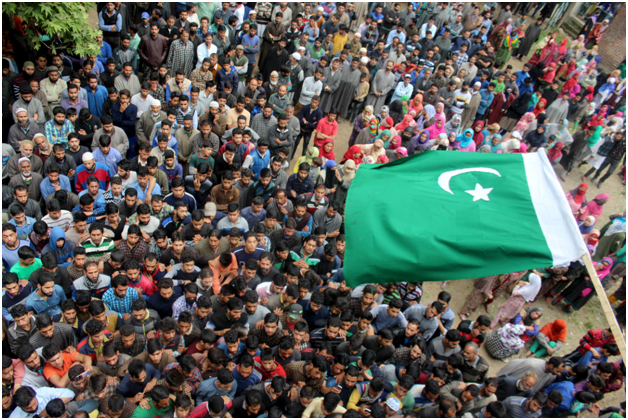 Retired Army generals with experience in Kashmir have been writing about the need for a dialogue. The apprehension in the forces is of the return to a situation where the political masters sit back, and actually preside over a direct confrontation between the people and the Army, a situation that most democracies would like to avoid. The Army in India has never been happy about such situations, and even during counter insurgency operations in Kashmir in the 1990s the push was always to get the political leadership to take over control of the areas cleared by the troops. A senior General, now retired and close to the current dispensation in Delhi, told this writer earlier of how necessary dialogue was, and how essential for the political governments to take ownership of the state “instead of leaving management to the Army.” He has not repeated these words in recent months. But others have, with some generals being attacked mercilessly by right wing trolls for even suggesting dialogue.

It is clear that the BJP government is clinging on the sledgehammer as the only approach in its strategic bag. The Opposition knows this, and is making some tentative moves to come together on the issue of Kashmir. The Congress that had completely dropped the idea of the talks---started initially by former Prime Minister Atal Bihar Vajpayee with all sections of Kashmiris---has set up a panel to explore the resumption under Dr Manmohan Singh. Others are in talks with the Congress, including BJP leader Yashwant Sinha who has been insisting on talks as the only option. However, it remains to be seen where this effort goes, as many involved, are still hesitant and tentative about their own position on the border state.

If the Opposition steps in it will have to carry its intervention to its logical conclusion, as a start-finish operation will add to the alienation and the despondency in the Valley. It will make it apparent that even the Opposition parties have no strategy for talks, and are not prepared to think out of the box in dealing with the state that is now literally in the throes of what many young people there believe, a ‘do or die’ battle.

Manmohan Singh Did Not Deserve This Rude Response 3 hours ago

In Lockdown Emerges a Digital Space for Art 4 hours ago