NEW DELHI: The RSS linked Arogya Bharati has been running programs for producing “fair, tall babies” with “high intelligence”; even if the parents are dark, short and with low intelligence. All this according to Arogya Bharati “experts” can be done by following Garbhasanskar, claimed to be ancient Indian wisdom.

They have even set up Garbhavigyan Anusandhan Kendra , a so-called research centre in Jamnagar, Gujarat. Garbhavigyan Anusandhan Kendra not only promises the parents of “getting the best progeny”, but also the “desired sex of offspring”. And all by regulating the “mental and physical status of the partners, time of copulation” and a host of such hocus pocus measures.

The press has already linked the desire for intelligent, tall and fair babies to Germany's eugenics program and Nazi Germany . Arogya Bharati's Garbhasanskar brings out the underlying racial beliefs in the RSS regarding colour and superiority. Remember Tarun Vijay's statement how “we” have been living in harmony with “them”, the dark skinned South Indians? It is this eugenics program for breeding a true “Aryan race” that not only killed an estimated 6 million Jews and half a million Roma (of Indian descent) in Hitler's gas chambers, but also led to the sterilisation of 400,000 “inferior” Germans .

Neither was the practice of forced sterilisation limited to Germany. The US sterilised about 60,000 womenunder its eugenic sterilisation laws, upheld by its Supreme Court, and repealed only in 1974 . Its immigration policy characterised the Irish, East Europeans Jews, Asians and Africans as the inferior races. Eugenics was far more widespread in the west than the west is willing to admit today.

It is obvious that the seeds of the eugenics ideology of superiors Aryan race was shared between Nazism, and the RSS. Munje, one of the ideologues of the RSS, had travelled to Italy and was deeply influenced by Mussolini's fascism and militarisation of politics via Black Shirts. Golwalkar writes approvingly of German racial pride . The passion with which the Hindutva ideologues identify India with the Aryans, cannot be understood without understanding its belief in racial superiority; hence the desire to produce tall and fair babies, very much in the mould of Nazi Germany's desire for blond and tall children.

The eugenic inspiration for Garbhasanskar has appeared widely in the press. What has not yet been examined is Arogya Bharati and its Garbhavigyan Kendra claims, and whether they fall foul of the law. While the Kolkata High Court's interim order restricts Arogya Bharati's exercise on May 6th and 7th in Kolkata only to a set of lectures, it has yet to pronounce on the legality of offering services such as “uttam santati” (super babies) and “desired sex of the offspring”.

There are two sets of laws that Arogya Bharati and Garbhavigyan Kendra violates. One is related to what is the The Drugs and Magic Remedies (Objectionable Advertisements) Act, 1954. It is clear that the claims and practices under Garbhasanskar, are in clear violation of the Act. According to Hitesh Jani, the national convenor of Arogya Bharati and an “expert” on Garbhasanskar, genetic engineering can be also done in the womb by following Garbhasanskar. This is in violation of all genetics that we know today, and utter nonsense masquerading as ancient knowledge. Such claims are precisely the ones that the Magic Remedies Act bans.

The “corroborative evidence” the propagators of Garbhasanskar offer is equally ridiculous. Ashok Kumar Varshney, an RSS pracharak and the national organising secretary of Arogya Bharati, said to Indian Express (May 7th, 2017), that the project was inspired by what a senior RSS ideologue learned 40 years ago in Germany. Varsheny said, “He was told that it was due to a woman called ‘Mother of Germany’. When he met her...she told him, ‘you have come from India, have you not heard of Abhimanyu (the son of Arjuna in the epic Mahabharata)?’ She told him that the new generation in Germany was born through Garbh Sanskar and that is why the country is so developed.” Of course, neither the RSS ideologue nor the “Mother of Germany” are identified by Varsheny.

It is always interesting to find how the Hindutva ideologues invariably quote western figures for proving their claims. Whether it is the unknown German Mother, or a David Frawley, the proof of the validity of the Hindutva cocktail masquerading as “ancient wisdom” is always a western figure. All those who rail against Macauley, invariably bow to the superior wisdom of the west, as long as it supports their half-baked and crazy theories.

The Drugs and Magic Remedies Act is not the only one that the Arogya Bharati and its various affiliates violate. By offering to create babies with desired sex, they are also violating Pre-Conception and Pre-Natal Diagnostic Techniques Act, 1994 (PCPNDT Act). The main purpose of the PCPNDT Act is to prevent sex selection, and what Arogya Bharati claims Garbhasanskar can do by following its program.

The issue is not simply the violation of law. By claiming to be able to deliver a baby with a desired sex, the RSS is reinforcing the desire for male children in India, a desire that has seen female foeticide and steeply declining sex ratios. In some states such as Haryana, Rajasthan and Gujarat, the sex ratio of the girl child in the age group of 0-6 years is as low as 834, 888 and 890 per thousand respectively. Not only does RSS's Garbhasanskar reinforce racial stereotypes, but it also reinforces patriarchy.

Is Garbhasanskar ancient Indian science? If we look at the material that Arogya Bharati and Garbhavigyan Kendra has provided, there is nothing remotely connected to any serious ayurvedic text or ancient science. There is an air of authority regarding ancient texts and ayurveda, none of which are either referenced or quoted. What is offered instead, is finding right time for copulation, kind of diet that both parents should have, reciting various mantras and listening to devotional music, all offered as “ancient wisdom”.

If we examine Garbhavigyan Kendra's website and claims, not as an ideological exercise, but as a purely money making venture using fake science, we get a completely different picture. There is a page on the site, which is supposed to detail success stories regarding infertility. Two pictures of babies, obviously not Indian (yes, they are fair!), named Kate White, The flu1 and Kate White, The flu 2, with details in Latin are presented as success stories. A casual visitor might believe that these two babies were the result of Garbhasanskar. The reality is that the web template used to create the website, has such gibberish Latin as a simple placeholder for text. These are not success stories.

The Kendra has made no attempt to provide any proof that its so-called cures work, presumably as it might open them to investigation and fraud.

The Kendra also has a video ; yes this is the only video, I could find on its site. The video was intriguing as it carries nothing remotely resembling the mumbo jumbo of Garbhasanskar. The mystery becomes clear when we come to the last part of the video: it gives US toll free numbers, and websites to contact in Wisconsin for would-be-parents. It is a video ripped off the Internet, and uploaded on YouTube by a Barb Scot , who has nothing to do with Garbhasanskar! 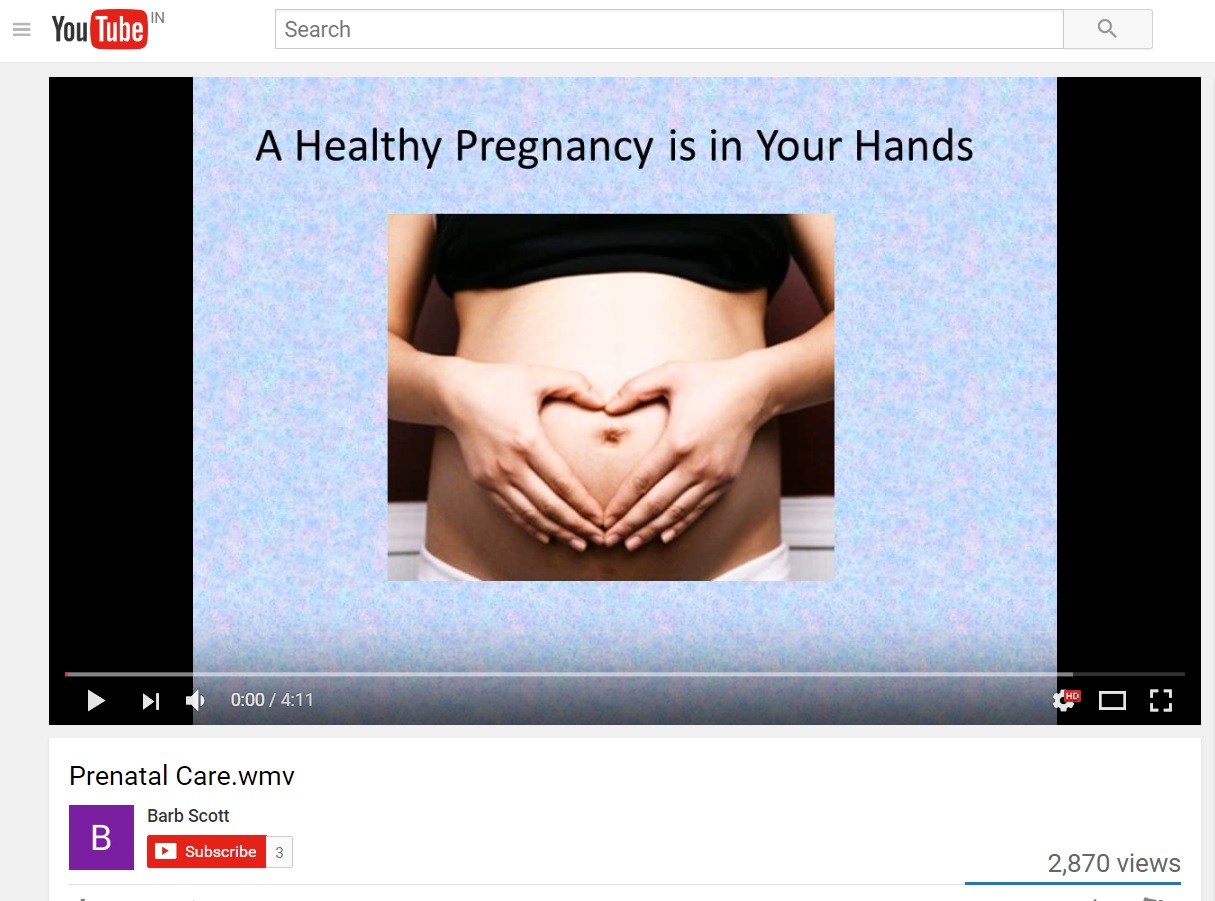 There are other websites, one of which calls itself DivyaGarbhasanskar.com, which also market this claptrap. It is a much better website than Garbhavigyan Kendra, and openly a commercial venture. It is run by one Dr. Anand Dhingra, who claims to be a medical doctor. The organisation offers as a part of its team, a NS Parmar, who it claims has been living without food and water for the last 24 years. In other words, Dhingra is selling pseudo science using a medical degree. Not very different from what David Frawley, close to the RSS, does through his US website, vedanet.com.

Garbhasanskar is clearly a successful money making activity of Arogya Bharati. Gullible parents are duped by pseudo science and talk of ancient wisdom, throwing in Mother of Germany, Vivekanada and Abhimunya as examples, and then selling them “counselling”, “ayurvedic medicines”, CD's etc. There is clearly a market for this, not only in India, but also in the NRI community abroad. This is what possibly the RSS wants to tap. Apart from reinforcing racial stereotypes and patriarchy.

(Courtesy Newsclick.The article reflects the personal views of the writer)