Strategic Partnership - How Long Will We Dither?

The Defence Procurement Policy (DPP) 2016 was released by the then Defence Minister Manohar Parrikar in February 2016 with much fanfare during the Aero-India Exhibition, but with without few appendices, which were added later. However, the most important void was the chapter on Strategic Partnership (SP) which is vital for the ‘Make in India’ project to take off.

As per media reports, the Defence Minister backed PMO, is pushing for setting up the private sector to play a major role in the production of weapons systems for the armed forces. Actually this did not require much research for firming it as the basic policy. Looking at countries like the US, Britain, Germany, Japan, South Korea etc, it is the private sector that is behind state-of-the-art defence products, China being the exception where anything and everything including your soul belongs to the state. In contrast, India has been nurturing the white elephant in the DRDO which has been the bane behind continuing imports of bulk of our defence needs.

It may be recalled that at the time of release of DPP 2016, when private companies were looking up to bag multiple production offers including mega orders for aircraft, submarines, land systems (traditional stronghold of the public sector), disagreements within the government as to what should be the SP model, left them high and dry. This was not surprising with part of the bureaucracy on DRDO payroll, aside from perks like free holidays to places like Tirupati in India, as also foreign trips. It is not surprising that our governmental-defence-industrial complex has remained so pathetic despite joint secretaries of MoD and Defence Production on all their boards – DRDO being the goose that lays golden eggs for them. In his book ‘Wings of Fire’ Dr APJ Abdul Kalam (much before he became President) identified major technology void. Under his chairmanship in 1995, a Review Committee set the goal of 70% self reliance in defence requirement by 2005. But in 2014, we were still importing 70% of ourdefence needs.

Then during Manohar Parrikar’s tenure as Defence Minister, US$ 3 billion was found lying forgotten in a Washington account for years, earning interest for US Department of Defence. Similarly, $8.3 billion was found lying unused with PSUs – paid as advance over the years. Wonder how many more such shocks are in store? And there is no move to reorganize the MoD anyway – so it remains a cozy nest where everyone is snug. According to an internal audit, while the total amount outstanding from PSUs is Rs 55,892 crore ($8.3 billion), most of it is (Rs 51,573 crore) with HAL. Besides, these are advance payments made since as early as 1975 which have still not been accounted for”. DRDO also spent Rs 5 crore for building a silver chariot for a temple in Pune without reference to MoD but then this amount is just pocket change for the white elephant; the joke being that when the scam broke, DRDO clarified it was to test technology for ‘battery-operated’ chariot, which MoD quietly swallowed. 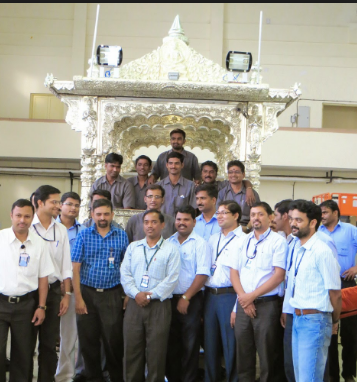 Getting back to strategic partnership, top private sector representatives from industrial bodies were reportedly invited by the MoD on May 11 for discussions on the progress made with respect to the SP policy, and discussing possibility of taking up of four projects in first phase of the strategic partnership project — new submarines, naval utility helicopter, single-engine fighter aircraft for the IAF, and FICV for the Army.

The irony all along has been that there is little concern about the mounting criticalities of the military and widening combat capacity gap vis-à-vis the PLA. To this end, the Defence Minister pushing for major role of the private sector in defence manufacturing is a welcome step. However, reports are emerging we may again be going around in circles, with issues like grand-parenting and price discovery, on which there is no meeting ground. If this be true, then what have we been doing past 15 months, and is this by design because of vested interests?

MoD is reportedly of the view that “at least” two strategic partners should be allowed in each segment so as to arrive at a “reasonable” price discovery otherwise it may lead to a monopolistic situation. Some of defence firms have said they will not support “open competition” in a particular program in which they already have the required competencies; for example for procurement of helicopters only companies with proven track record in producing helicopters be selected as strategic partners.

There are actually two ways to look at such objection: one, contention be agreed to which may help reduce selection time, and; two, in an open tender, firms with proven track record in producing particular item would automatically get preference, even extra points in selection process could be earmarked for them. Post this meeting, a MoD release stated, “The Ministry is working towards institutionalizing a transparent, objective and functional mechanism to encourage broader participation of the private sector in defence manufacturing under the Make in India framework.”

The Defence Acquisition Council (DAC) is slated to meet on May 15 to decide on the draft policy, but whether a final call will be taken during this meeting is anybody’s guess. But the fact remains that keeping the decision in limbo adversely is affecting the defence of the country. In a country like ours, satisfying everyone is an impossible task especially where big money implies fierce competition.

Under the proposed SP Model, one company would be selected for each area based on its competence, which would then tie up with the original foreign OEM selected through the procurement process, to build the platform in India with transfer of technology (ToT).

While the finer points are to be discussed during the forthcoming DAC meeting on May 15, disheartening news is media report quoting un-named officials, expressing confidence “that the policy can be finalized in the next few months”. Government needs to take final decision on issues like, in the proposed SP Model, since one company will be allowed to undertake only one strategic project and not qualify to compete for others, it is disadvantageous to companies like Tata and L&T that have been investing in multiple defence product fields.

On the plus side while DPSUs have been treating their private sector counterparts as contractors, and private sector players have not been getting government support to get ToT from abroad, these issues are addressed in the proposed SP model, which is good.

According to some sources, six major Indian companies will be able to qualify on financial grounds to be chosen for strategic partnership model; L&T, Tata, Mahindra & Mahindra, Reliance Defence, Bharat Forge and Adani Group. Since the SP policy aims to boost manufacturing of critical defence armaments by private sector, government must take a final decision without further delay.

The fact that 15 months after release of DPP 2016 we have not yet arrived at the SP Policy despite the framework provided by the Dhiendra Singh Committee, is sad commentary. Concurrently, red-tape must be reduced as India still way behind in terms of ease of business. This should include a more liberalized FDI policy; either open up 100% FDI in defence or eliminate the red tape while considering 100% FDI on case-to-case basis.

(Lt General P.C.Katoch is a vetern of the Special Forces)