Why Does the Otherwise Powerful PM Modi Invoke Gandhi to Stop Violence?

NEW DELHI: Prime Minister Narendra Modi is perceived to be the most powerful PM but he chooses to use his influence and power selectively. He is often criticized for being autocratic but while dealing with violence and growing incidence of mob lynching, he anomalously prefers to be a Gandhian.

PM Modi can hardly be described as a Gandhian, although he is seen doing things associated with Gandhi — like wearing Khadi, posing for photos while rotating Gandhi’s favorite symbol, the charkha, often invoking Gandhi in a magniloquence manner, and routinely citing his belongingness with Gandhi’s Gujarat origin.

But even PM Modi’s staunch supporters would not like to call him a Gandhian. If anything, he could be called a staunch Swayamsevak, just like his BJP predecessor Prime Minister Atal Bihari Vajpayee; the only difference being Vajpayee, when under attack, would show occasional sympathy to the Muslims only to correct it at party events calling himself as ‘Swayamsevak first and Prime Minister later’.

In contrast to Vajpayee, PM Modi hasn't even shown the slightest remorse about the violence on Muslims that has visibly accelerated under his tenure at the centre — only bolstering his politically beneficial narrative of “Hindu us” vs “Muslim them”. His infamous analogy of puppy under his car remark while talking about Muslims being killed in the Gujarat pogrom cannot be forgotten.. When it comes to violence on Dalits, he choses to be either quiet as in case of the Saharanpur anti-Dalit riots or use levels of drama as in case of Rohith Vemula’s suicidal death.

But often, Prime Minister Modi chooses to be Gandhian in approach in tackling the violence perpetuated by the likes of Gaurakshaks or cow protection squads feeling emboldened since his ascendence. Speaking at an event commemorating the 100th anniversary of Gandhi’s Sabarmati Ashram on June 29, PMModi said that any kind of violence is “unacceptable” and Gandhi and Vinobha Bhave would not have approved of such violence in the name of cow, adding that nobody has “right to take law into their own hand”. He also fondly recalled his earlier days when he used to ask the BJP workers to replace “Vaishhav Janato” in Gandhi’s famous bhajan and replace it with “elected representatives” to read it like:

One who is an ‘Elected Representative’ knows the pain of others
Does good to others without letting pride enter his mind.

Can this statement of the Prime Minister be called as strong enough? Will it be sufficient to curb the violence?

Rakesh Sinha of the RSS wrote an Opinion piece on NDTV calling Modi's words as “stern" and lamented the left for their “Toxic RSSism”. He wrote that Modi’s statement “categorically disowns the perpetrators of violence and at the same time directs state governments to prevent such occurrences in the future. "

But what stern warning of the PM is Sinha is talking about? There has been no action given to the state in PM's recent message and no follow-up regarding last years call to Chief Ministers to create a dossier on “fake cow groups”.

Notable that this is only the second time that Modi has spoken against the violence unleashed by cow protection squad against the Dalit and Muslim communities. Last August, in Hyderabad, when the Prime Minister spoke against anti-Dalit Una atrocities, he rhetorically asked "if you feel like attacking someone, attack me, not my Dalit brothers. If you want to shoot anyone, shoot me, not my Dalit brothers”.

The PM’s latest statement too, is neither strong nor sufficient. The problem of his ‘strongest attack’ on cow protectors is two-fold. One, he appeals to their conscience and doesn't threaten them with the consequence of committing the crime. An otherwise strong PM choses to talk about conscience and not consequence when it comes to violence on Dalits and Muslims in the name of Cow.

Second, he appeals the cow protectors to not take law into their own hands. The statement is tricky as it suggests that a crime has been committed for which the law should punish them and Mob lynching is akin to taking law into their hands. Note that in all cases —Dalit flogging in Gujarat, Pehlu Khan lynching in Rajasthan and Akhlakh lynching in Dadri —the deceased were proven to be innocent and had not committed crimes under the prevalent anti-cow slaughter laws of the respective state. The Una Dalits were skinning a dead cow, Akhlakh didn’t posses beef and Pehlu was taking cows for milk procurement business and not for slaughter.

Also, in all such the instances, the Prime Minister, who also happens to the most powerful person in India, invokes only emotional reference, pain, shame and anguish and avoids talking about ensuring strictest punishment to those involved in the violence.

PM Modi’s Hyderabad speech of 2016 hypothetically asked the state to create a dossier on the fake-cow protection groups, to which there has been no follow-up or action till date.

His Sabarmati Speech has no action plan to curb the violence either. It simply just expresses how the violence would have been “unacceptable” to even cow-lovers like Gandhi and Bhave. PM Modi merely urges and emotionally appeals to the nation that “violence is not the solution to the problem”.

How Gandhi dealt with Caste violence and Untouchability

Clearly PM Modi is at odds with what he practices and what he preaches. But invoking Gandhian way of emotional appeal to the perpetrators of crime seems to be a convenient way to avoid responsibility to self and leaving it to the ‘conscience’ of the oppressor. Gandhi often raised the conscience question while fighting social evils like caste system and communal riots. Particularly on fighting the caste system, he appealed to the “inner-self” of the Caste Hindus rather than talking about empowering the ‘untouchables’ through political safeguards. 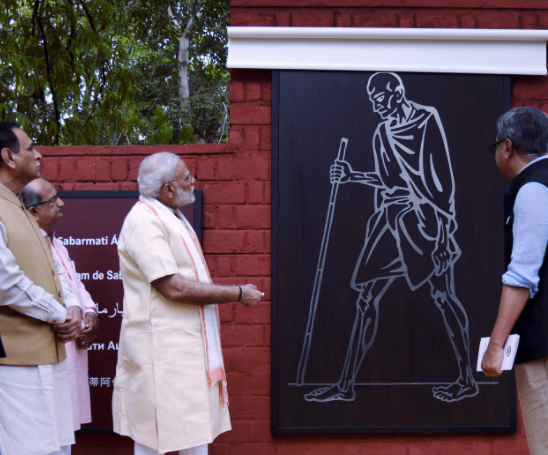 This approach of Gandhi put him at direct odds with Dr. B.R. Ambedkar who advocated political safeguards and legal measures to fight casteism instead of emotional appeal and did not want to put the onus on stopping the atrocities on only the oppressors’ conscience.

In his book written in 1946, What Congress and Gandhi have done to the Untouchables, Dr Ambedkar quotes Gandhi’s position vis a vis demand of political safeguards by Dalits “ It is the superior class of Hindus who have to do penance for having neglected the ‘Untouchables’ for ages. That penance can be done by active social reform…The Welfare work for the Untouchables is a penance which the Hindus have to do for the sin of Untouchability.”

PM Modi seems to be anxious to be so good to the Upper caste Hindus that he does not care if he is thereby becoming good for nothing for the Muslims and Dalits.

This is not an attempt to compare Gandhi and Modi as they stand poles apart but only the position they took while encountering untouchability and mob lynching respectively.

After all, PM Modi’s politics survives on the Hindu’s hatred of Muslims, first formed through the Rath yatra of the 1990s and then reinforced in an even more vitriolic manner today through Whatsapp and Facebook.

In light of this, the Prime Minister continued persistence with appealing to the conscience of upper caste Hindus is as problematic as was Gandhi’s.

Shouldn’t the Prime Minister speak on this issue with the sense of authority of a leader who enjoys complete majority in the House rather than resort to emotional antics? Since his words are like gospel within his party, shouldn’t he ask his Cabinet and Chief ministers to obey his order to stop mob lynchings, in the same manner they listen to him for his pet projects, Swacch Bharat and Yoga Day? Since he is said to be working round the clock, can’t he call a chief ministers meeting and ask them to enforce laws to have the order restored and lives of Dalits and Muslims saved?

The votaries of #StopMobLynching movement have put forth an idea of MASUKA (Manav Surakha Kanoon) or Human Safety law to ensure there is a legal cover to prevent a new kind of mob violence. But the PM seems to have other ideas.

Perhaps PM Modi just wants to be seen as concerned about the lynchings but does not want to take any concrete step or action on curbing it. A Gandhian approach then perfectly fits the bill — where the convenience of emotional rhetoric is always preferred over the invocation of the Constitution and legal consequences.