An Indian Express story published on August 3 based on the Delhi University (DU) circular on the cut off marks for the PHD admission for Mathematics reeks of bias. The story titled “Delhi University: PhD Mathematics cut off for SC/ST at zero, shocked students take to twitter” by Express Web Desk not only lacked data but a basic fact check. 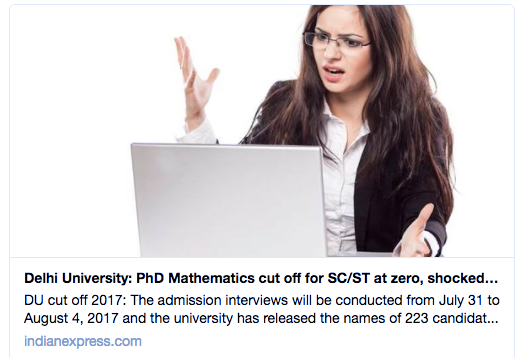 The internet link of the story was accompanied by an image of a frustrated woman looking at the computer in disbelief. On its Facebook account, the Indian Express wrote “ 94% for General Category, and 0% for SC/ST! Is this FAIR?”

With its strong headline and graphics, If the intent of the story was to create sensation and invoke extremely strong anti-quota reactions, then it was quite successful. The FB post of Indian Express went viral and was liked more than ten thousand times and shared two thousand times. 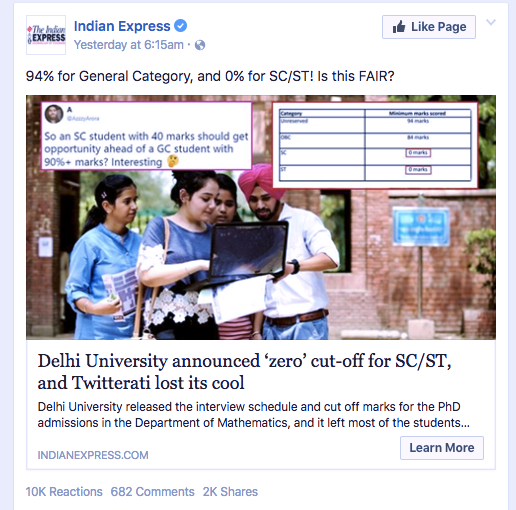 India Today too quoted the Indian Express story and published its own story with headline “ Zero cut-off at Delhi University (DU) for PhD Mathematics for SC/ST students, twitter reactions” and published separate sets of anti-quota tweets.

Indian Express’s barely 150 word story was specifically intended at PhD admission to Mathematics and no other department. The report started with an opening remarks “The University of Delhi has released the interview schedule and cut off marks for the PhD admissions to the Department of Mathematics. While the cut off for the unreserved categories was held at 94 per cent, the cut off for the scheduled caste and scheduled tribe categories was at zero.”

The story added that “Students were shocked when they noted that SC/ST candidates did not require even basic passing marks of 30-40 per cent in order to be eligible for the PhD mathematics programme. A number of them took to Twitter.” The express gave images of twitter reactions including the one from Ankur Singh ridiculing the merit of SC ST OBC students.

How DU Actually Messed Up

The Delhi university published on its website, a list of students from all categories who have been asked to appear for the interview from July 31 to August 4. The link clearly stated that it was an interview schedule on the mathematics website. The footnote is what Indian Express picked up from this circular and made a sensational story. The footnote read, “All those who have appeared in Entrance with following score or more: Unreserved -94 Marks, OBC - 84 Marks, SC- 0 Marks, ST- 0 Marks.” 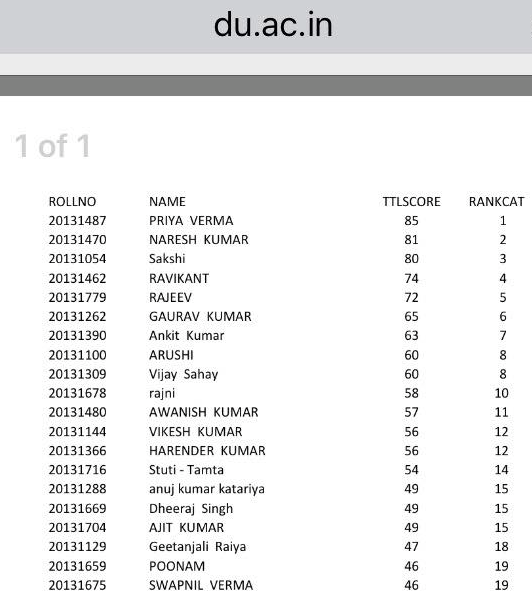 Apart from the interview list, the DU website also had a result link for the PhD entrance exam. Comparing the two lists, one can see that the lowest marks for the SC and ST Candidates selected for interview was 46 and 57 marks respectively. Importantly, none of the candidates of SC ST who were called for the interview received zero marks.

In such a scenario, what was the reason behind DU putting in its circular a ‘zero cut off marks for SC and ST students’?

Clearly, the circular of the interview schedule was either erroneous or had malicious intention. As the result page on the DU shows, lowest marks received by the candidates who appeared for written examination was 46. This bursts the ‘zero cut off theory for SC/ST students’.

The entire story of the Indian Express was based on a link of DU’s list of candidates selected for interview post the written examination. The Indian Express team neither checked the marks of the SC ST Candidates shortlisted by DU nor contacted DU for clarification for the bizarre cut-off. It must be noted that only the Mathematics department issued such circular and not any other departments.

Even a layman with access to internet would have checked whether any candidate with zero or near zero marks has been called for the interview.

The list of candidates was easily available online on the DU website. But it appears IE desk was in such a hurry to publish this sensational news against SC ST students that it did not deem fit to contact DU and publish their reactions.

Dilip Mandal, former India Today journalist, took to Facebook to expose the lies of the story by Indian Express. He wrote that out of the total SC ST Candidates — and he gave a list from DU — shortlisted for PhD in mathematics, none have scored a zero. So why this is done by both DU and the media. Why didn’t the media not ask questions to DU about this cut off which was factually wrong?

Sadly, IE had neither time nor space to publish that. Also, had Indian Express published in its story any sentence or quote questioning or contradicting the logic of the bizarre cut off, it would have demonstrated balanced perspective. Moreover, by hiding the story that the Entrance Exam toppers from departments mentioned above were reserve category, the express team writing the story showed a clear bias against the reservation policy.

Note that, It did not publish in its story, any comments from twitter or Facebook that rejected the cut off theory or contradicted the Express story. Among the many hateful comments against SC ST, the Express received few angry comments just like one from Atul A.

The Delhi University is yet to correct and clarify on the bizarre and misleading cut off shown on its web page. At a time when Universities are reducing the total number of seats, such news item is definitely going to invoke strong and emotional reactions from non reserved category students, fueling the anti-quota sentiments once again.

Mr. Hans Raj Suman who is the Member of the DU Academic council criticized the circular and said, “The circular on the website of DU is erroneous and was issued to spread confusion. Can a SC students post graduating with Mathematics have zero marks in the entrance? This is clearly to malign the image of SC/ST OBC students and enquiry must be conducted on the controversial circular. The media too should not publish such news without fact checking as it has long lasting impact.”

The reserved quota provided for socially underprivileged students is to make their representation at the academic level. Sadly, such malicious circular by the University and media’s sensationalization, reinforces the notion that such bodies, who comprise mostly of Upper castes in their respective top echelons, leave no stone unturned to show that SC/ST and OBC lack merit and that the prevalent quota system is horribly unjust. The opponents of the social justice policy of reservation use such ready-made stories to further spread venom in the society against the underprivileged community.

The DU must clarify or retract its circular. The Indian Express too should issue regret and retract its story, lest it will lose its respect as a newspaper with a difference and dent its image of Journalism of Courage.

(This article appears on the Opinion page)