Can a Judge Ever Be a “Political Eunuch”?

Can a Judge Ever Be a “Political Eunuch”?

“It is now regarded . . . as a cardinal feature of judicial impartiality that the judge should be a political eunuch. If he [she] was ever a member of any political party or organization, he must sever all ties on appointment. Thereafter he must do nothing which could give rise to any suggestion of political partisanship.”

At the heart of Justice Jasti Chelameswar’s press conference in New Delhi, on January 12, 2018, together with three other sitting judges of the Supreme Court of India, was a crie de coeur, not too dis-similar from the dictum enunciated by Bingham, almost two decades ago, in the epigraph. What is that mandate? A judge should be completely free of any political persuasion while sitting on the bench, irrespective of the national import of the case before her.

It is effortless to fudge and gloss over the concern of the four justices by stating, as done by the print and visual news reports in most Indian media, that it is merely “a matter of allocation of cases to the Supreme Court’s benches,” or, simplistically stated, “it is an internal matter,” or, yet again, that the Chief Justice is the Master of the Rolls and no one can question this judgment. Were it so and the last certainly is, the exceptional press conference would then have thoroughly lacked in substance and by now matters would have been resolved. Have they? No, according to reliable news reports.

“Facts are stubborn things; and whatever may be our wishes, our inclinations, or the dictates of our passion, they cannot alter the state of facts and evidence,” remarked John Adams, the second U.S. President (1797-1801). Facts make the letter read out by Chelameswar, however opaque, intractable. So matters have yet to be resolved. Can they? Will they? This is no mere mechanical tweaking or course correction. 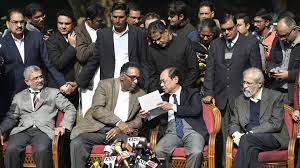 The concerns voiced with deep anguish, reinforced eloquently and visibly by body language, though couched by their very nature in ambivalence are about political ideology of all the judges at their core, particularly of those who participated in their public voicing. Plainly, politically ideologies are not in sync all around the various benches and probably will never be, nor should they be. We live in a political world. That is the plain truth!

What further complicates the judicial situation is that the executive branch of government wants a supine and pliant judiciary. Is this true? Examine the executives’ hollow allegiance to democratic statutes, the ceaseless attempts to mark and vilify its opponents as anti-national, the ushering and toleration of violence, and the great alacrity in denying civil liberties and muzzling the media.

When cases are brought to the apex court on each of these crucial aspects of democracy, the executive leadership demands, and not so subtly, that the judiciary rule in its favor irrespective of the evidence and law. Therein lies the matter of allocation of cases to those with perhaps proven partisan credentials and possibly paves the road to judicial nemesis.

(In part 2, a specific historical example will be examined for its validity in the light of Bingham’s prescription.)