Rahul Gandhi In Singapore: The Truth Vs The Fake

Theoretically and empirically, I have many points of disagreement with Rahul Gandhi. I disagree with his unfettered celebration of connectivity and fiber optic cables when narrating the story of India at the cost of obfuscating the narratives of poverty, in access, and inequality.

His monolithic celebration of the digital as the panacea obfuscates the food insecurity, absence of access to healthcare, lack of labour protections, poverty and extreme inequality experienced by large cross-sections of India’s poor. That laying a network of fiber optic cables that connects all villages across India is not going to solve the chronic problems of food insecurity and farmer suicides plaguing India needs to be debated.

The techno-deterministic vision he offers for an India of the future is seductive, but only does lip service to India’s constitutional commitments to a “secular socialist republic.”

Without addressing through policy the structural contexts of poverty and inequality, the rapid diffusion of technology will have a limited role in serving a large cross section of the Indian population; this is a point I would like to spar with him on.

Why I attended the dialogue

Yet, these disagreements are precisely the reasons why when I received an email invitation from the Lee Kuan Yew School of Public Policy to an event titled “India at 70,” I decided to attend his talk.

I wanted to listen to Rahul Gandhi offer a narrative account of the India he weaves together in explaining the past and an imaginary of the India of the future.

Although I do continue to question his monolithic account of a growth-driven successful India, I came away from the event convinced of his commitment to the Indian vision of democracy, pluralism, and argumentation.

Not only in what Rahul Gandhi articulated as his vision for India, but much more fundamentally in how he handled the question and answer session, his openness to dialogue and difference stands out as the pillar of his imagination of India.

And this imagination is critical in a climate of authoritarian control that quickly silences debate by framing it as anti-national.

The question, a family, and economic growth

In the twitter-sphere, one snippet of conversation from the Rahul Gandhi talk in Singapore has gone viral.

When the floor was opened up to the panel, one P K Basu, an author of a book “Asia reborn” asked: “Why is it that during the years of your family ruled India, India’s per capita income was growing less than the world average and yet in the years since your family relinquished the prime minister ship of India, India’s per capita income has grown substantially faster than the world average.”

The question itself, in its texture, framed as the personal, referring to the Nehru-Gandhi family, reflects the poor quality of discourse in Sanghi talk, directed at the lowest common denominator.

In its long history building up to the liberalization in the 1990s (which is implied in Basu’s question as the juncture of the supposed turn in the economy), India has had a number of other prime ministers.

Beyond its poor framing however, reflecting its neoliberal agenda, the question assumes that growth in per capita income is the only metric for success of governance.

In doing so, the question ignores the much larger and important question of resource distribution in a country such as post-independence India, recovering from colonial rule and inheriting vast inequalities.

The redistributive policies in India building up to the neoliberal reforms of the 1990s (which were initiated not by the Bharatiya Janata Party, but by the Indian National Congress under the leadership of Rajiv Gandhi, P V Narasimha Rao, and Manmohan Singh) were critical to the nation’s constitutional commitment to building a “secular socialist republic.”

These policies, including reforms in land distribution, developing a public food distribution system, building a public education infrastructure, and developing a strong health care infrastructure that reached out to India’s rural margins were critical to providing a baseline of welfare to a large percentage of India’s poor, and offer a vital model for India’s global leadership. This leadership, through the Non Aligned Movement (NAM), established a framework for development for many newly decolonized nation states in the 1950s and 1960s.

Basu’s question on growth, with its obvious penchant for the market, is motivated toward attacking the foundations of Nehruvian socialism, which is the much repeated trope deployed by the Sangh and its affiliated Right Wing economists in their blind propaganda for the free market.

In the fake news world of the BJP-media, Basu quickly became a Professor (the last I checked, he is not appointed as a Professor in any of Singapore’s Universities) and his question morphed into the frame of “grilling Rahul Gandhi,” suggesting as if there is evidence-based argumentation in his question that had Rahul Gandhi cornered.

The notorious fake news source of the Right, Postcard News posted an article titled “In Singapore, Rahul Gandhi gets humiliated in front of a huge crowd!!! Do you know why he got nervous and started to drink water when an author asked question on his family?”

Using a fake image of Rahul Gandhi drinking water from another event elsewhere where he is shown surrounded by people, whereas in the Singapore conversation, he sat on the stage, the article then goes on to reproduce the personal attack on him.

“We are talking of none other than the scion of Gandhi dynasty, Rahul Gandhi, who takes great pleasure in insulting the world’s biggest democracy, especially in foreign land. The day when Rahul Gandhi had insulted India in University of California, Berkeley, the Congress should have had understood his potentials and should have had put a break to his foreign tours. But Rahul Gandhi has done the damage once again.”

A personal attack on the Gandhi family based on a weak argument is projected as exposing Rahul Gandhi’s “true knowledge” and him having done damage to the image of India abroad.

Tweeted Amit Malaviya, in charge of the BJP’s national information and technology, including an edited excerpt of the video, “When Rahul Gandhi could not answer what his family's contribution to India is!!”

The notorious fake news-churner, Arnab Goswami, in “#RahulVideoRow | Did Congress edit the video to show Rahul Gandhi had an upper hand?,” turns Basu into a Professor, lending him credibility he has not earned.

Contrary to the propaganda on the Sanghi twitter-sphere, Rahul Gandhi’s conversation at the Lee Kuan Yew School was a much needed public diplomacy for India that held up the image of India as a global leader that offered Asia and the world lessons in dialogue, the spirit of democracy, the basis of democracy in reasoned argumentation, and the fundamental role of difference in a democracy.

In response to Basu’s question, Rahul Gandhi responded “and what is your hypothesis?”

To this question, Basu put in a plug for his book, without presenting any evidence or substantiating his claim, “I asked you the question. Hypothesis is in my book. Please read the book and it’s called Asia Reborn.”

The non-argument offered by Basu is so full of fallacies that it leaves little room for critical engagement.

The assumption that the poorest country in the world should be growing faster than the world average in order to close the gap is one that is entirely unaware of global inequalities, dependencies in international relations, and the power imbalances in global political economic relations that constitute growth trajectories.

The growth-driven obsession of the question strategically obfuscates the vast global inequalities that have been produced precisely by a neoliberal model of development preoccupied with growth, and oblivious to the question of distribution of development outcomes and opportunities.

According to an Oxfam report ‘Reward Work, Not Wealth,’ India’s richest 1% garnered as much as 73% of the total wealth generated in the country in 2017 while 67 crore Indians, who comprise the poorest half of the population, saw one percent increase in their wealth. In the same period, the wealth of the elite group increased by Rs 20,913 billion.

These critical points though are lost on the uncritical celebration of the neoliberal model that one often sees in an upwardly mobile, Sanghi economist diaspora, itself often brought up paradoxically by a publicly-funded education system in India grounded in its socialist vision.

Rahul Gandhi then wraps up the conversation by inviting Basu to dialogue. He notes:

"Look, I am a person who has been taught to love my opponents, love people who might dislike me. I have absolutely no animosity toward somebody who says, I have achieved nothing. I even respect your opinion to be able to say that to me. I respect it. I differ with it. I will contest it. If you come and have a serious conversation with me, I might even be able to convince you or not. I am happy to do that.”

To applause, Rahul Gandhi notes,“I am proud to sit in a room and have a gentleman say this to me. Now, there's something else... Mr. Narendra Modi would never do that. You would never have the ability to say what you said to me in front of Mr. Narendra Modi and I am absolutely blazingly proud of that.”

He concludes with, “After this meeting I want to give you a hug and I want to tell you, you are very important to me because of represent an opinion, and I respect that opinion.”

That a senior Member of Parliament in India and the leader of the opposition can openly take a question that is a personal attack, keep his humor, continue to engage the audience member, and wrap up the conversation with an invitation to dialogue is a lesson for many leaders across Asia for whom political leadership is the pathway to the authoritarian exercise of power and control.

The invitation is also a lesson on the pluralism that forms the everyday fabric of Indian democracy.

This habit of argumentation is the fundamental idea of India, an imaginary that offers concrete points of reference to working toward a plural world amid the deepening tendencies of polarization.

Juxtapose the tenor of the conversation here with an interview Narendra Modi, the current prime minister of India, participated in with the noted Indian journalist, Karan Thapar.

In the interview, Modi is grilled (true to the meaning of the word), asked if he will state he regrets the pogrom in Gujarat that killed Muslims and that the government should have done more to protect the minority population (Modi was then the Chief Minister of Gujarat, and his government had been accused of having a role to play in the Gujarat pogrom).

Modi is seen stopping the interview to drink water, taking off the microphone, and walking out of the interview.

One that wraps up the conversation that begins with a personal attack on him by an audience member by inviting the audience member to a dialogue, and another that abruptly ends an interview with a noted Indian journalist because he is asked if he will publicly apologize for the Gujarat pogrom.

Rahul Gandhi’s visit to Singapore is an important anchor to an Asian imagination on the possibilities of democracy grounded in pluralism, a fundamental openness to difference, and an openness to dialogue.

I will continue to disagree with Rahul Gandhi both theoretically and empirically, and I cherish his idea of India. 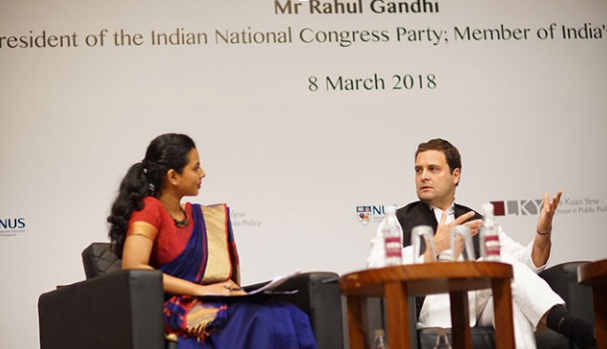 Mohan J. Dutta is Dean’s Chair Professor of Communication and Director of the Center for Culture-Centered Approach to Research and Evaluation (CARE) in the School of Communication, Journalism, and Marketing at Massey University.