The 8 Year old Girl Rape: The Silence and the Complicity Of All Who Claim Kashmir

NEW DELHI: The 8 year old girl was kidnapped while herding horses. No attempt was made by the authorities to even look for her, with her body being found after a week, raped and tortured by hate driven maniacs, as initial reports now verify.

The first response by the Kathua police was to get rid of the evidence, with her blood soaked apparel being washed before being sent for forensic examination. The crime scene was not preserved, a search was not carried out, no one was interrogated and it was as if the terrible crime had not been committed. It is only after her poor family, and the people at large, created a storm that a couple of police officers have been arrested along with others, and at least the semblance of a probe seems to be on.

This was countered almost immediately by a little known organisation the Hindu Ekta Manch that organised a pro-rape rally in Jammu. This was attended by two senior ministers from the state Chandra Prakash Gupta and Lal Singh , a participation that sent out a vital message of support from the alliance partner in government in Jammu and Kashmir. Several demonstrations have been held since in both Jammu and the Valley, the first demanding release of the accused, the second demanding justice.

The Kashmiris are not wrong in asking over and over again that if they are indeed part of India why is the treatment meted out to them so very different. Look at the treatment of the rape that is brutal, merciless, and political. What can be worse for a little girl, and for India.

The Silence: In Delhi. Women’s organisations, feminists, busy bodies, political wings don’t seem to be even bothered about the rape and its brutality. From the gender perspective it tops the horror list, as Kathua rape victim was a minor, she was kidnapped, she was locked up by the maniacs for a week, she was tortured repeatedly, raped repeatedly and then killed. No women’s delegation has visited the spot to console the bereaved family, and more importantly to convey the message that India cares. There have been no rallies and no protests by the political parties demanding action against the rapists, by the women organisations, no reaction at all to the sheer brutality of a clearly political rape in which a ten year old child spent her last week on earth in sheer terror and pain. A minor was used in the worst possible manner, and only the Kashmir Valley seems to be batting for her. The Kashmiri nomads are a peaceful, gentle community, carrying history and tradition with them.

The State: The BJP has made it clear it is supporting those who are supporting the rape. As always speaking in two voices, the government has ordered the probe, and the party has supported those who are supporting the rapists, with its two senior ministers participating in the pro-rape rally. The PDP under Mehbooba Mufti has protested, and for the first time has been compelled to actually move against its ally in government and take action against the rapists. The sane voices are too terrified to speak out in Jammu, and the rape is being used now to completely communalise the environment with protests demanding release of the rapists. The initial probe has revealed that the intent was to scare away the nomads from Kathua, and prevent them from coming down in the winters, or contemplating residence in the vicinity. The plan was hatched accordingly, executed, and is now being supported at different levels with the state police coming under immense pressure. The rally in Jammu today is part of this, an assertion of the communal politics that incited the rape.

The Aftermath: Little 8 year old girl became the guinea pig for those hell bent on breaking Jammu and Kashmir apart. There has been no healing touch, with the few sane voices being drowned in belligerence and anger. The police did move to take some action, but has come under pressure. Those who find justification in the rape have been demonstrating for a CBI probe, as that will take the investigation out of the purview of the police that is currently under the state government, and of course the Chief Minister. The protests are demanding that the two cops and others arrested in connection with the case be released. From Kashmir the pressure is to solve the case, arrest all the guilty, trace the connections, and punish those responsible. The right wing groups are using this to further consolidate respective constituencies. And in the process bury even the last vestiges of secularism that Jammu and Kashmir had been known for. 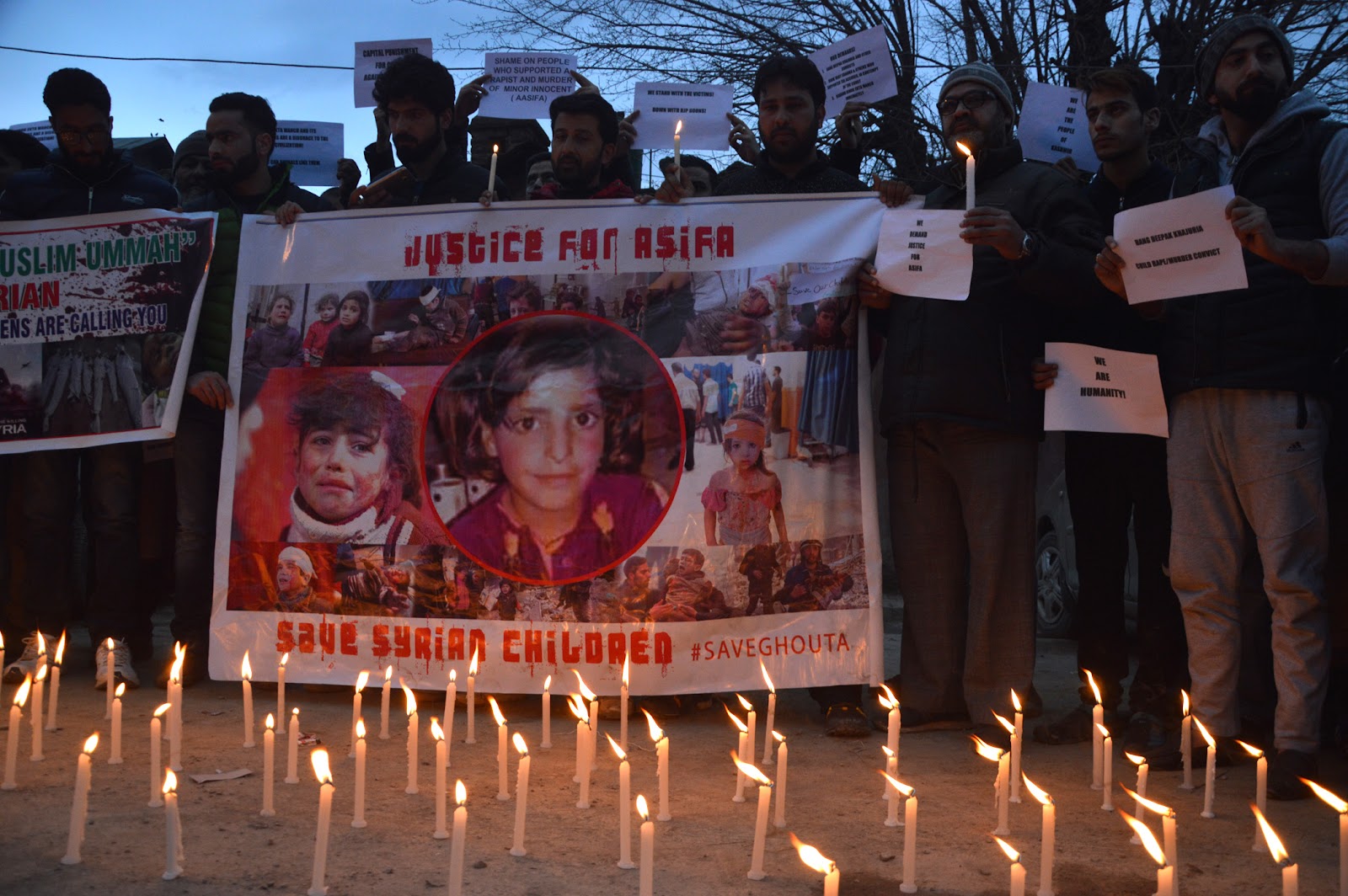