We or Our Nationhood Re-defined: Part Three

With the fall of the Berlin Wall and the decline of the Soviet Union, the USA was already the best armed, pre-eminent super power. But as Gorbachev sued for peace and disarmament, Ronald Reagan and the neocon lobby of the military industrial complex that controlled him, had other ideas.

American arms manufacturers export one third of the world’s weapons, often supplying to both sides in a conflict. If the collapse of the Soviet Union and the big bad commie reds had ushered decades of peace, it would surely have been bad for business. A new public enemy had to be invented. Islamic jihad stepped up just in time. 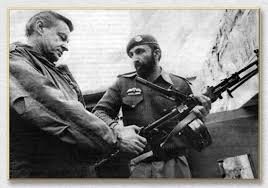 Overnight, friends became foes and vice versa. The Bin Ladens were partners with George Bush Sr. in an oil company in Texas. Osama Bin armed and abetted by the CIA became a champion jihadi in the war against the Soviets in Afghanistan.

After the defeat of the Soviets, Osama turned against America and soon graduated to the post of the elusive arch enemy, taking care to pop up on videotape a few days before Bush’s precarious re-elections, to guarantee him victory.

In oil rich countries that dared to nationalize, the fatwa was out. So fell Mossadegh in Iran in 1956, Saddam Hussain in Iraq in 2003, and Gaddafi in Libya in 2011. The coup in Venezuela to displace Hugo Chavez failed but in the Middle East the sectarian conflicts of Islamic jihadis could be used to weaken any nation state. Today Osama is dead but his Al Quaeda, morphed into ISIS, can still be used in various theatres to serve the interests of America, Saudi Arabia, Israel and their allies, as it was in Libya and now in Syria.

McCain flanked by Al Qaeda/ISIS and the Free Syrian Army

If occasionally they behead some white reporters, it only adds to the dread of the jihadi and serves to sell weapons, or buy sovereignty

In India it was image makeover time. For Modi to become PM or even, just to get a USA visa, the first requirement was a clean chit about the massacre in Gujarat. What he got instead was the absence of a clear guilty verdict. The Supreme Court’s amicus curae had found enough evidence to prosecute Modi but the Special Investigation Team did not agree. The SIT report confirmed that while Modi claimed to have been unaware of the Gulbarg Society massacre in Ahmedabad for as long as 5 hours after the atrocity, in a contrary finding, Modi was shown to have held meetings with police officers throughout the day in order to continuously monitor the violence. The SIT also confirmed that Modi’s Gujarat state government was guilty of destroying a huge amount of incriminating evidence, including completely destroying the records of police communications and government meetings during the riots. For a relieved corporate media, all this passed as “a clean chit”. 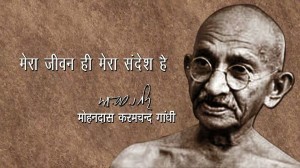 “My life is my message” M.K.Gandhi 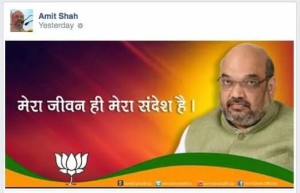 “My life is my message” Amit Shah (on his Facebook page)

The “clean chit” for Modi’s closest aide Amit Shah, is more astounding. He is accused of being a key player in the cold blooded false encounter killings of Sohrabuddin, Kauser Bi and Tulsi Prajapati. The case is still going on even though Amit Shah has been strangely allowed to skip court on a regular basis. Despite the grave charges against him Modi chose him to be BJP’s star campaign manager in Uttar Pradesh. Under Shah’s watch there was a communal riot in Muzzaffarnagar and polarized voters gave BJP a landslide victory. Shah was then elevated to BJP President and delivered further victories in Haryana and Maharashtra.

It is common to think that the main reason for the rout of the Congress was corruption. Corruption is really a non-issue, or rather, like black money, merely an issue with which to fool the public. There is so little to choose between the Congress and BJP alliances. For every A. Raja, Ashok Chavan, Ajit and Sharad Pawar in one, there is Yedurappa, Nitin Gadkari, Manohar Joshi and Shivraj Chauhan in the other. When Enron came to India they bribed the ruling Congress/NCP to get a foothold in Dabhol. The BJP/Shiv Sena then defeated the Congess/NCP by promising to scrap Enron, but just “renegotiated” to expand the Enron project. Today the Dabhol plant lies abandoned and rusting, having eaten up our millions.

Indeed the real high level corruption is not even called corruption because it involves changing the law or changing policy. Once this is done what should have been illegal is declared to be legal. Imagine the money that can be made from building a giant mega dam or better still, embarking on an even greater environmental disaster by interlinking rivers! The large loot that happens in this country is largely legal.

With so many ministers still facing charges the executive has revealed great anxiety to control the process by which judges are appointed. Following Modi’s election as Prime Minister, India got a new Attorney General in Mukul Rohatgi, a lawyer who defended and facilitated the original acquittals of Jagdish Tytler and Sajjan Kumar, ringleaders of the 1984 anti-Sikh pogroms although investigations of Tytler and Kumar were later reopened. More pertinently Rohatgi defended Modi’s Gujarat state government against prosecutions by victims of the 2002 riots.

In 2002 several of the captains of industry had reacted to the Gujarat riots in horror and had been openly critical of Chief minister Modi. They included people like the head of HDFC, Deepak Parekh and Adi Godrej. Today they are all part of the widespread pro-Modi business chorus.

In 2005 U.S. officials denied Mr. Modi a visa just as he was preparing to travel to New York to address Indian-Americans at a rally scheduled in Madison Square Garden. The State Department invoked a U.S. law passed in 1998 that makes foreign officials responsible for severe violations of religious, ineligible for visas.

The lobby to get Modi’s USA visa drew not so strange bedfellows. Congressman Joe Walsh of Illinois, one of the loudest Tea Party Republicans in Congress wrote a letter to Secretary of State Hillary Clinton asking that Modi be granted a visa. Walsh told local reporters that he felt comfortable with Modi as someone “kind of like a Tea Party free market guy in India, which I found very appealing.” 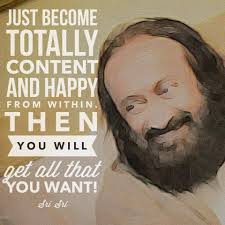 With Modi unable to go to the USA, his place was filled by Sri Sri Ravi Shankar, founder of the Art of Living Foundation. During a long interactive session with nearly 4,000 delegates of the Asian American Hotel Owners Convention Sri Sri was asked his views on Modi. He said “I don’t comment on individuals because individuals are just part of one wholeness.” 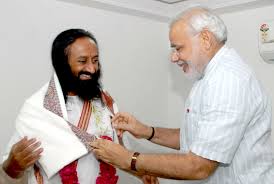 Sri Sri, the darling of the international corporate glitterati who has addressed the United Nations and the World Economic Forum in Davos, added “Everybody is what you call a nimitta — an instrument of the divine” “So branding someone good or bad or right or wrong and boycotting them is meaningless, is useless.”

Sri Sri then went on to talk about the unprecedented progress that was occurring in Gujarat under the Modi administration. He noted that more than 40,000 dams had been constructed in just one year. “The water level has come up in Gujarat so much. People are so happy”. No one seems to have told him that dams do not create water, they just take it away from those who cannot pay and give it to those who can.

“People are so happy” is now the theme song of our corporate controlled media. Those who refuse to sing it, or sing it out of tune occasionally are already getting the boot. I will not list the casualties.

In 2002 Celia Dugger of the New York Times had interviewed Modi a couple of months after the riots. “I asked [Modi] if he had any regrets about what had happened in his state in that period. : Women openly raped, hundreds of people killed. He told me his greatest regret was that he didn’t manage the media very well.”

It is a mistake he would never repeat. No media from TV to radio, print to internet is now left out of the ambit. Paid advertising has been taken to new heights. For weeks before the elections right up to polling day full blown Narendra Modi ads were on all the front pages. If the funds available seem inexhaustible so do the acolytes. Even with an X ray machine it is hard to spot a backbone.

And just in case some truths manage to rise to the surface, there is the triad of State censorship, extra state censorship and self censorship. Shubhradeep Chakravarty’s documentary that exposed how the riots in Muzzaffarnagar were engineered, is banned by the State. Following threats, Wendy Doniger’s book on Hinduism is voluntarily pulped by her publisher. And no mainstream paper deems it worthy to report that outside the Wankhede stadium even as an RSS man takes the Chief Minister’s oath in a lavish ceremony, 50 people are arrested for protesting the killing of 3 Dalits. Sunil Jadhav and his parents were brutally hacked to death because he allegedly had a relationship with an upper caste girl whose family is connected to the BJP, Shiv Sena, NCP and Congress. No one has been arrested. 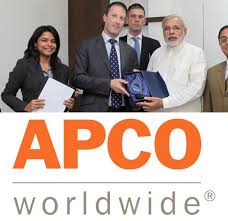 In 2009 Modi hired the American APCO company. Famous for doing public relations for dictatorships, APCO is a strong advocate of expanding armaments and the US military role in world affairs. Amongst its many notorious business clients is Monsanto. Its network and affiliates include conservative pro-Zionist lobbyists and consultancy groups including Henry Kissinger Associates, Heritage Foundation and the Jewish Policy Centre.

The makeover is remarkable. Modi wears different cultural hats (though his upbringing made him rebel when offered a Muslim one), garlands the statue of Dr. Ambedkar, talks to children on TV, picks up a broom to clean India, a feat that will remain purely cosmetic until the caste system itself is destroyed.

Modi even takes a photo op with the Chinese premier while spinning Gandhi’s charkha. This last photo is breathtaking.

Not only was Gandhi the man his mentors murdered, the spinning wheel was the symbol of Gandhi’s challenge not just to the corporate world but to the industrial revolution itself. It anticipated peak oil, global warming and the ravages of mad consumerism. I don’t suggest that we go back to the charkha literally, but the charkha clearly pointed to ideals of sustainability. The development model that Modi follows can only speed us along our way, over the edge.

One Big Family: Bollywood Nepo Culture and the Grand Samaj 21 hours ago

Kamala Harris Wows For More Reasons Than One!

Atmanirbhar in Defence, a Faux Pas