If what is happening currently in Kashmir is seen as anything short of a mass uprising then New Delhi is clearly deluding itself. The hard and angry actions by the Indian Army that has seen large scale human rights violations in the Valley has not quelled the protests but indeed intensified these. The hard state in India cannot work and it is a tragedy that so many lives are being lost---of Kashmiris and the Army---just because New Delhi does not have the ability to understand the people or the state.

The Valley has been sharply polarised into two narratives, where neither really meet. One of the security forces and the government, and the other of the people. The first is for Delhi and other parts of India, the second might remain confined to the Valley but is no less powerful in its impact. As it is able to penetrate the districts and the villages building an anger and a fury that spills out on the streets with alarming frequency.

Srinagar is no longer immune with the Army action in and outside the Jama Masjid the Friday before leading to the sequel two days ago, where hundreds of youth came out to directly confront the armed and weaponised security forces. Fear clearly was not a concern with the youth surrounding a CRPF vehicle, with armed personnel inside, in an almost “shoot me if you want” dare that has become the norm in Kashmir. A proverbial baring of the chest, with the teenager willing to be hit for freedom. And go down in history---even if briefly---as the martyr who from obscurity is now ensured of respect and a mass turn out for the burial. As a youth from Kashmir told this reporter, “I have nothing to lose, people will turn up at my funeral, my family will get respect.”

The CRPF claimed they had no choice but to try and escape the mob that had surrounded them. The youth insist that the vehicle chased and deliberately crushed one of them under its wheels, and it is only then that the anger exploded. Mirwaiz Umar Farooq wondered why the CRPF vehicle had pushed its way in, and not taken its cue from the local police, to leave the youth alone to vent their anger. Why the red rag?

Why indeed? Because now every moving man in uniform in Kashmir has become a red rag. The cop does not inspire trust, but his family remains worried about his safety. He lives in the village and is no longer respected. As local politicians of the National Conference and PDP are the first to admit, “we live in fear now, no one listens to us, we are completely irrelevant.” Chief Minister Mehbooba Mufti has been silent through it all, more so as this violence is happening in the month of Ramzan that usually is observed by the people with relative peace and silence. However, the refusal of the Army to cease operations as it were remains the provocation and as a Kashmiri scholar told The Citizen, “it is clear to us that there is no halt in operations as the firing at the mosque in Srinagar demonstrated so clearly.” This was hushed up by the national media but at least 70 persons were reported injured in the clash.

Senior officers of the Indian Army who have served in Kashmir are aghast at the continuing policy of violence. As one of them pointed out, this approach by the state will turn the entire population into militants, and for every one killed, there will be scores of replacements.” The Army that has been trained to look at the Kashmiri as the ‘enemy’ is creating terror in the villages of Kashmir, with mid night raids, interrogation of youth, arrests and of course the old 1990’s practice of blowing up entire homes in ‘encounters.’

These actions are leading to a desperation and an anger that is unequalled in recent times. A certain romanticisation of the crisis is making the youth pick up the stone, even as many cross over into the world of hardened militancy. This time around they are not crossing the borders into Pakistan, but are being trained locally, with that basic training leading the militants at least straight into encounters and death. The Professor who was killed in an encounter almost days after having joined the militants as it were, disappeared without word, struck by the possibility of fighting for his land. He was not of extreme ideology, and had shown little signs of radicalism in the conventional sense of the word.

The environment is such that those who are still talking of peace, feel the pressure. And as one of them said, almost a traitor now as “there is nothing from the government in Jammu and Kashmir or Delhi to even allow us to hang on to this fig leaf.” The ceasefire announced for Ramzan was seen by many in the Valley as applicable to internal hostilities as well (still not clear what the two governments really meant) but the ‘bloody Friday’ in Srinagar has strengthened the sceptics, and further isolated those seeking dialogue.

Officers of the Indian Army who have served in Kashmir in the past are clear that the current approach is going to one, lead to a highly unstable state in what is a strategic zone; and two, will not restore peace but again shift the image of the Indian army from a professional to a brutal force. As a senior officer said, of course on condition of anonymity like the rest, “the people might be fearful but the youth are something else. They have no sense of fear, no sense of what could possibly happen. If our forces open fire, as clearly the confrontation is leading to, we will lose Kashmir altogether.”

The situation has changed dramatically, with the goal posts being shifted with alarming rapidity by the Indian state that remains unwilling to move away from the militaristic approach to dialogue and peace. As a senior politician said, “even now if there are talks the pressure on us will be immense with every comma becoming the point of intense debate. It is not going to be a dialogue of the past where we had a relatively free hand, this time we will not be allowed negotiating space.” But as he pointed out, there is still a window today, “tomorrow, and I am saying this with a sense of responsibility, will be too late. As it is we do not exist for the people at large with a death or arrest now in almost every home.”

Gogoi, the Army officer who had tied a Kashmiri to his jeep as a human shield, violated all norms and yet got the commendation certificate from the Indian Army and a public pat on the back from the BJP government. That he was subsequently caught in a hotel with a woman whose family he had reportedly terrorised with midnight raids, did become an issue on the social media but for the stone pelting youth a matter of inconsequence, Explaining this a source said that this is because his first act of tying up the youth had damned him in the eyes of the Kashmiri. His subsequent action was expected, and part of the trajectory of the Indian Army that even in its previous avatar has not spared the Kashmiri woman. For instance the Kunan Poshpora rape for which justice is still awaited, is caught between the two narratives. One of the women who said they were raped, and the other of the Army that insisted that this was fake.

One is a reality for Kashmir, the other wrapped and sold to Delhi. One becomes the instrument of human rights violations of the worst kind, the other a ploy for polarising and winning parliamentary elections. 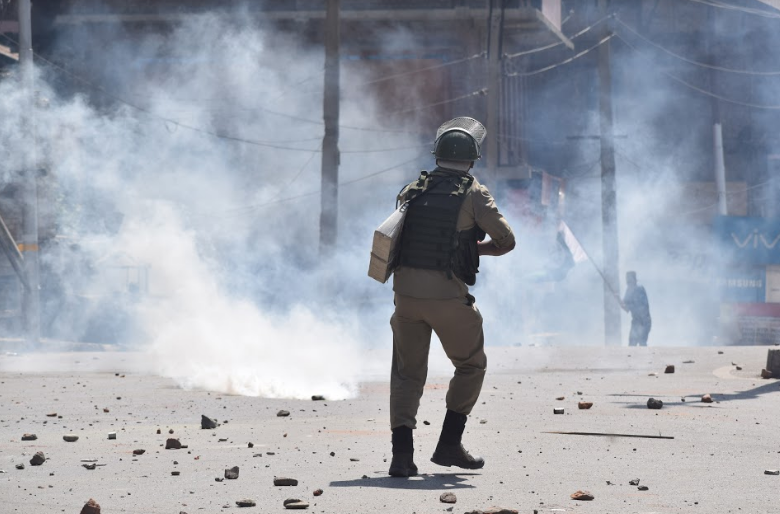 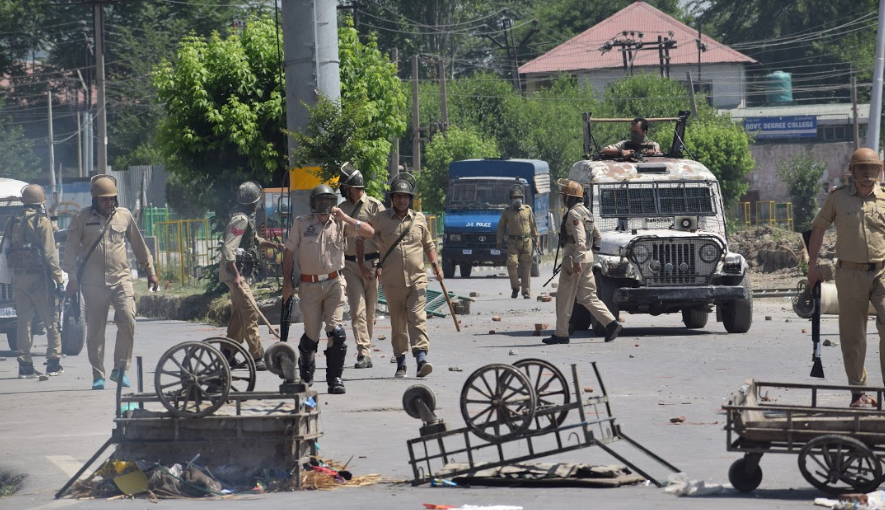 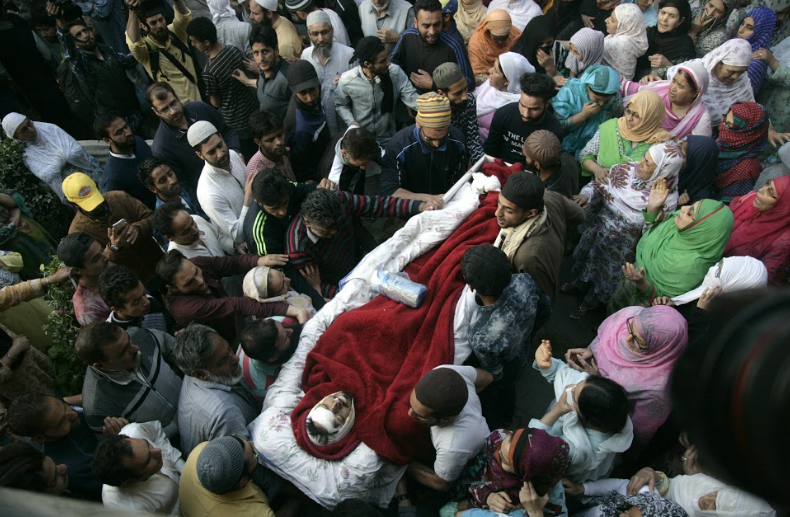 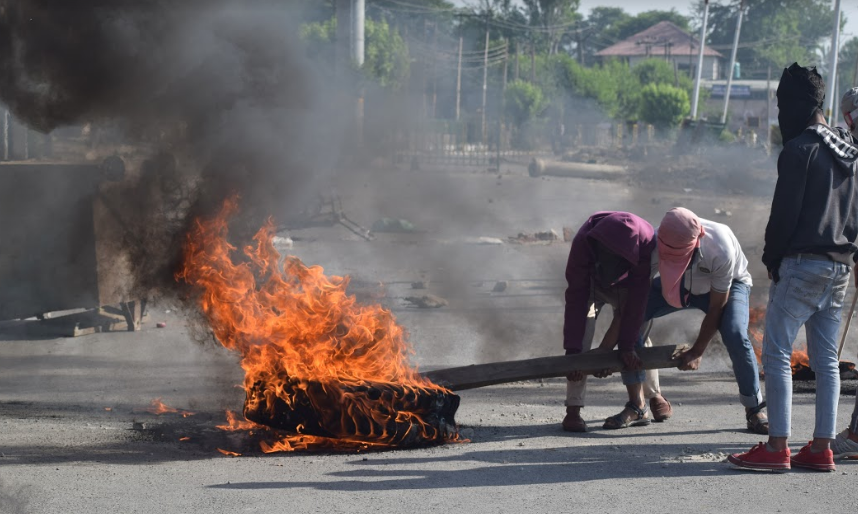 (Next: The New Militant)