Who Killed Shujaat Bukhari? A Murder Designed to Push Kashmir Over the Edge

This is no ordinary killing

This is no ordinary killing. And these platitudes of “how terrible” pouring in from top politicians in Delhi and Srinagar disgust me frankly. As these are so meaningless and almost as if once the statement is issued, their responsibility is over.

It is not an ordinary killing as Rising Kashmir Editor Shujaat Bukhari was not an ordinary man. A friend, a voice of reason and hope, a brilliant reporter, a great editor who moved out of the Hindu to start his own newspaper and made it a resounding success, a voice with resonance in both India and Pakistan, a popular man, intelligent, bright and never allowing the vagaries of the time to impact on his commitment to peace. Yes that was Shujaat, a loving husband, a doting father and a man who never stopped looking on the future for Kashmir with optimism.

For many of us in Delhi who worked with him, sat with him, often drove him crazy with our demands, his death is such a loss, it has created a void that cannot be filled. Simply because there is no second Shujaat.

So who killed him? The vague photographs carried above have been reportedly released by the Jammu and Kashmir police as those of the assailants. They could be anyone, there is nothing there to show they are from within Kashmir, or outside, or across the border. Three goons on a two wheeler, drawing courage from their numbers, reprehensible cowards and clearly acting under someone else’s control.

For the murder would have taken planning, and training. Stalking as in the case of Gauri Lankesh, finding out the movements, lying in wait, and having the motivation to go in and kill not just him but his security guards. And of course being supplied with the weapons that killed them so brutally, and within minutes. And that too in a state and a city where the ordinary Kashmiri cannot move without being frisked and humiliated at checkpoints, with soldiers and paramilitary personnel at every corner. Clearly more for photo-ops and little else, with not even the intelligence agencies (of both countries) getting a whiff of the planned crime.

Amazing. And then these people, the Chief Minister of Jammu and Kashmir and the Union Home Minister come out with the usual, how terrible, what a loss, with of course some tears thrown in for good effect. This is not the time for tears Ms Mufti, use your authority and the powerful state under your command to track down these killers, and unearth the conspiracy. As conspiracy it certainly is regardless of those who planned and executed Shujaat Bukhari’s murder.

It is not a simple murder. Why? Because Shujaat Bukhari was not a simple man. He had irritated all sides, like an independent, fearless journalist does. The Kashmiri militants did not like his commitment to Kashmiriyat. Or his links to us and others in New Delhi. He often went to Pakistan---was one of the main invitees--- but have myself heard him call a spade a spade as he told the Pakistanis what their interference in Kashmir was doing to the people. How ruinous it was, how crippling for the innocent Kashmiri.

He tried hard to bridge the gaps, and always dreamt of organising a Srinagar-Delhi-Islamabad dialogue. Starting as he did try to, between Srinagar and Islamabad that was of course aborted because of bad relations between the two countries; and Srinagar-Delhi that he never gave up on. He was in Delhi at a moments notice when friends organised meetings with right wing think tanks close to the BJP, and never hesitated to be in the delegations calling on BJP leaders in government to persuade them to begin a dialogue.

Soon Shujaat realised these efforts were in vain, and he became critical of the establishment that would not start a dialogue with its own people. This criticism was vocal, but never personal. With substance and thought. He was not a journalist given to defamation and cheap criticism, but always spoke with a sense of independence and impartiality that was so refreshing for all dealing with Kashmir. Shujaat was the man to speak with a clear perspective, without frills, and saying it straight as it was.

Someone did not like him. Someone with the clout to organise the murder, someone who did not want a linchpin like him in Kashmir. A man with an international reach, and a commitment that defied pressure. A man who people listened to, and who was not easily controllable by any side. He had been targeted by the militants earlier for precisely this and moved with security since.

The government lost no time in insisting that the militants had killed him. But how do you know that? Give us the evidence. Find those men whose CCTV shots are being circulated, arrest them, get the story and be bold enough to release it. This end has to be clinched and not lost in voices of deception and apathy. Otherwise this death will be the turning point that clearly the perpetrators of the violence have intended. It will not scare the people, it will turn the last vestiges of pro-dialogue sentiment in Kashmir into hard opposition. And ensure that the voices of reason, of sanity are silenced completely leaving the state to all those perpetrating violence, physical and verbal.

And the door that Shujaat Bukhari tried so hard to keep open for the sake of the future he believed in, will be slammed shut with consequences that the United Nations Human Rights report---the first ever on Jammu and Kashmir---has so clearly warned of. 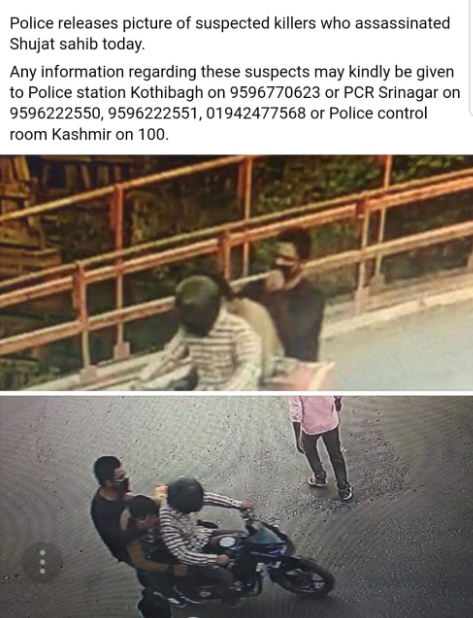