India Signs Communications Compatibility and Security Agreement with US

NEW DELHI: (Editors Note: Strategic expert Bharat Karnad had written this article on the eve of the 2.2 talks between the US and India saying that if the Modi government signed the COMCASA agreement it would amount to full capitulation. India has signed the agreement and the article below spells out exactly what it is about, and why it will ensure as Karnad says that the “Damocles sword of US sanctions will herafter hang over India and compel New Delhi to toe Washington’s line on everything--Russia, Iran, non-proliferation, removal of tariffs on imports from the US..” Significantly, US President Donal Trump, immediately after the pact was signed, has spoken of withdrawing subsidies to countries like China and India. If they are developing countries so are we, he has just said).

The 2+2 talks between the Indian and United States foreign and defence ministers — Sushma Swaraj and Nirmala Sitharaman, and Mike Pompeo and James Mattis respectively — scheduled for September 6, will end in India’s capitulation if the Bharatiya Janata Party (BJP)-led government of Narendra Modi signs the Communications Compatibility and Security Agreement (COMCASA).

This accord will enable the US to comprehensively penetrate — horizontally and vertically — India’s most secret communications and command and control networks, including the Strategic Forces Command overseeing nuclear security. Official sources have said that the Modi dispensation is satisfied by Washington’s assurances that no information, classified or otherwise, routinely picked up by the US agencies monitoring and listening in on the Indian national security communications traffic will be divulged to third parties. Scout’s honour!

The level of gullibility displayed by the Indian government’s trusting Washington to do the right thing is astonishing, considering the US record is one of consistently selling India short. For instance, the intelligence picked up by US agencies in 2008 that the Pakistan Army’s Inter-Services intelligence-controlled terrorist groups were planning a seaborne attack on Mumbai was not conveyed to Delhi and the 26/11 mayhem ensued. This mind you when Delhi had made common cause against terrorism with Washington in the wake of the 9/11 strike on New York.

The COMCASA, following up on the Logistics Exchange Memorandum of Agreement (LEMOA) that will allow US troops and military assets to stage military operations in the extended Indian Ocean region out of Indian air, naval and army bases will formally mark the loss of India’s strategic autonomy. What may derail this accord, at least temporarily, and discomfit immediate US plans, is something else altogether — India’s buy of the S-400 air defence system potentially drawing economic sanctions under the recently passed US law, Countering America’s Adversaries Through Sanctions Act (CAATSA).

The prickliness of the issues involved has led to an impasse. A former MEA official, Rakesh Sood, in superficially outlining in an op-ed piece the well-known problems with CAATSA, offers no solution other than suggesting unhelpfully that the two sides think “creatively”.

Ashley Tellis of Carnegie, who pulls weight in Washington and, incidentally, with Modi, doesn’t doubt that the S-400 system is the best of its kind in the world and that the combination of the Patriot surface-to-air missiles and the Theatre High-Altitude Air Defence system the Americans have offered is not a match. Even so, he conceives of three options for Delhi.

The Modi government, he says, can “scuttle” the S-400 deal and buy into the lesser US system, or string Russia along and “defer payment” to avoid precipitating sanctions, or “Make a deal with Trump” — the option Tellis favours, by speedily agreeing to several high-value transactions for US hardware — the F-16 combat aircraft for the Indian Air Force and the F-18 carrier aircraft for the Indian Navy, that are “lucrative enough to the United States and remarkable in its potential geostrategic impact.” India’s purchase of these 1970s vintage aircraft will certainly be lucrative for America alright but what “remarkable …geostrategic impact” they will have, is a mystery!

Tellis’ solutions are basically premised on Delhi’s malleability. Except this last is an attribute inherent in Modi’s US policy animated by his conviction that accommodating the US will fetch dividends. Alas, the past and current developments reveal America as eminently untrustworthy. The fact is the waiver of sanctions on the S-400 means nothing, because it is one-off.

The Damocles’ sword of sanctions will hereafter hang over India and compel New Delhi to toe the US line on everything (Russia, Iran, non-proliferation, removal of tariffs on imports from the US, etc.). The irony is that the supposedly “nationalist” BJP government has reduced India to this state.

(Bharat Karnad is a well known defence and strategic expert who writes a regular blog.) 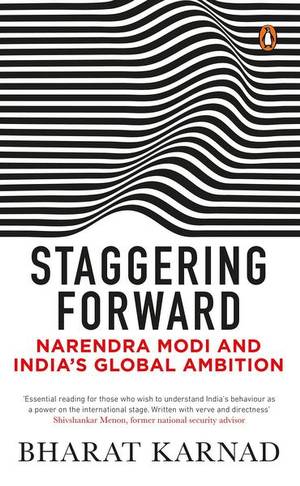 (His new book is in the market)

Bharat Karnad is a Research Professor in National Security Studies at the Centre for Policy Research, New Delhi.He is the author of India's Nuclear Policy.