The appalling status of women, not only Muslim but various other nationals - Philippines, Sri Lanka, Bangladesh and India - who toil as domestic workers in Saudi Arabia is slowly being known outside the royal kingdom.

The occasional revolting, factual stories of returnees cry out for justice in fury, if not in utter shame. Yet, what happens within Saudi households to Saudi women is very rarely reported in the media. Why not?

Saudi Arabia has a system, not a written law, which does not permit women to travel alone within or outside country. It is the “guardianship system” under which a female must have a “wali,” (male custodian, protector, helper) while travelling. A custodian’s permission is needed “to obtain a passport, divorce, remarry, and sign contracts.”

No Saudi citizen - be he a bureaucrat, a businessman, a lawyer, or an entrepreneur - dare question this system lest the wrath of the mighty mutaween (religious police), tasked to “promote virtue and prevent vice,” come down like a veritable sledgehammer on a fly.

Recent news reports, though, state that the Crown Prince Mohammed bin Salman (generally known as MBS) introduced a decree in 2016 whereby women and men are permitted to see sporting events together, yet in separate seating areas.

In short, female independence plainly does not exist.

Those domestic workers who report about brutal violence or sexual abuse in a Saudi household cannot complain to the police as they necessarily have to be accompanied by a Saudi wali to the police station, let alone the fact that the domestic workers’ passport is taken away by the Saudi householder, who employs her, and she does not speak Arabic. As such, rare, if any, are news reports of domestic violence.

Further, no Saudi journalist dare question this system as that is utterly disloyal and punishable by lashes in public. The latter may be the least of other severe penalties. Any foreign government which tempts its fate in speaking out for women’s rights in the royal kingdom does so at a colossal cost.

“Very alarmed to learn that Samar Badawi, Raif Badawi’s sister, has been imprisoned in Saudi Arabia. Canada stands together with the Badawi family in this difficult time, and we continue to strongly call for the release of both Raif and Samar Badawi.”

Within four days, Canada was asked to recall its Ambasador Dennis Horak “within 24 hours.” Saudi Arabia in turn called its ambassador in Ottawa back home “for consultations,” as reported in The Independent, August 6.

“Saudi Arabian Airlines announced it would suspend all flights to and from Toronto as of Aug. 13,” and “more than 15,000 Saudis [who] study in Canada on scholarships, grants or in trainee programs funded by Riyadh” were told to return home, wrote Steven Chase, The Globe and Mail, August 8.

Canada’s exports which “totaled over US$ 500 million in 2017” were in jeopardy stated The Conversation, August 14. Canada has a trade deficit with Saudi Arabia.

This essential context about the status of Saudi women and the debilitating stranglehold of savage patriarchy forms the astonishing, recent narrative of Rahaf Mohammed al-Qunun, an 18-year-old Saudi woman, who escaped from the manacles of her allegedly abusive family while visiting Kuwait.

Kuwaiti law does not require a female to have permission from a male to board a flight or any “wali” in tow.

This crucial fact permitted al-Qunun to board a flight for Australia via Bangkok on January 6. In Bangkok, she barricaded herself in a hotel at Suvarnabhumi airport much to consternation of menacing Thai immigration officials who were perplexed, denied her entry, and threatened to deport her back to Saudi Arabia. Thailand is not a signatory to the 1951 UN Refugee Convention, of which the United Nations High Commission for Refugees (UNHCR)) is the guardian,and is known to repatriate those who demand such status.This was unknown to al-Qunun. 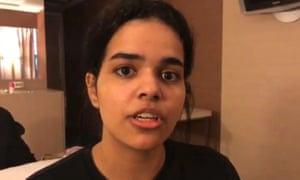 “Rahaf Mohammed al-Qunun says she was stopped by Saudi and Kuwaiti officials while in transit at Suvarnabhumi airport in Bangkok.” Photograph: AFP/Getty Images

Al-Qunun refused to get out from her hotel room and pleaded for asylum, initially from Thailand. The last was a wrong move.

What was the burden of al-Qunun’s plea? She stated that she had “renounced Islam.” This is apostasy and punishable by death under Saudi law. Further, she alleged “physical and psychological abuse” by her family members. Al-Qunun was quoted in The Guardian, January 7, saying:

This shocking revelation gives a rare glimpse of what happens in an oppressive Saudi household to an educated and freedom-loving Saudi woman. Yet, it did not cut any mustard with the Thai immigration authorities who were undoubtedly under intense political pressure both from the Saudi government and the influential al-Qunun family to return her to Saudi Arabia. The teen’s father, whose name is never reported in the intense coverage of this story, is the governor of Al-Sulaimi town in the north-western Ha-il region of Saudi Arabia.

After all, al-Qunun was in transit to Australia, had no visa for Thailand, and no money to buy a ticket to fly back home. To compound matters, a Saudi official took away her passport and travel documents, though not her vital telephone which would play a life-and-death role. Thailand’s immigration chief, Maj. Gen. Surachate Hakparn, was batting on a solid wicket. Al-Qunun’s situation was not only desperate, but hopeless.

Paradoxically, it was hope itself that al-Qunun did not ever give up and to which she clung with all her teen might. The situation did not deter her strong resolution. She refused to budge from her hotel room or to bring down the barricade. 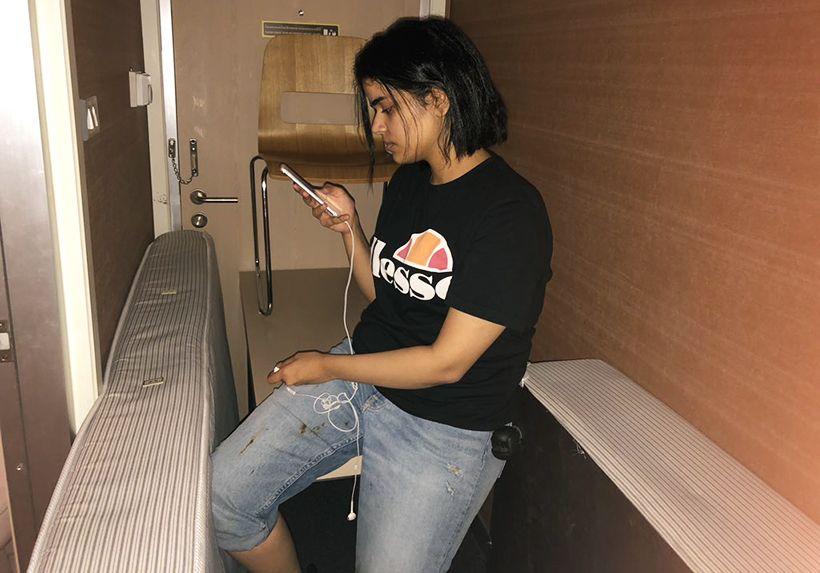 The terrified teenager courageously continued relentlessly and launched a very astute social media campaign on Twitter describing her plight which slowly unfolded. Rahaf changed her strategy in the face of Thailand’s known policy on refugees. She now called for help from United Nations High Commission for Refugees (UNHCR) in Bangkok, demanded to see a UNHCR representative and personally make her plea for refugee status, under the 1961 Protocol Relating to the Status of Refugees.

What was she fleeing from?

Patriarchy, sexual harassment, denial of basic human rights, and under the General Assembly Declaration on the Elimination of Violence against Women (1993). Granting refugee status is never easy and takes time which was at a premium for al-Qunun.

Who knew what horrors the Saudi embassy in Bangkok would quickly spring to repatriate al-Qunun home and make her lesson for all oppressed Saudi women. The barbaric murder, in early October 2018, of the Saudi journalist Jamal Khashoggi, who walked into the Saudi consulate in Istanbul to obtain marriage documents must have been looming large on the minds of all officials - Thai, UNHCR, and other diplomats in Bangkok, especially German, Swiss, and Australian - who were keenly following rapidly unfolding events and reporting back to their governments.

It was perhaps al-Qunun’s plea for refugee status to the UNHCR which was efficacious, though it was too early to declare. Thai authorities were not forthcoming, so al-Qunun appealed to Australia which all throughout made politically correct statements about how generous it is in giving a home to refugees. The facts prove to the contrary and Australia was dithering and continued to do so.

Was there Saudi diplomatic and political pressure involved behind the scenes? Would it suffer Saudi wrath similar to Canada?

At the same time, al-Qunun garnered “half a million tweets under the ‘#SaveRahaf’ hashtag which gave her an international platform and drew her cause to the world’s attention. This was the tipping point.

It effected the hostile attitude of Thai immigration officials and slowly morphed. They now changed their story to claim that “Thailand was a land of smiles,” and that it would not deport al-Qunun.

On January 10, the UNHCR granted al-Qunun refugee status and asked for access to her by an UNHCR official. This was finally granted. Yet, the question still remained: Which country would accept the terrified teenager? It was clear that behind the scenes Saudi puissance was proving formidable, like Godzilla (1954) also known as the King of Monsters. 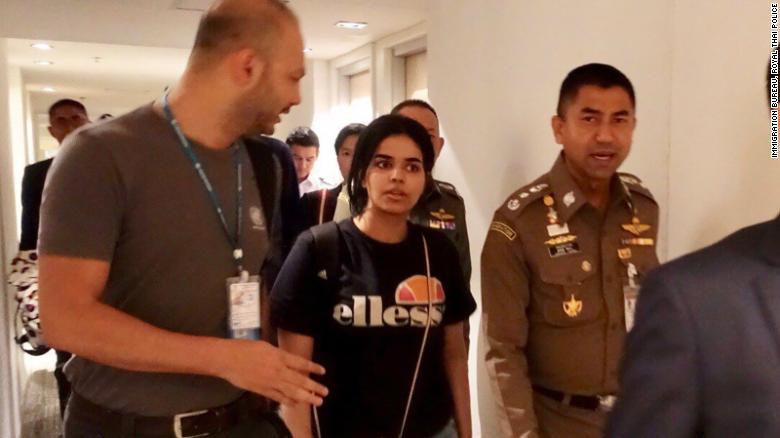 Finally, Canada stepped up to the plate. Prime Minister Justin Trudeau announced at a press conference in Regina, on Friday, January 11, that Canada at the request of the UNHCR would accept al-Qunun as a refugee. “That is something that we are pleased to do because Canada is a country that understands how important it is to stand up for human rights, to stand up for women’s rights around the world,” Trudeau said to the National Post, January11.

The world rejoices and salutes the awe-inspiring courage and resourcefulness of Rahaf al-Qunun for taking Saudi patriarchy head on and coming out a winner. "We wish they had confiscated her phone instead of her passport,” [italics mine], the chilling statement of the Saudi charge d'affaires Abdullah al-Shuaibi, in Bangkok, communicated through an interpreter and reported by Helen Regan, CNN, on January 10, are deplorably disquieting.

They portend that the way ahead for oppressed and sexually harassed Saudi women and domestic workers in the royal kingdom is firnly paved, formidable and frightening. Even Hercules would think twice, but al-Qunun has proven otherwise!