In the mid-seventies, when I came to Delhi University from a small village in Haryana, the deployment of police or private security guards either in the college or university campus was unheard of.

There used to be university watchmen at the gate of the college, hostel and faculty, who were generally befriended by the students. In the entire north campus, only one man from intelligence used to be seen from time to time. That sociable police officer was often recognised by the students who took part in student politics, debate, literary-cultural activities.

Of course back then there would be protests, elections to student and teacher organisations, big fairs and festivals, a wave of new ‘bad elements’ would come year after year, there was a race among certain colleges to be on top as a ‘terror’ college, there were many kinds of fights in between, even knives were used… but generally there was no need to call the police before or after the incidents.

What is meant is that this large university, whose symbol is the elephant, would run only on its own arrangement, despite the fact that the campus is an open campus easily accessible from all directions.

The situation was more or less the same in all central and state universities and colleges. Obviously, this was possible due to a mutual understanding and sense of responsibility among the teaching and non-teaching staff, students, and of course, the vice-chancellors and the principals.

But as the influence or pressure of neo-liberalism increased in politics, society, religion and culture through the country’s economy, the education system could not remain untouched by it.

Under the earlier administrative setup all, employees from peons, chowkidars, daftaris, gardeners, scavengers, butlers, lab assistants, library assistants… to clerks were permanent employees of the university. There was new recruitment only after someone retired. But that practice was stopped 20-25 years ago.

Instead of making permanent recruitments, appointment on a contractual basis became the trend. One contractual employee is made to perform the work of three-four employees and for more than the prescribed hours of duty. The teachers also could not escape this trend.

About 5,000 are ad-hocs or guests in Delhi University at present. Such vice-chancellors and principals are appointed by governments who blindly implement the policies of privatisation in governmental educational institutions.

Meanwhile, the character of student politics also changed. The patent on ‘goondaism’ in student politics did not remain with the Congress-affiliated National Students’ Union of India alone. It was brought to the Akhil Bharatiya Vidyarthi Parishad, the student wing of the Rashtriya Swayamsewak Sangh, and further to the student fronts of the satraps who came to power in the states due to the politics of social justice, and to the Communist student organisations in West Bengal and Kerala.

Simplicity, healthy debate, common student interest did not remain the concerns of student politics, which has become an endless series of confrontation with opponents invoking their leaders, icons, slogans, parties, ideologies etc. Students from marginalised societies who have joined the arena of higher education due to constitutional provisions have envisaged their own mobilisation in student politics.

So, this clash among student groupings is multi-cornered, while the RSS and the Communist parties operate with the strategy of showing it to be between themselves. This phenomenon of student politics is not one-sided or single-folded. The student politics of the neoliberal era is a shadow of the corporate politics prevalent in the country in present times. 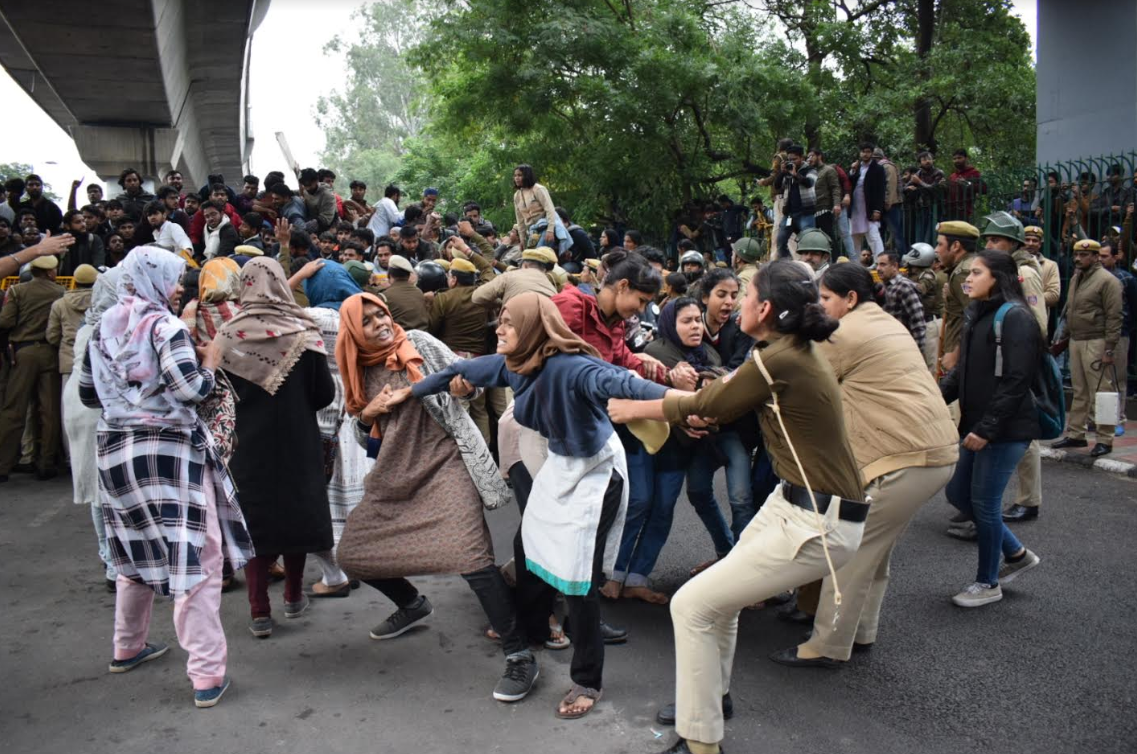 Wealthy students get relief through admission and campus postings in private educational institutions. Most candidates who seek admission and jobs in public sector colleges and universities live in constant uncertainty. Government education is no longer as cheap or affordable as it used to be.

The pressure of an all-round consumerist culture also plays its role. They are constantly told by the political elites that the country is progressing very fast. When they try to find their place in that progress, disappointment is often felt.

Then various kinds of debates, discourses and NGOs are waved in front of them. They join them and experience the significance of their being for some time. There seems to be no solution coming out of this ‘touch revolution’, and their age goes on increasing. They live in a state of constant restlessness.

The way the entire education system is being uprooted from the axis of the Constitution without proper thought or planning, to be mounted on the pivot of privatisation of a clumsy kind, there is no dearth of protest issues in front of them. Events at the national or international level also agitate student groups. So, there is one or other protest every day on the campuses.

The student leaders who make student-politics a means of making a place for themselves in party politics, or other vested interests, take advantage of this situation. Big or small leaders, the media, civil society activists are ever ready to play their roles.

There is a need to look into this background while discussing private security arrangements and the presence and role of the police or paramilitary forces on campuses.

If there is restlessness and uncertainty in the minds of students then there will be protests. In the absence of trust towards students and teachers, university officials will continue to resort to the police again and again.

‘The police answers to those in power’ – this practice has been going on in India since colonial times. The police will defend the student organisations and leaders which are affiliated to the government in power, and will suppress their opponents. It will also defend the anti-social and violent elements belonging to or hired by the ruling party. And when the top leaders of the country do politics by making a communal divide its basis, then the police will also practise communal behaviour.

In the last few decades the presence of police on campuses and incidents of interference have increased very rapidly. Rather, vice-chancellors’ demand for permanent deployment of paramilitary forces on campus has gained momentum.

Last year, on the demand of the vice-chancellor of Vishva-Bharati (Shanti Niketan), the central government decided to permanently deploy the Central Industrial Security Force on the campus. This is the first time that this has happened in the university system.

And in November last year, the vice-chancellor of the Jawaharlal Nehru University called the Central Reserve Police Force onto the campus to deal with the students’ agitation.

The increasing dependence on police force by university officials even in minor disputes is converting campuses into cantonments. The day is not far when the police will enter university premises even without their orders. This happened recently in Jamia Millia Islamia.

In the absence of police, a large number of private guards (often retired army employees) and barriers give the campus a look of a cantonment. The south campus of Delhi University is small and compact. It has only six small buildings including a library. There is a police checkpoint at the main gate. Despite this, there is a plethora of private guards. Someone coming to meet a teacher cannot do so easily, and not at all if they are from the media.

In fact, all this is done to enslave the young minds so they can subordinate themselves to the system. It is the responsibility of university officials, teachers, students and administrative staff not to allow a campus to be transformed into a cantonment. Parents and guardians can also play an important role in this.

They should insist that the primary responsibility of the university authorities is to create a safe, fear-free and creative environment on campus, and not to obey this or that government’s order. 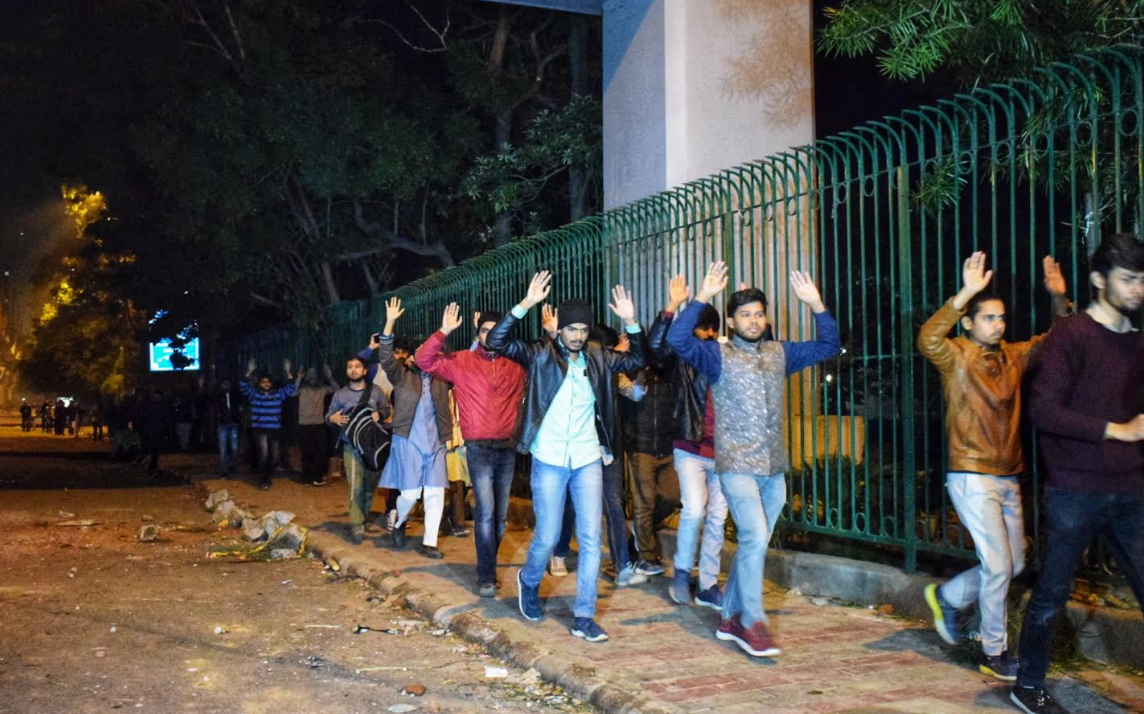 Prem Singh is a teacher of Hindi at Delhi University