‘De-Radicalisation’ Will Not Work in Kashmir Without Democracy

Chief of Defence Staff(CDS) General Bipin Rawat’s casual reference on the need for “De-radicalisation camps” in Kashmir has only resulted in giving a bad name to India in international media without any benefit to counter-terrorism (CT) efforts.

The New York Times (17 Jan 2020) said: “ India’s top military commander has created shock waves by suggesting that Kashmiris could be shipped off to ‘de-radicalization camps,’ which rights activists consider an alarming echo of what China has done to many of its Muslim citizens”.

Others were reminded of the Guantanamo camp for 9/11 terrorists or Camp Bucca where US forces had detained suspected Iraqi extremists which finally turned out to be the incubator for the dreaded Islamic State. I am sure the general had no such intentions. Yet I feel that he should have tackled the subject with greater care taking into account the experience all over the world on such counselling programme which had not followed a typecast model.

Right now more than 15 countries follow different types of counselling and rehabilitation, called “counter-narratives” to prevent radicalisation. The word “De-radicalization” is used only for those already radicalized or are in prison. Also many are under a wrong impression that “De-radicalisation “started only after 9/11 to check Islamic extremism. Very few are aware that European countries like Norway had started this experiment to check ultra Right Wing extremism under Neo-Nazi influence.

In Norway a small research group worked on this problem between 1991 and 2005 along with government agencies like Ministry of Justice, Social Welfare and police to identify and wean away youths from Neo-Nazi thinking by using “Exit” initiative through dialogue, guidance and parent network groups. These methods were copied by other Scandinavian countries.

Unfortunately this process was halted in Norway in 2005 when their resources were diverted to Islamic extremism. On 22 July 2011 the country was jolted by Anders Behring Breivik, a 32 year old Neo-Nazi who killed 77 people and injured 319, mostly immigrants, through car bomb and shooting in Oslo and Utoya Island. Investigation revealed that Anders, a Pagan religion believer, who had suffered from mental problems, could have been identified under the “Exit” initiative, had that programme been alive.

The Indonesian experience of resisting religious extremism is much older. Islamic insurgency there dates back to the 1930s. Darul Islam, the original rebel group was found even during pre-Independence days for being responsible for several incidents. They and later outfits like Al Jamaah Al Islamiyyah were responsible for armed rebellion in the 1950s, attempted assassination of President Sukarno, bombing of Borobudur Temple and hijacking of Garuda airline in 1981. In 2010 the Government established National Counter Terrorism Agency (BNPT) which had the responsibility of countering radical extremist propaganda including “De-Radicalization”.

Yet they could not prevent hundreds of their nationals going to Syria to join the Islamic State from 2014. Detachment 88 of their National Police, which was praised for weaning away 200 militants by 2008 also failed to monitor the mental mood of returning Jehadis from Islamic State areas. As a result three churches in Surabaya were attacked by suicide bombers on 13-14 May 2018 killing 28 which included 13 attackers. The second bombing was a great tragedy as the suicide woman bomber had strapped explosive devices on her 2 minor children who all perished in the ghastly incident.

In September 2013 the Soufan Group, with the participation of Qatar International Academy for Security Studies (QIASS) released their findings on different “Counter-Narratives” programme after a global field study lasting over a year. This was before the Islamic State had made its appearance. The study found that terrorist leaders prey upon vulnerable sections on local grievances, exploiting their feelings of anger, humiliation or resentment. They then “incorporate conspiratorial messages” blaming the targets (government or others) coupled with “distorted religious edicts” and also achieve success “by providing both answers and a sense of purpose to vulnerable individuals”. The Internet and social media provided avenues for recruiting new members and disseminating terrorists’ messages”.

Their key findings and recommendations were: (1) De-radicalization(Counter-narrative) methods have to vary from country to country and even within the country since people join the groups for different reasons ;(2) Both traditional and social media have contributed unwittingly to the spread of “Extremist narratives ”; (3) Education and good governance can check the spread of extremist narratives; (4) during de-radicalization programme, care has to be taken “ to refrain from using terms such as ‘radical’ or ‘jihad’ as the words may traditionally have positive connotations”. Attempts should be made to find “what best resonates with the targeted audience”. As an example in Northern Ireland, expressions like “Former terrorists” and “Former extremists” were replaced with “former combatants” or “ex-prisoners”

One common feature in all these “counter-narrative” programmes is the public support including that of the individual and his family. Is that now possible in Kashmir where we have totally alienated local people by the August 5, 2019 crackdown? I had mentioned in a column on August 4, 2017 that a dangerous element in any CT Ops is the public support out of resentment against the government which is the classic feature of “Insurgency”. It was a matter of concern that the local people used to turn up in large numbers to attack the security forces during or after counter-terrorist operations.

That type of public support to the militants was never seen in any terrorism affected countries including Afghanistan, Iraq or Syria. It is seen only in Israel or its borders where practically every Palestinian hates the Israeli occupation. Unfortunately the public support to militants in the Valley was wrongly read by the present government as total support to Pakistan.

The Concerned Citizens’ Group led by Shri Yashwant Sinha, a senior minister in the Vajpayee government, has been reporting since 2016 about the sense “of despair and desperation in Kashmir” and their resentment at the present government’s attitude in describing all protesters as “puppets of Pakistan”. In this background, would our efforts in seeking public cooperation to start a “De-radicalisation” or “counter-narratives” programme succeed to end radicalization in Kashmir? 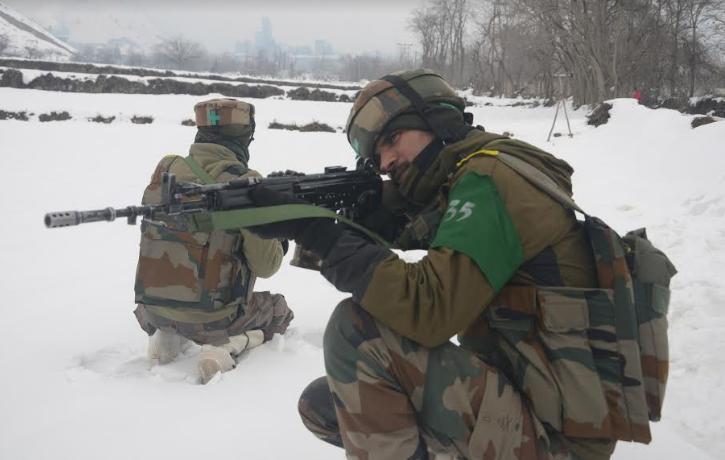 Photographs BASIT ZARGAR of a recent encounter at Pulwama, Kashmir.