Is It The Imagination Or Has the Word Migrant Acquired a Racist Tinge Already?

Death stares them in the face

‘They’ --- the ‘those’ we want to ignore, to banish from sight---came out yet again. In Mumbai, In Gujarat, in Telangana --- a sore reminder of ourselves, our absence of policy, our indifference indeed callousness to their plight. Our dislike and intolerance was perhaps best encapsulated by this young thing described as a reporter for one of our august television channels when she started lecturing a group of befuddled men on how irresponsible they were, how could they come out like this onto the streets and endanger everyone's lives, how could they---surely you should have been responsible she kept repeating in hysterical tones as if she was looking at Covid-19 itself. For me the ultimate insult from this woman was-- we are all stuck, we are bearing it, you should too!!

They didn’t even try to argue. They have given up a long time ago. They did try to point out that they were coming out because they had no jobs and no food, cramped in tiny shanties ten or more in a few feet of space, and they just wanted to go home. But she was not listening, as indeed we are not and instead trying to block out one of the worst humanitarian crises India is facing, from the public view. Either by giving it a spin, or by blaming some state government ---the centre of course cannot be wrong---and insisting that these ‘migrants’ ---is it my imagination or has the word acquired a racist tinge already---need to be where they are. In their hovels with no food, no water, and conditions we would not put our animals in.

Twitter started trending against the Maharashtra minister Aaditya Thackeray for suggesting that the poor workers do not want food and dole, but just to go home. August anchors joined their hefty voices to challenge this claim as well but subsequently citizens who are doing a better job of reporting than these well paid, well nurtured and protected TV celebrities are ---(can’t call them journalists without finally accepting the end of journalism that my heart still rebels against) ---and smaller media started carrying the news that no it was not a criminal conspiracy against the rich, no they had not come to indulge in violence, and that perhaps a TV channel itself had reported the possibility of trains being run from Mumbai to their homes, and that indeed they had gathered thinking there might be trains despite the PM’s announcement extending the lockdown. As it turns out from reports yet to be officially confirmed, Indian Railways has issued at least 15 lakh tickets during this two week period. And as far as we know, no cancellation refund announcement as yet.

The police was brought in to lathi charge and disperse ‘them’, so that the ‘other’ should not spoil the indian narrative of ‘success’ by spotlighting hunger, joblessness, illness (not from Covid19) and sheer suffering. We don’t like to be reminded of this, and hence find solace every night in those TV shows (those befooled call it news) where we can blame the Muslims (but even we have to admit that this story too has been overtaken by sheer numbers), despise the poor except for a passing reference to assuage our conscience, and of course talk of war with Pakistan. Incidentally as one writes reports from shelling at the LoC come pouring in --- we say it is Pakistan, Pakistan says it is India --- the story since ever-- and in the process the poor villagers worried about the virus as much as any of us, start fleeing homes to save their lives from the artillery of hate. Till yesterday at least three innocents had died because of these war games, and several injured.

We are doing to the poor now what we have done to Kashmir for decades. Handing out doles. They want dignity and respect through proper planning, not just dole. Yes food is necessary to help them cope, but we have to restore dignity into their lives at a time of deep and real fear. Police lathis break their hope, to a point where the life of poverty they came to escape from now seems far better than the shanties they have been crowded into. Small wonder that the workers who run our cities by the way, now want to go back home to their villages, where there is respect, free air to breathe, and some escape from hunger because of the very structure of social life available to the urban poor.

The extension of curfew did come as a surprise as all had started expecting some relaxation, enough to get them home. Just hope that this would end, and they could go back to their families. Panic struck the first wave of workers and labour had come out at the start of the lockdown and beaten indoors into ‘shelters’ that resemble prisons as many will tell you; the second wave now emerged for similar reasons. Interestingly the TV celebrities are airing their concern for the ‘poor’ not by insisting on stimulus packages, a solid plan of the Kerala kind, sound and thorough implementation but by reducing the coverage to a slug fest between centre and state.

Currently the central government and the Maharashtra government are trading blows ---your fault, no your fault, with the social media taking sides and slugging away with the usual dose of abuse and just totally hateful language. The need of the hour is for all to work together, for the central government to have spent the three weeks to work out a plan for the workers with the states ---more so for the cities that are run by these poor helpless people from the villages of other states----announced hefty stimulus packages, and put a huge implementing apparatus into operation.

But then who are we to say what those who command India should do. It is not for us to ponder why, but swallow the dose of propaganda dished out to us by those TV celebrities every night. Interesting though when one of them was caught on his turf by author Yval Noah Harari who said he was very worried about stories that some people are blaming the pandemic on the Muslim minorities, that it was an act of terrorism which is complete nonsense, and extremely dangerous as in these times we don’t need more hatred, more love, more solidarity amongst the people. The anchor looked totally bewildered, as to how could any guest not join in the cacophony of hate! World bodies have also issued similar warning, but even so the trolls continue with dastardly acts of violence being reported against the minorities here.

This is not the time for hate or polarisation but for concerted action. India’s health infrastructure ---all governments and leaders will admit---is not able to deliver outside certain cities and spaces even on a normal day. The pandemic has put tremendous pressure on the medical structure and fraternity, but despite this proper equipment, gear, has not been made available to doctors and health workers. Instead prejudice and fear that has been generated in place of awareness has resulted in attacks on health workers in localities where people are fed by prejudice and fear; and many doctors and nurses have fallen victim to the Coronavirus because of the scarcity of protective gear while treating patients.

The huge humanitarian crisis that is looming needs to be dealt with ---and to use a favourite word heard all the time these days ---on a ‘war’ footing. Social distancing means little to those cramped in slums and a coordinated effort should have been made to run trains for them to send them back to cities in the states. Food that Minister Paswan --- oh how his tune has changed over the years--- admits is lying in the godowns for an ‘emergency’ should have been distributed to the poor in bulk ---- released, transported and distributed. Not at all a major task for governments.

Meanwhile those of us cowering in our homes should cower with the sobering thought that we are the ones who brought Covid-19 into the country, we are responsible for the spread, and it is the workers and the migrant poor who have caught it from us, not the other way around. So when we ring panic bells in our resident associations about that maid smoking in the park ---look at that, said this lady, how can she, smoking will make the virus spread!!!---or scream about two poor construction women sighted in our elite colony, let us remember that we are the bigger carriers not them!

This virus does not have a race, a caste, a class, a colour or a religion. A divided, fractured society will not be able to cope with the crisis and the poor are already feeling the brunt, being pushed to a stage where death stares them in the face. From Covid-19 or Hunger. They cannot even take a pick. 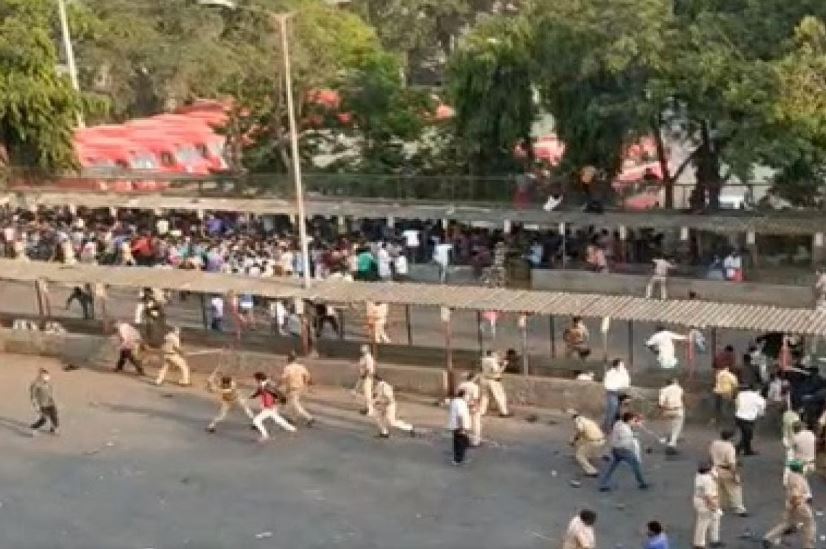 The Sun Doesn’t Just Rise, It Explodes in Puranikoti !

Gaza- A “Cash Cow” For Netanyahu and Israeli Arms Industry