They Are Dying Everyday, Does Anyone Care?

The long march home was stopped by police lathis and oppressive measures, and as suddenly as the poor of India exploded on the streets so they disappeared. The middle class and above could breathe a sigh of relief, and settle back indoors as those impinging on the dregs of a collective conscience had been pushed out of public view.

That all was not well came from the sporadic outbursts. The tin shed housing migrants in Delhi was set on fire, others emerged on the roads in Surat only to disappear again, but clearly the dreaded lathi had worked in terrorising the workers of India. The fear, however, faded besides the sad and pathetic conditions they were forced into and the first big sign of this again was when thousands converged in Bandra following a rumour that trains would be running to take them home. That certain news channels and celebrity anchors chose to see the mosque in the background, and not the hunger and the desperation on the faces of the poor speaks volumes for not just the media but the class to which it caters.

In Surat the workers came out in the hundreds, and once again the dam burst as those who had been invisibilized came out. Not seeking attention, just food and succour. The hovels in which they lived to earn a living and send money back home had become like airless prisons during the lockdown, and the ‘relief camps’ set up for those stranded at the borders were worse. Their earnings had stopped, there was no money to eat, and except for irregular supplies from good samaritans as and when, there was little else by way of help in these dark times. The few spoken to during these tense days had only one statement to make, “we want to go home.” Home being the village they had left to earn money, and the urban city where they sold vegetables, or repaired roads, or cleaned the drains having turned into a prison from which escape was blocked by the dreaded police and the state authorities.

The long march resumed again as the government showed no signs of providing buses, or trains, or transport of any kind. And when it did the fares were so high that even the middle class would have hesitated to use the Indian railways for a trip out. Karnataka announced trains, then cancelled these, and then decided to go ahead -- all in the span of hours, creating chaos and confusion. In Surat, workers are coming out again and again to somehow escape the police baton and begin the journey home. Earlier this week they clashed with the police and drove back indoors again after a lathi charge and tear gas shells. At least 50 migrants tonsured their heads in protest, pointing out that earlier buses had been allowed, but now again cancelled.

States are also fighting not to own, but to disown the workers who have spent their lives revving up the economy and building India. The cops at the UP-Rajasthan border clashed as the one tried to “push” migrants into their home state across barricades. According to media reports about 300 migrants had gathered at the sealed borders in Rajasthan to go across to their villages in UP. The video being shared has the cops from both states shouting at each other, shoving and pushing as the group of helpless migrants watch. Where is your name plate, shouted a cop at another who shouted back, you have broken my hand. But the one fact that was stark and clear to the migrants watching the police - no one wants them. Not the state where they went to work, and not the state that is their home. 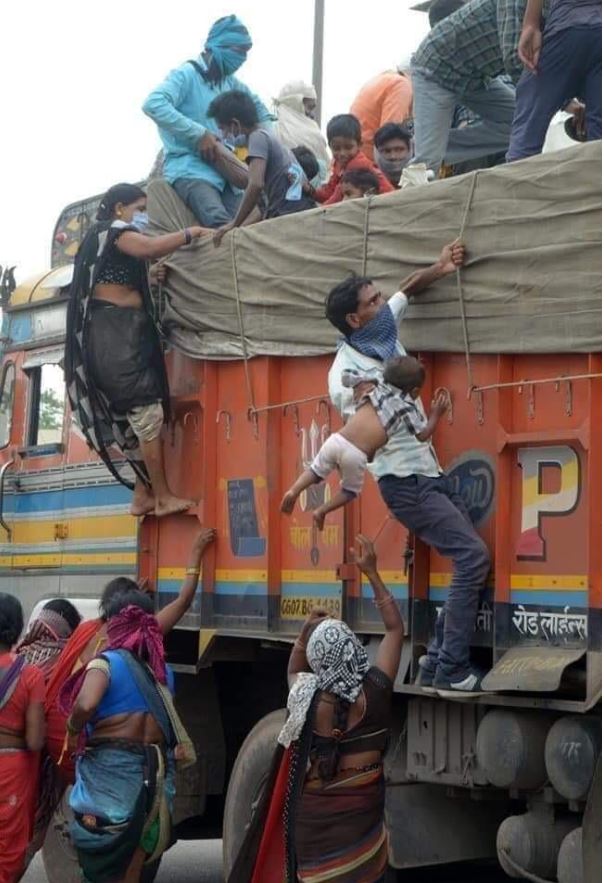 Unable to bear this vacillation thousands, even as one writes this, are walking on the roads with their meagre belongings, their hungry and tired children, their ailing relatives with the pot of gold at the end of the murky rainbow being their village, and home.

The scenes being shared are heart rending. The workers clambering aboard a bus, clutching on to children as they are passed into the truck while worried mothers look on; men crying on the roads, unsure of where and how they will feed their families; and in the midst of all this the big accidents where exhausted workers were mowed down by a train at Aurangabad. And again today where in two separate incidents migrants were mowed down by speeding cars.Six died when a truck they had hitched a ride in overturned. Some killed, some injured in hospital with serious injuries. And probably more to follow.

The sheer human suffering is deeply disturbing. The refusal of the media to embrace the poor disheartening. The apathy of the politician with the labour laws being diluted to help businesses recover inexcusable. It is no surprise that the states that have rushed to dilute the labour laws, or as in the case of Uttar Pradesh remove itself from all but three labour laws, are ruled by the BJP and the Congress parties. Uttar Pradesh leads, with Gujarat, Madhya Pradesh, Haryana, Himachal Pradesh, Rajasthan and Punjab moving to extend work hours from 8 to 12, give employers more freedom to hire and fire employees, to exempt factories, industries from laws protecting labour, etc.

Eight political parties have written to President Ram Nath Kovind protesting against this ,saying that workers are being treated as slaves. "Reducing them [labour laws] to this status is not merely a violation of the Constitution, but it's nullification," the letter stated. "The government has done little to help those who lost their livelihood. 14 crore workers have lost their jobs since the lockdown began,"it added.

Behind each migrant on the roads is a story of suffering, hardship and,loss. Their lives are in tatters, they have no way to reach home, they are losing family members even as they walk, and they have no idea whether the hard and tortuous journey will reach them back home. They do know though that no one cares. Not the people they worked for, not the media that is in place to write for them, not the politician who does not want to see them as they make bad visuals, add to adverse propaganda, and puncture the feel good stories of flowers and rose petals where even that fast disappearing collective conscience feels the strain.