We have a lot to thank the C-virus and the lockdown for. I'm not speaking here of its environmental benefits- that subject we shall set aside for a later date in the manner of the Supreme Court setting aside the matter of violation of fundamental rights by the government for a more "appropriate time." That is, if we survive the virus, both the Chinese one and the mysterious " Indian" one recently referred to by the Nepalese Prime Minister. Ever since our lockdown, now christened "tapasya", started I have been marveling at the surge of creativity among our populace, both the rulers and the ruled.

Heading this list of ideators, like Abu ben Adam, is none other than my own Chief Minister, Shri Jai Ram Thakur of Himachal, not to be confused with the other " Sholay" Thakur who is wont to urge people to use dissenters for target practice. Anguished by the collapse of tourism which accounts for almost 10% of the state GDP, the CM sought to promote what he called " Quarantine Tourism"- that is, anyone anywhere who has to go into isolation should come to Himachal whose hotels would be overjoyed to receive these possible carriers of the virus in their thousands. They could recover-or die- in the shadow of the mountains and in the lap of nature.

Unfortunately, those already ensconced in the said lap- the local janta- refused to allow the state to become a petri dish or Dr. Lal's Pathlap, as it were, and have rejected the CM's epiphany. We will probably hear no more of this bright idea whose time, regrettably, has not yet come.

But the matter should not end there; as the vicar told the choir boy: we should get to the bottom of it. Because my concern is this: if the idea was Mr. Thakur's alone, we can handle it. But if someone suggested it to him, that would mean there are TWO such geniuses on the loose in the state, and that would be a catastrophe. Some contact tracing is called for here, methinks.

Did Malaysia Tourism have a better idea, or was it targeting a, well, niche segment, when it put up this poster at one of its airports? 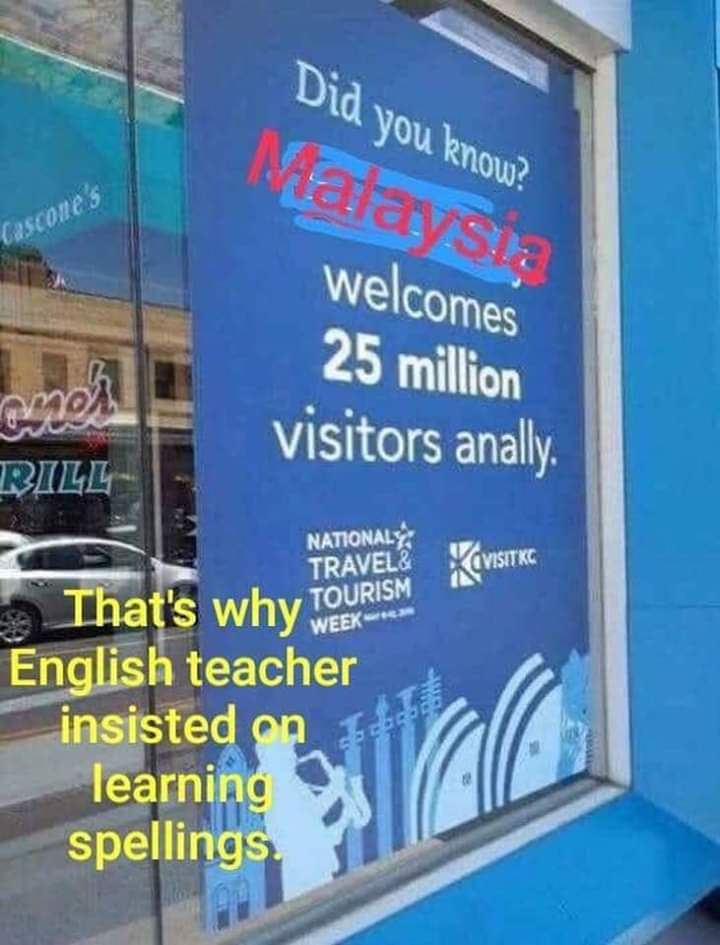 One has seen many forms of welcome but this does sound rather out-of the- jocks. I am not aware of the response to this ad campaign, or whether tourists are bending over backwards ( perhaps forwards in this case) to rush to Malaysia , or whether the country even has the logistical wherewithal to provide this special welcome.

But I suspect that Malaysia needs one of two consultants: Mr. Shashi Tharoor if the operative word in that ad is a spelling mistake, or a Mr. Suhel Seth type to suggest a less intrusive form of welcome. In any case, my earnest hope is that the Himachal Chief Minister doesn't get to see this poster for it doesn't take much for flights of fancy to take off these days.

Swiftly moving from the anal to the mathematical, I have to admit that my maths is no better than our Finance Minister's, even though, unlike her, I know the difference between a stimulus and a joke. I have been unable to grasp the significance of a term much in vogue these days- "exponential growth". Does it mean, for example, a double, or triple or quadruple increase ? Was it discovered by Einstein or Newton? ( I must remember to ask Mr. Piyush Goel, our Railway Minister, when I meet him next at Gorakhpur or Ranchi or Rourkela, the most likely destinations for a Shramic Special intended for Siwan).

But I am no longer ignorant about the concept itself, thanks to the tapasya and the opportunity it has given a friend, who has a roving eye( and hands), to explain it to me. For the sake of clarity, and to obviate the need for any clarifications a-la- Ministry of Home Affairs, I reproduce verbatim his explanation:

" Suppose a guy, who has COVID, has a torrid affair with a girl and passes on the infection to her, that would be incremental growth of the disease. The girl, a bit of a mover and shaker herself, happens to be simultaneously carrying on with two other Lotharios and infects them too: that would be mathematical growth. One of these two men has two other girl friends and passes on the virus to them, that is geometrical growth. One of these girls, who takes "work from home" quite literally, has three other lusty boy friends and makes them count. Three more COVID patients. So now, in the time it takes to lay me down, we have gone from one to eight- that, old chap, is exponential growth."

Nothing like a dash of sex to make things amply clear. But I have a suggestion for the government: distribute a pack of condoms with each mask to prevent a sexponential growth of population by next year.

But credit must be given where it is due: the government has been wonderfully creative in suspending troublesome rules and obstacles in the way of combating the virus, and I am not referring to the suspension of those Delhi officers who sent buses to Anand Vihar to transport those migrants, or that poor IAS chap in Karnataka who felt the workers deserved a better deal.

The government has suspended DA instalments for one year, some states have suspended those pesky labour laws which, we now learn, were the real culprits holding back the five trillion dollar economy, even the Supreme Court appears to have suspended fundamental rights in the larger interest of the nation. But the most significant of all is depicted below: 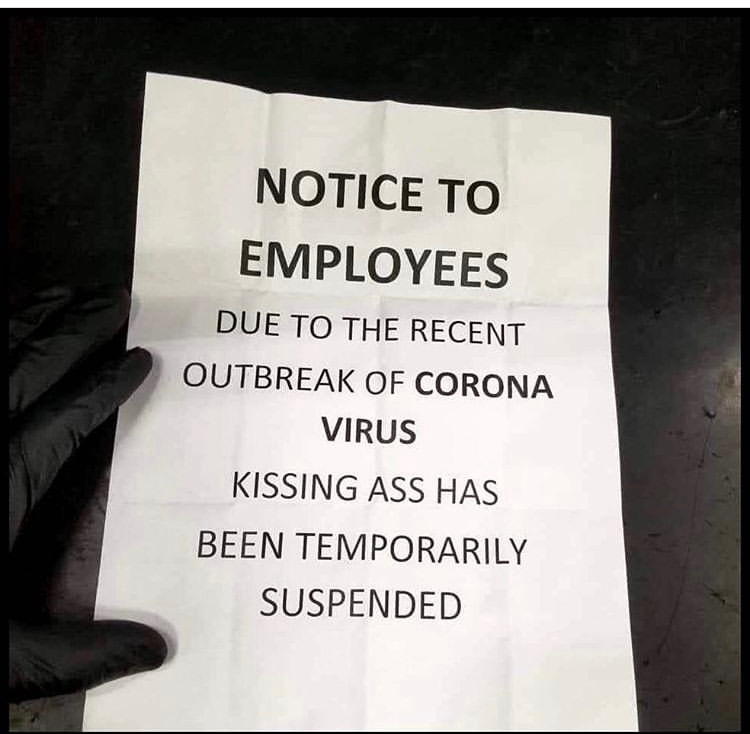 This , to me, is the most progressive decision taken so far. It is a reform of monumental proportions. This activity took up most of the time of employees in both the public and private sectors; its suspension will now make them "atmanirbhar" and we can now put our shoulder to the wheel, and the money where the mouth is ( or used to be). instead of the reverse.

But as usual I still have a doubt: has this ass kissing been suspended with prospective effect or retrospectively? Will the practice be restored once the virus has been shown the door, and will the poor slobs have to make up for the foregone kisses during the suspension period? Does it apply to politicians as well? Will the practice be reintroduced when the good days and the currently locked down posteriors return? Weighty questions which, I have no doubt, the NITI AYOG will address once it figures how it messed up on the economy and just about everything else it has handled so far.