Mao Zedong, first president of the People’s Republic of China, had designs on “reclaiming” territories to the west of China, by placing the “Chinese hand” over the region. Tibet was likened to the palm of the hand, and the fingers were Ladakh, Nepal, Bhutan, Sikkim and NEFA (now Arunachal Pradesh), spreading across the whole Himalayan range.

Nepal, Bhutan, Sikkim and Arunachal may have political and economic value for China, but it values Ladakh for its strategic importance, and is its so-called ‘first finger’.

China imports 70% of its oil from the Middle East countries by sea. The sea route is through the Arabian Sea, Straits of Malacca, and the South China Sea. China is well aware that the Indian Navy (and other navies too) could choke off China’s oil sea route in case of a conflagration. It has therefore invested in constructing Gwadar port as a Special Economic Zone on Pakistan’s Arabian Sea coast.

Gwadar, just 180-km east of Iran’s Chabahar port – in which India has substantial investment – is the western end of the China-Pakistan Economic Corridor (CPEC). It is the starting point of a route to transport oil overland through Khunjerab Pass into China’s Xinjiang province, and onward to the Lhasa railhead in Tibet. Gwadar also provides China’s Navy a safe port with ability to monitor international oil shipments.

Importance of Ladakh
The route to Gwadar via Khunjerab Pass is through the Gilgit-Baltistan region. China has invested heavily in Gilgit-Baltistan to build roads and other infrastructure in Pakistan Occupied Kashmir (POK).

The Gilgit-Baltistan region and the Aksai Chin region in north-eastern Ladakh, were part of the pre-Independence princely state of Jammu & Kashmir, which acceded to India. Today Gilgit-Baltistan is in POK, and China occupies Aksai Chin.

China’s strategic ‘first finger’
China’s ‘first finger’ points at Ladakh and beyond to Gilgit-Baltistan in POK. However, the Indian Army (IA), with support of the Indian Air Force (IAF), holds Ladakh against China’s People’s Liberation Army (PLA) on the East and the Pakistan Army on the West, to foil China’s strategic aim of linking-up Aksai Chin with Gilgit. [“The Ball is Squarely in the Political Court – Second-guessing China”; The Citizen; June 18, 2020; https://www.thecitizen.in/index.php/en/NewsDetail/index/4/18911/The-Ball-is-Squarely-In-the-Political-Court ].

IA holding Daulat Beg Oldi (DBO) with the Durbuk-Shyok-DBO (D-S-DBO) Road, and the Western part of Pangong Tso, effectively stops PLA at the Line of Actual Control (LAC). PLA has made many attempts over the years to incrementally occupy areas and shift the LAC.

The 15 June flash-point between IA and PLA is upstream of Galwan river confluence with Shyok river [Area ‘A’ in the Sketch]. This is connected with the face-off on the northern shore of Pangong Tso [Area ‘B’ in the Sketch].

China has strengthened PLA bases on the Lhasa-Xinjiang NH-314 highway passing through Aksai Chin. It has built roads connecting NH-314 with Spangur and Pangong Tso. China may well contemplate attack to capture Lukung and gain access to Durbuk and the Shyok valley, while interdicting India’s D-S-DBO Road at Depsang, Burtse and Galwan.

PLA takes advantage of the contradiction between Modi-Xi Jinping’s overt personal bonhomie and the hostility on ground, to continue its policy of “two steps forward, talks, one step back, and consolidate”, to incrementally push the LAC towards India. Hence China will continue with this policy to gain tactically valuable positions for a possible push towards POK. The current Galwan situation is one such.

In pursuance of its ‘first finger’ with the ‘palm’ firmly in Tibet, PLA’s aim would be to advance down the Shyok valley, and as Pakistan pushes Eastwards up the Shyok valley to keep second-front pressure on IA and IAF, cut off Siachen Glacier and DBO from Leh. It will then control all areas north of the Ladakh mountain range to create a totally new LAC for India with both China and Pakistan. [S.G.Vombatkere; “The Ball is Squarely in the Political Court: Second-guessing China”; The Citizen; June 18, 2020; https://www.thecitizen.in/index.php/en/NewsDetail/index/4/18911/The-Ball-is-Squarely-In-the-Political-Court].

China occupies 38,000 sq-km in Aksai Chin, has instigated Nepal to claim India’s Lampiyadhura-Kalapani-Lipulekh (L-K-L) area, hardened its ground position at Doklam near both Bhutan and Sikkim, and claims 90,000 sq-km of territory in Arunachal Pradesh.

Thus, China is poised to intensify its push along the other four ‘fingers’, namely Nepal, Bhutan, Sikkim and Arunachal. This will tie up IA and IAF resources in the Central and Eastern Himalayas.

Obviously the ‘first finger’ push will not be easy for China as IA and IAF have adequate force levels in Ladakh along with the will to fight. But it is necessary for India to envisage such a scenario including China’s other four ‘fingers’ which will engage Indian forces – and dismiss it if intelligence assessments and military appreciations so dictate.

POK and Aksai Chin
Currently, India’s is a defensive posture, enabling China to make incremental tactical gains. India stops/preempts Chinese incursions/intrusions and tries to settle local or tactical border issues between local commanders according to India-China BDCA (Border Defence Cooperation Agreement), 2013, and not raise them to political level. PLA’s unsoldierly, unprovoked attack with deadly weapons on the unarmed Indian side at Galwan on 15 June, can hardly be said to be “settling” a local issue.

India needs to formulate a proactive strategy regarding POK and Aksai Chin to protect India’s territorial sovereignty. This needs to be war-gamed to balance the strategic advantage(s) against the certain military, and financial/economic costs.

The Chinese mood and Xi Jinping’s mind
Xi Jinping, undisputed leader of China, has a vision of Chinese international leadership and restoring China to past glory, with adherence to the founding values of the People’s Republic of China. It would be unsurprising if he harbours hegemonic intentions on the basis of Mao’s vision of placing the Chinese hand on Tibet with the fingers on India.

Xi’s triple role as President of the People’s Republic of China, General Secretary of the Communist Party of China, and China’s Military Commander-in-Chief, makes him enormously powerful on the domestic stage and in international fora. He believes in a combination of Confucianism, Maoism and nationalism of China’s past. His rise to power to the pinnacle of his ambition, may fuel a sense of his own infallibility to establish China’s power and influence beyond its borders, and a Confucian “xiaokang shehui” well-to-do society on the way to China becoming a “modern, prosperous, powerful, democratic, civilised and harmonious socialist country” by 2049, the Centenary of the PRC. [Francois Bougon; “Inside the mind of Xi Jinping”; C.Hurst & Co. Ltd, 2018].

Xi may recall former President Hu Jintao’s words: “As history has always shown, opportunities are extremely precious, but they are also fleeting”, and consider that the present state of affairs domestically and internationally is the fleeting window of opportunity to operationalize an Aksai Chin – POK link-up. It may serve several purposes:

- Enable a better CPEC and boost the core of the foreign policy Belt-and-Road Initiative, to ensure for himself a place in history on the occasion of the centenary of China’s Communist Party on July 23, 2021.
- Use Mao’s “hand” to “reclaim” territories.
- Assert military superiority over India, its strongest neighbour and competitor.
- Divert Chinese domestic public attention from internal problems (including Covid and its mismanagement) and divert international focus from its Hongkong clampdown.
- Humiliate and punish India for forging civil-military links with USA, Australia & Japan, and supporting international moves holding China responsible for Covid.

What India needs to do
Insofar as Ladakh in particular and the other border areas are concerned, India is faced with internalizing the following:

- China’s incremental gains in Ladakh and elsewhere are due to India’s defensive policy.
- China’s possible ‘first finger’ designs for Aksai Chin – POK link-up, and simultaneously other ‘four fingers’ along the Himalayan border can become reality.
- India’s military-economic asymmetry with China will not improve in a hurry.

What India needs to do, perhaps in order of priority, is:
- Particularly vis-à-vis Ladakh, give Indian Army freedom for protective patrolling including local engagements, to vacate PLA’s intrusions/incursions, and back it by a well-researched, well-articulated, unequivocal diplomatic stance.
- War-game China’s “Mao’s hand” and “string of pearls” strategies to formulate a proactive military-diplomatic-economic strategy vis-à-vis China, with focus on oil, infrastructure and cyber security.
- Immediately raise a Mountain Strike Corps, and unburden the Indian Army from IS/CI duties, freeing it for primary-role deployment to replace CAPF on the borders, and freeing CAPF for IS/CI duties.
- Immediately release/publish the 1963 Henderson-Brookes Bhagat Report on the 1962 debacle. The current political-military-bureaucratic establishment must learn from it.
- Focus on tension reduction vis-à-vis Pakistan, backed by say-it-as-it-is intelligence reports, with continuing military preparedness on the IB/LOC/LAC.
- Enhance national integrity by using proactive, non-electoral political tools of consultation, discussion and negotiation in all on-going domestic disputes and situations, instead of coercion and force.
- Institutionalize, formalize and integrate India’s military in national strategy formulation and decision-making. 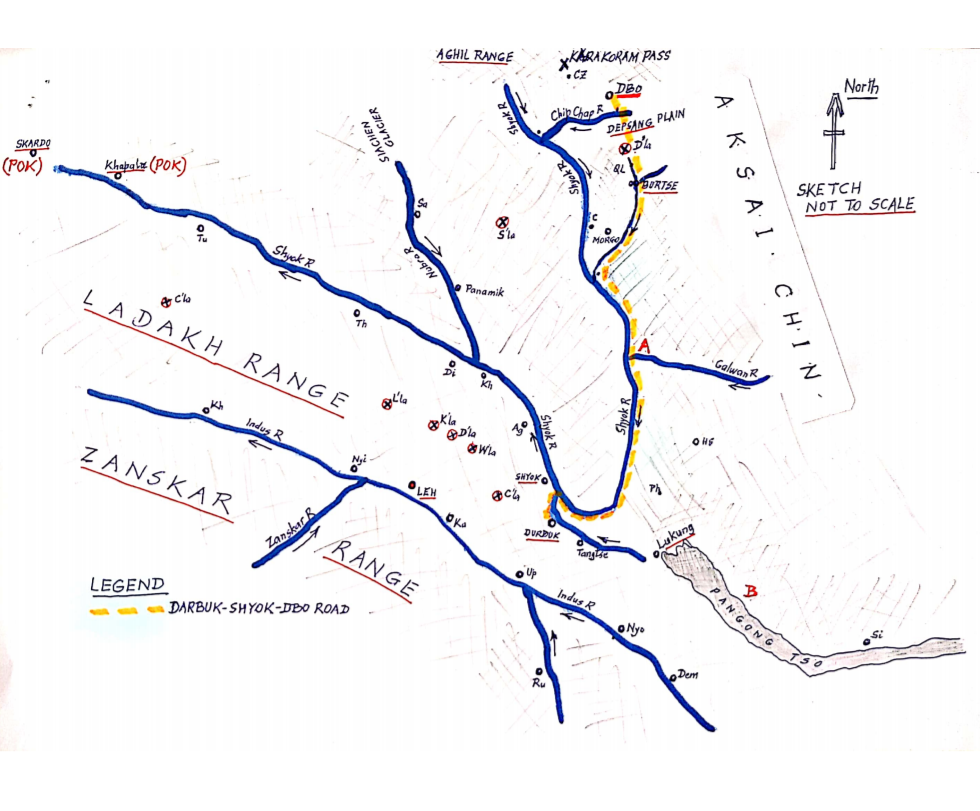 Major General S.G.Vombatkere has over 5-years experience in Ladakh and has boots-on-ground knowledge of terrain realities.

Cover Photograph: Sketch of the area by Maj Gen S.G.Vombatkere