The Galwan crisis in Ladakh of June 15 is very fresh in every Indians’ mind and in spite of the fact that there have been a series of meetings at various military and diplomatic levels, the crisis is far from resolved.

On June 7 itself, various news channels claimed that the Chinese Army has withdrawn one to one and half kilometre in the Gawan Valley and possibly in the Pangong Tso area is not very encouraging. The known deployment of the Chinese Army in the Ladakh sector now has three mechanised divisions and up to two regiments worth of infantry.

The open sources information suggest a mechanised division each opposite our positions In Daulat Beg Oldie (DBO) in the West, in the Central Sector and opposite Chushul area in the East.

The Galwan Valley & Pangog Tso area continue to have up to two regiments worth which are there, dug in or in semi-permanent positions as the available satellite and google imagery suggests.

The claimed withdrawal, therefore, does not suggest a planned, but rearward movement possibly due to reported flooding in the Galwan Nala affecting the deployment area of their troops. Notwithstanding the veracity of the reports, which have not been made public by a structured briefing by the Ministry of Defence, it is clear that the Chinese are very cautious and possibly not in mood to follow the agreed stance at the highest military leadership meeting in the area of operation, yet again. History and our recent experience with Chinese should make us most skeptical of the agreements.

On July 8 we get a news item on the media that the Chinese will withdraw consequent to the discussions between the National Security Advior, Ajit Doval and the Chinese Foreign Minister Wang Yi. Details of the discussions are not in the public domain but the news that discussion lasted for two hours possibly buttresses the claim of Chinese agreement of withdrawal.

The basic question is whether the agreed withdrawal is only up to the claimed LAC or status quo ante is to be restored. This might become clear in the next few weeks.

The Chinese, in the meantime, are under tremendous pressure from the European Union, the USA and even India due to problems in Hong Kong and Taiwan, economic sanctions, closures of Apps, allegation of spreading Covid19 and a general effort at isolating China. This along with the internal problems of the Chinese political system combined with the developments in the South China Sea, with major presence of the US Navy makes the strategic scenario very interesting for China watchers.

The question now for India is, are the Chinese bent upon a military offensive against India for their strategic advantage of dominance of the newly constructed Darbuk- Shyok- DBO road by changing the existing perception of the LAC in Ladakh?

If so, then how will the war unfold and what could be the scale of the offensive?

It is safe to assume that planners at the services HQs have looked into every aspect of war with all the inputs available. However, the recent experience of the public has not been very reassuring as the Chinese took us by surprise and we knew about their arrival only when they deployed!

It was sort of a repeat of the 1962 War when the lack of timely and credible intelligence was one of the reasons for us to lose the war, even before it started, while the majority of our forces remained unused including our strong Air Force.

It is rather evident from the Pangong & Galwan Crisis that the intelligence was either not available, or did not reach the right place for timely action. The instruments and the huge intelligence infrastructure, therefore, must be made accountable.

Having said this, let us look at the options and strategic interests that the Chinese have from North East up to Ladakh and the Karakoram Pass.

It has been debated many times that the Chinese interest and claim on entire Arunachal Pradesh, Bhutan and Sikkim is basically as a bargaining chip for concessions in Ladakh and Akshai Chin, while nothing much of strategic interest is there for them in the central areas.

Therefore, the basic thrust of Chinese strategy will possibly unfold in Ladakh.

Out of a total reported presence of 13 to 14 Chinese Divisions in Tibet, open sources indicate approximately four divisions worth is posturing opposite Ladakh. News also suggest around 40 J 7 Chinese fighters have landed in Sakardu in POK and the Pakistan Army has moved around 20,000 troops in that area.

Normally you will hear that we might face a Two Front War and mostly the planners will claim that this too would be most unlikely. However, in my view considering the current doctrinal, technological & economic development in China, India is likely to face a Five Front War not as the worst case but as the most likely scenario.

The overall war is likely to unfold with well-orchestrated Psychological, Media and Legal Warfare using all the facets at the national and international level to shape the perception of the nation and the international community.

The Five Fronts war may then unfold as under:-

2. Use of their assets in the Red Corridor. This could manifest in the form of concerted attack on the civil governance system by the Maoists and ultra-leftist organizations with the aim of crippling the civil administration. The present issue with Nepal might escalate in coordination with the same forces.

3. Use of the anti -India Communal Forces to have a coordinated Dharna/Pradarshan. With full support of our gullible media & some political parties, this could lead to coordinated communal riots across the country, especially in the sensitive areas adjoining Bangladesh and Jammu and Kashmir with the aim of delaying / disrupting the logistic build up and movement of our assets.

5. Attack by Pakistan in a standalone mode or in coordination with China, with limited objectives, which is most likely.

The country, in general, and the Defence Forces and the political leadership in particular must realise this most dangerous possibility of a Five Front War and prepare accordingly with all available resources.

Can India deal with and win this Five Front War? Of course, India can! As accepting the problem is the very first stage of finding a solution. 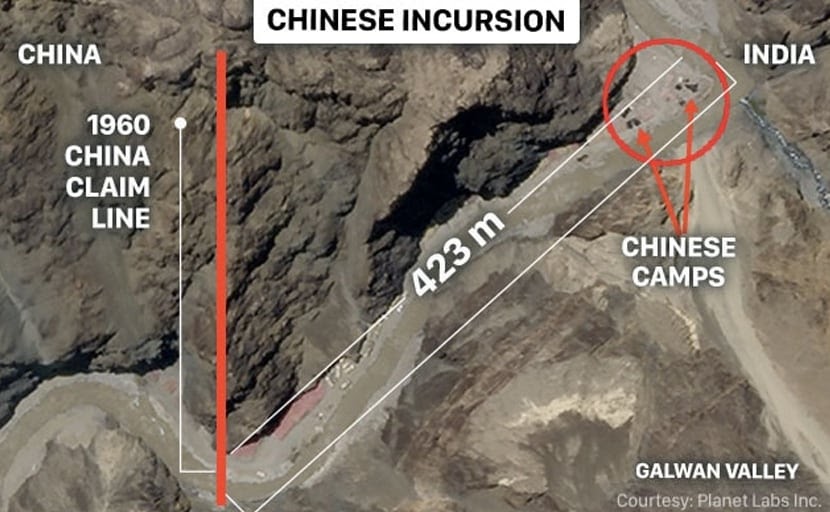 Major General Prakash Panjikar (Retd) is a battle hardened, decorated soldier with decades of experience. He is an independent strategic thinker on the higher directions of war.

Maps as published in the Indian media - NDTV, Business Today