This was to enable India to be linked to Afghanistan and Central Asia, circumventing an obstinate Pakistan that prevents India and Afghanistan from trading with each other by land.

The Indian company IRCON started working on the feasibility of the project. It was also agreed between India and Iran that after completing the first phase of Chabahar Port project, India will start on the second phase involving infrastructure development and much more. 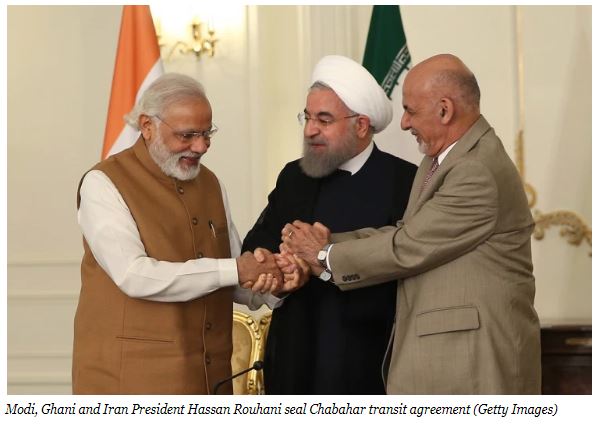 Now latest reports indicate that Iran has decided to edge India out and that China is stepping in. However, Iran has officially denied that India has been edged out by it. It has also made statements denying the denial.

Having spent three years in the Indian Embassy in Tehran during from 1976, when the Shah was at the zenith of his glory celebrating the completion of 2500 years of the Persian Empire, and 1979 when an exiled Shah was searching for political asylum, with Ayatollah Khomeini in power in Iran, I do not take Iran’s denial seriously. Iranians are past masters in playing diplomatic chess even though chess went to the West from India through Iran.

Let us look at the big picture as it has emerged so far, even as it is far from immutable. ‘Chabahar’ means literally ‘four springs’. India has been involved in the development of Chabahar port since 2003. Progress was slow partly because of India’s well-known inability to deliver on infrastructural projects, and even more importantly, because of the Damocles’ sword of U.S. sanctions on Iran and those who do dare to do business with it.

By 2016, India completed the first phase and re-confirmed its determination to compensate for the past delay.

The 2016 agreement referred to above was a significant part of India’s plans to enhance its strategic reach. Little did Modi and his fellow signatories know then that Donald Trump would capture the Republican Party and get into the White House in the election held later that year; and that he would walk out of the Iran deal, and re-impose sanctions on Iran and those who do business with it, without the favor of a ‘waiver’ from Washington.

- Was there an option for India to take an independent line with Washington after Trump walked out of the nuclear deal, and preserve relations with Iran without complying with alacrity with the Trumpian sanctions?

- Did India foresee Trump’s act and plan ahead how to deal with it?

Whether it was possible or not to stand up to Trump, what is lamentable is that New Delhi did not even think of such a possibility. It dared not think out of the box and tell Trump that for exceptionally important strategic reasons India needed to import oil from Iran and maintain its economic relations with that country.

India repeatedly and meekly asked for ‘waiver’; Trump terminated the temporary waiver he had given; and India, at considerable cost to itself stopped importing oil from Iran.

In short, India chose to punch much below its weight. As a major importer of US arms, India has a trump card to play against Trump, the most enthusiastic salesman for the military-industrial complex.

Though a somewhat ‘half-hearted’ waiver was given in respect of Chabahar and the associated transport corridor, the Indian Company IRCON found it difficult to do its job as international companies, irrationally scared of U.S. sanctions, refused to cooperate.

Iran was deeply disappointed by India’s hasty compliance with U.S.’s ‘ukase’ on sanctions and did not conceal its disappointment. One signal was that India’s ONGC (Videsh) was not making any progress with its bid for exploring for oil in Farzad-B, a huge gas field.

We live in an interconnected world and what happens between India and Iran depends also on what other powers do. The diplomatic chess board has always more than two players. We have seen the impact of U.S. on Indo-Iranian relations.

Let us look at another significant actor, China. Modi was in Tehran in May 2016. In January 2016, Tehran had hosted President Xi Jinping, a leader who does not lack a geopolitical vision and has some ability to think out of the box, an essential quality for a rising power.

Unlike India, China defied the U.S. sanctions and continued to import oil from Iran. China imports 60% of its oil from the Persian Gulf and is naturally concerned that the U.S. Navy might one day close the Malacca Straits. Pakistan that bought Gwadar, a fishing village, from Oman at a cost of $ 3 million in 1958,and wanted to develop a port there, was short of funds. China stepped in with outright grants and interest-free loans, and wanted to include the port in its grand Belt and Road project that included the CPEC (China-Pakistan-Economic Corridor) going through India’s territory occupied by Pakistan, including a part thereof that Pakistan generously ‘gifted’ to China in 1963.

Iran has officially stated that it has started work on the transport corridor project and on exploring for oil in the gas field Farzad-B on its own, and that India can join at a later date. However, China looms over both projects. China has offered a deal to invest $400 billion over 25 years in Iran. If this deal goes through China might take over both the projects edging out India.

Some Indian scholars have argued that the conservative elements in Iran might prevent the signing of any such deal with China persecuting its own Muslim subjects in Xinjiang. It appears that Ayatollah Khamenei is not opposed to the deal.

With Gwadar, the big deal with Iran under negotiation , and with the possible involvement in the enlargement of the port in Bandar-e- Jask on the Gulf of Oman, close to the Straits of Hormuz , China has made much progress in establishing itself as the most important strategic partner of Iran, with increasing clout in the region.

India should learn a few lessons:

- Instead of signing 12 agreements when the Prime Minister visited Tehran in 2016, it would have been better to have signed three agreements and delivered them.

- Any power that wants to rise has to stand up to U.S. at times. The U.S. has no nursery to grow Great Powers.

- Iran too is an ancient civilization and has to be dealt with sensitivity.

- Diplomacy requires the ability to dance with more than one partner at a time.

Ambassador K.P.Fabian is retired from the Indian Foreign Service, and has served in Iran amongst other countries. His podcasts on current affairs are at http://www.ambassador-fabian.com/podcasts/