A month in Kashmir

One year ago today the state of Jammu & Kashmir was stripped of its special status by abrogation of Article 370, thereby reduced to UT status.

I was born in Kashmir when it was called Riyasat. After the Maharaja signed the instrument of accession with India, Shaikh Mohammad Abdullah became its first Prime Minister. A new era began when Shaikh Sahib and Pandit Nehru stood hand in hand in Lal Chowk Srinagar and promised Plebiscite under the United Nations.

I write this today after spending one month in the valley. I was mostly confined to the house because of the lockdown within lockdown. The Kashmir that I ‘saw’ was through talks with friends and by reading literature written by women and men of Kashmir and of the diaspora, people of great courage.

Reeling under 600,000 security forces, Kashmir is described in international press as the most militarised region of the world. News is non existent, newspapers are censored and 2G connectivity has limitations. Srinagar Times was delivered to the house everyday. It flashed large photos of the LG Girish Murmu and other officials holding forth on COVID 19. News like ‘firing in Mewa Bagh, Shopian’. ‘Six militants gunned down’. ‘Civilian collateral damage’ was ‘minor news’.

The police reported significant increase of ‘mukhbirs’ (informers) which they said resulted in large scale militant wipe out. But of a total of 150 killed so far in 2020, 17 were foreign the rest were local boys. This is at odds with JK police claim that local militancy had reduced. So far this year 88% militants were locals; a sharp rise from last year.

Disaffection among the youth is an all time high. All measures to subjugate and occupy this ‘atoot aang’ has yielded nothing but despair. In one year in the name of integration and development Kashmiris have been subjected to unprecedented oppression.

Amendment to Control of Building Operations Act 1988 or J&K Development Act 1970 allows the Indian Army to carry out unhindered constructions in any area they identify as ‘strategic’. Abrogation of 35A is a potent instrument of changing demography of the state. Now all you need is fifteen years residence, Class 10 and Class 12 education and you are a state subject. Hence eligible to owning property. There is talk in corridors of power about ‘Indians Only’ settlements in the Valley.

The is talk also of Deradicalization Camps for Kashmiri Youth, along the lines of internment camps for Uighur in China. Genocide Alert has placed Kashmir on its ‘watch out’ list. The signs are ominous. Countless killings, extrajudicial murders, human shields, pellet victims, the list goes on.

Only in ‘settler colonialism’ can movement be restricted as I experienced on my last day. It happened to be Eidul Adha. For travel, I dressed as I always do in a sari. Later I thought, had I been in a pheran, I may not have made it to the airport. Concertina wires were laid everywhere. ‘Ye road bund hai’ “Wo road bund hai’.

I held up a print out of my boarding card. For the heck of it I had in my handbag my Kashmir birth certificate. I wonder what they would have done had I flashed that instead? My birth does not qualify me as a state subject; because I did not stay here 15 years at a stretch. That never bothered me because so far as property is concerned, many homes in Kashmir are my homes. Many orchards of peaches, plums, apricots, apples and figs are also my orchards.

It was in early 1990’s that Khushwant Singh gave me an assignment to translate in English Shaikh Abdullah’s biography Aatish e Chinar. It ran into 900 pages which I was asked to abridge to about 300 pages. Its author was the well known litterateur Mohammad Yusuf Tang who was Shaikh Sahib’s amanuensis. The book was published under Khushwant Singh’s name, rightly so because he was responsible for its final quality.

It was from this assignment that I learnt what the world calls masa’la e Kashmir. The epigraph of the book is Allama Iqbal’s couplet which today is the voice of Kashmir.

In the creed of its dust if there is fire of Chinar
That luminous dust can never turn cold.

Even as I write this piece, Kashmir is closed to itself and to the outside world. Gupkar Road where one year ago was drafted the Gupkar Declaration is blocked by army vehicles. One leader is incarcerated at home another in a government facility. Another stands at his gate behind barbed wires and says ‘Look! I am not free’. Fact and fiction is all mixed up. 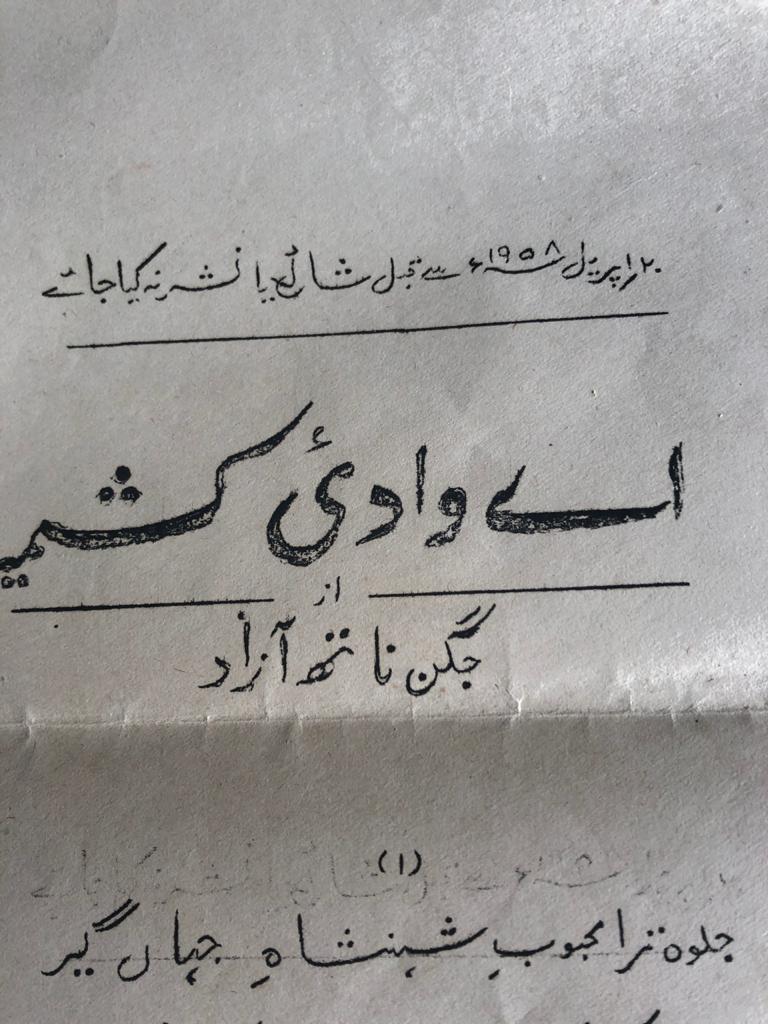 I was a small girl when a tall lanky poet originally from Mianwali in West Punjab used to visit our house. His name was Jagan Nath Azad. A few of his handwritten poems dated 1958 are in my collection. Azad wrote about the Prophet about Nizamuddin Auliya and most poignantly about Kashmir. His poem is titled Ai Wadi e Kashmir’.

Syeda Hameed is a former member of India's Planning Commision. She is also the Chancellor of the Maulana Azad National Urdu University, Hyderabad. She is a known voice on gender justice, and is the founder member of the Muslim Women's Forum.