The Swami With a Mission

A man of peace

Eight one year old Swami Agnivesh is no more. He was struggling to live for two years now, even since he was brutally attacked by a right wing mob in Jharkhand because of which his liver was damaged. Swami who would call if he did not hear from us for a while, or received calls with a warm greeting, admitted in these years for the first time that his condition was not good. The assault had shaken him mentally, and damaged him physically to a point from which he could not recover. And despite his and the doctors best efforts he passed away at the Institute of Liver and Biliary Sciences.

Swami Agnivesh came on to the public scene with his work on rescuing bonded labour. He was amongst the first stories I covered after joining journalism, and was our wont, then were curious and yet sceptical about his claims. He would rescue children working as bonded labour, and always inform the media. He also hit the international spotlights at the same time, getting headlines for his work on bonded labour. We as cynical scribes thought it was all for attention and I remember I followed the vans to see where the rescued children were taken. They were taken away and released in villages or on the borders, closer to their homes. I criticised Swami in one of my first despatches on him, but over time he took note of this, and started marrying the rescue efforts with rehabilitation. The last was absent in his initial efforts.

Swami Agnivesh treated criticism with warmth. And while many of us on the beat spent the next years waiting for him to slip he never really did. He evolved, and started associating himself with causes. He spoke out freely and fairly, and courageously, for democracy and secularism. He was recognised by the tribals as one of their own. He was consistent in his mission to end bonded labour, never faltering. He travelled in crowded trains, for long distances, into India’s heartland to support the poorest of the poor. That is what he was doing when he travelled to Ranchi and another 365 km from there in solidarity with the tribals of Pakur when he was set upon by the mob that beat him mercilessly.

Visibly shaken for days after he kept repeating, “ I am a man of peace, for peace. I just do not know why they attacked me.” The BJP whose Yuva Morcha was credited with the attack at the time, officially condemned it and denied the mob had anything to do with him, but also stated that Swami’s ‘track record’ was such that it was not a surprise! He, of course, was not silenced and made it very clear in subsequent interviews that he was attacked by BJP workers.

This, his aides now say, was the beginning of his end. And his health just could not withstand the impact of the violence. Swami Agnivesh worked on and acquired an image over the years as a champion of secularism and democracy. We shed our scepticism over the years as he evolved into a bold voice for the discriminated and the victimised. He did not allow pressure to work on him, stayed independent, and proved his mettle whether it was in travelling to Kashmir or to the north-east or to the hinterland of the backward northern states. As he would say he did not see religion the people he would travel to stand with in solidarity, just persecution and harassment.

He touched so many lives during these years. He did not care about the rich and the powerful but was accessible to the poorest of the poor. He would pick up his own telephone, or at best be just a minute away for callers on his landline. He would always receive calls, and assure the callers of his support, no matter who they were. Swami Agnivesh publicised his efforts as he believed in the power of communication, but not to collect a darbar around him. Indeed while sitting in his office at Jantar Mantar he would just have his aides around him, never encouraging a darbar while he preached.

And that was one major point -- he never preached. Confident in his faith. Swami Agnivesh embraced all faiths. For instance, he would quietly move away from gluttony journalists digging into Kashmir non vegetarian fare, and sit on a separate table to eat his vegetarian meal devoid of judgement or criticism. Do not mind, he would say, if anyone wondered, I am a vegetarian but will join as soon as I finish. Gruelling schedules did not deter him as he matched younger colleagues step for step, never complained of tiredness, never made any demands on those hosting him, and in all these years have never seen him speak in anger.

A good man, and it is fitting but also sad that he has just been conferred the Hero of Humanity award by the Visioner’s International Network, shortly before his death while he was on a ventilator and perhaps moments before he passed. This award has been given to persons like Florence Nightingale, Nina Meyerhoff and others. The jury recognised his crusade for the bonded and child labourers and stated that the award was also to tell “you how much of an impact you are having and how much your work is appreciated.” And ironically urged him to keep it in his home, as it “is meant to engender a secret smile and encourage you to continue.”

Rest in Peace, Swamiji. We miss you already. 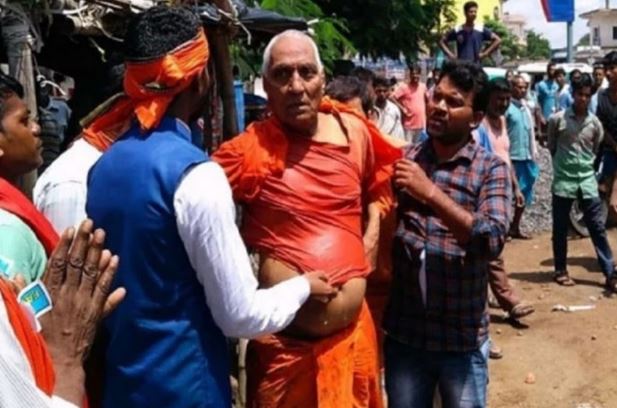