It was nice to receive mails from friends who had assembled at Lucknow boy Nusrat Durrani’s Dumbo apartment under the Brooklyn Bridge on November 3, 2016, election night, armed with champagne bottles to be uncorked as soon as Hillary Clinton pipped the post.

In the event, the champagne bottles stood in one straight line on the dining table like a row of brooding bishops. Trump had shocked all the guests. A submarine sandwich hurled as a missile by a despairing guest knocked the lamp over.

I have repeated the above story because that is what history is supposed to be – a continuous repetition of facts. So indelibly etched on my mind is that party in Brooklyn that every US election will bring alive that episode.

There is another reason for that episode to be so etched on my mind. I did not wish to be the only one out of sync with the general mood that evening, but I was in a minority of one who expected Hillary Clinton to lose. Having arrived in New York a fortnight ago for a discussion in the various campuses of my book, “Being the Other: The Muslim in India”, kept me away from a 24X7 bombardment of punditry on elections.

A cluttering of detail tends to push out of focus the simple, plausible outline conditioning of electoral behaviour. Experience from most electoral theatres had taught me a simple lesson: people were tired of two parties, one indistinguishable from the other.

This was happening at local levels too, even in India. The Aam Aadmi Party’s record 67 out of 70 seats in 2015 was one such wave, smothered by the media which is controlled by the Corporates whose key projects in New Delhi were threatened by the untried party.

It did not have the ideological spine to withstand the assault from the main political parties and the corporate media. Therefore, the bubble burst. AAP is now an ordinary party circling around power.

There are comparisons between Joe Biden scraping through and Hillary Clinton losing in 2016: neither were popular candidates. They were candidates that the Democratic Party “maneuvered” as front runners because on both occasions Bernie Sanders was the most popular candidate, but his democratic socialism was anathema to the establishment.

As soon as it became clear that Sanders was leading the field, the establishment came out, all guns blazing. Thomas Friedman, whom the New York Times values as its star columnist, forgot all decencies of independent journalism and wrote two full columns rooting for former New York Mayor, Michael Bloomberg and a billionaire several times over, as one of the Democratic front runners.

There was no hope in hell that Bloomberg would win (buy) the nomination but, by spending a billion on TV, he would disrupt the game sufficiently for Sanders to advance. “This is a capitalist country” thundered Bloomberg. To protect his credibility, Friedman admitted in his column, that his wife worked for one of Bloomberg’s charities. This is just one of the umpteen tricks employed to obstruct Sanders.

There was a straightforward reason why Clinton was the wrong candidate. The velocity given to globalization after the Soviet collapse gave a fillip to rampaging capitalism. Inequalities broke all barriers. It did not require Thomas Piketty to enlighten as that even in India barely one percent of the rich had cornered 51.53% of the wealth. The picture in the US was worse. Occupy Wall Street became a popular movement. It invited a capitalist riposte – the Tea Party.

People were disgusted with Washington, which symbolized the US establishment. A quest began for an anti establishment candidate. Just one such candidate appeared to be Bernie Sanders. People were looking for social welfare, universal health care, education exactly what the Bloombergs of the US thought would kill the initiative which made America great.

Quite unabashedly, the Democratic Party gave the impression that it was preferable to lose the White House than lose corporate support.

One hoped the shock reversal of 2016 would have taught the Democrats a lesson. Across the Atlantic, Jeremy Corbyn was being likewise thwarted by New Labour. One of their leading lights, Lord Peter Mandelson, had sworn to “undermine” Corbyn.

The other day they suspended him. Corbyn was to Mandelson what Sanders was to Bloomberg. This in June 2017 when the latest opinion polls projected Corbyn as the possible Prime Minister. Another example that the establishment trumps the popular will. Whither democracy, then?

At this very time, another reality was allowed to go unnoticed. A Fox News poll showed that Sanders has a +28 rating above politicians on both sides of the political spectrum. At that time, the Guardian’s Trevor Timm wrote “One would think with numbers like that, Democratic politicians would be falling over themselves to be associated with Sanders, especially considering the Party as a whole is more unpopular than the Republicans and even Donald Trump right now.

Yet instead of embracing his message, the establishment of the party continues to resist him at almost every turn, and they seem insistent they don’t have to change their ways to gain back the support of huge swathes of the country.”

Sanders popularity is now recognized, but after he spelt out the scenario on October 23 in a talk show on how the drama will unfold when votes are counted in these elections, he is well on his way to being prophetic.

“In states like Pennsylvania, Michigan, Wisconsin, and elsewhere, Republicans are likely to go to the polling booths to cast their votes. Democrats, are likely to mail in their votes. When counting begins, the votes counted first will be Republican votes for that reason. So by 10 pm on counting day, Trump will thank his voters and announce victory. But next morning when millions of mails will be counted, the trend will change. That is when Trump will scream murder: I told you they’ll cheat.”

Mayor Rudi Giuliani has already elaborated the case in Philadelphia. 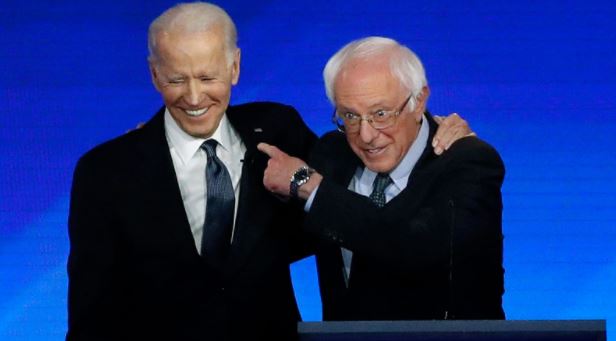