Signals from Owaisi and the Left

The American elections have engendered a flood of memes and witticisms, somewhat breaking the tensions of the wait for their results. One of my home-grown favourites is "Agar Kamala Harris to kaun jeetis ?" ( From my home state of UP naturally). Before this could be answered the US results were declared, and then Kanpur asked: "Kamala Harris bhi aur jeetis bhi ! Yeh kaise?"

The answer to this, of course, lies with Nitish Kumar who embodies harris and jeetis both ! But the really brilliant one was the acronym that connected the American election with our own hustings in Bihar, which was also proceeding apace at the same time. You may remember this one, it goes like this: BI den + HAR ris = BIHAR.

I thought this particular one was very insightful, for the parallels between the two elections- or at least between the two leading personalities involved- are difficult to miss.

Another hilarious but apposite connection between the USA and Bihar was made by a Rashtriya Janata Dal spokesperson on a TV debate the other evening; I am paraphrasing what he said: " There are winds of change blowing from Pennsylvania to Purnia and from Nevada to Nawadah !" Blow they did in the USA, but unfortunately died out somewhere over Hong Kong, long before touching our shores.

The state from where the Mahatma started his non-cooperation movement at Champaran, and which was the birth-place of Jayaprakash Narain's revolt against Indira Gandhi, decided to go belly up this time. It would appear that this is kiss and make-up time for Bihar.

Forgive Prime Minister Narendra Modi for all the sufferings of the lockdown and forced migration, the economic distress, the decimation of the handicraft sector, the highest unemployment rate in India.

Forgive Nitish Kumar for the pandemic failures, the shameless opportunism of joining the BJP two years ago and betraying the anti-BJP mandate he had received in the 2015 elections, the shocking HDI indicators in his state, excise policy which has bankrupted the state but made many more crorepatis out of people of his ilk, the lakhs of poor people in jail because they paid twice the normal price for a tot in the evening, the farmers who are getting half the promised MSP for their produce.

Perhaps it is this large heartedness which makes Bihar one of the most backward states in the country. It may be divine to forgive but it's sheer stupidity to forget the past few years, or to ignore what is happening next door in UP. For all its other blemishes, of one thing at least Bihar could be justly proud: the virus of communalism and religious intolerance has not been allowed to enter the state, either during Lalu's time or Nitish Kumar's fifteen year reign. All that is now about to change.

Mr. Kumar will be nothing more than a puppet on a saffron string henceforth and will be kicked upstairs to Delhi in a year or two, the UP experiment (now that its human trials are over with the brutal suppression of the anti-CAA protests )will be replicated in Bihar, and its voters shall then have something more to forgive come the next elections.

I'm afraid there is no polite way to say this: the Mahagatbandhan lost the elections because of the Congress. With a miserable 19 seats out of 71 its strike rate is not much better than Owaisi's who won 5 out of 20. If the Congress had even retained its previous tally of 27, the NDA would have been shown the door.

But what can one expect when its de-facto President was "resting" in his sister's Mashobra house when the NDA's leaders were in the thick of campaigning for every single vote in the dust and miasma of covid in Bihar? When its most charismatic female star did not even deign it worth her while to go on the campaign trail? When the hubris of past history and the greed of making huge bucks by selling tickets made it bite off much more than it could swallow- the insistence on 71 seats when it should have insisted at most for 40 ?

The Congress should accept that it is no longer a national party- it has only three states on its own. It is a regional party now and should behave like one, shedding its arrogance and pretensions to royalty. It should learn a lesson from the BJP which gives regional players their due where it cannot make it on its own ( even though later it cannibalises them, as the Shiv Sena, TDP and Akali Dal- now known as kali dal in Punjab after its delayed support for the farmers' agitation !- found out ).

Rahul Gandhi and his advisers should learn to play second fiddle in states where their own strings are not tuned properly. For the emerging truth is that, increasingly, not only is the Congress not able to add value to the anti-BJP forces in the states, it is fast becoming a liability for other opposition parties, a dead weight which they will not carry any longer because it is pulling them down. If even 25 of the seats from the Congress quota in Bihar this time had been given to the Left parties we may well have seen a completely different result.

For me there have been two salient developments in the Bihar elections, which can be potential game-changers in the future. The first is the remarkable revival of the communist parties: their 16 seats reassures me that ideologies and principles are not yet extinct in these opportunistic times. The second is the phenomenal performance of Asaduddin Owaisi's AIMIM. The five seats it won in the Seemanchal region may well mark a watershed in the Muslim politics of 180 million people.

For far too long has Owaisi been treated as a pariah by the Right, Left and the Center. The Right considers him anti- national, and the other two think they can best represent the interests of his community without his extreme views and militant idiom. And so the community has historically been persuaded to outsource the protection of its interests to parties like the Congress, the Samajwadi Party, the RJD, the BSP and so on.

Problem is, this hasn't worked. These parties have never had the real interests of the community at heart, have done little for them in substantial terms, used them as pawns in their electoral battles, at times misled them ( the Shah Bano case or the banning of Salman Rushdie's book), even betrayed them ( the opening of the Babri masjid at night and installation of the deity's statue). If at all they have done anything for the Muslims, it has been to support and encourage the most criminal and fundamentalist sections among them , again with a view to elections only. The community has merely been thrown a few crumbs from the high table and asked to trust these parties without any questions.

This out-sourcing has got the community nowhere, as the Sachar Committee report unambiguously establishes. To add to this, the external environment has also changed drastically for them over these last six years: it's almost as if the state has now turned against them. The namby-pamby, now on- now off, anemic protection offered them by the centrist and left parties is no longer seen to be enough.

The Muslim voter has begun to realise that he now needs a party of his own, as muscular ( extreme, if you will), articulate, aggressive and unapologetic as the forces ranged against him. Enter Mr. Owaisi.

It is amusing, and disgusting, to see how the Congress, non-BJP parties and sections of the media have been attacking Owaisi and holding him responsible for the Mahagathbandan's defeat: taking away 5 sure- fire seats and effecting the results in at least 10 more. These parties are simply trying to cover their own thoroughly exposed backsides.

Did they not know that Bihar has at least 39 constituencies where the Muslim population is more than 30% of the electorate? Do only the Congress or RJD have the god- given right to contest from these seats? Why could they not have entered into an alliance with Owaisi ( as he had asked ) and given him some of these seats? Come to think of it , the Mahagathbandhan would have done much better if it had had an alliance with the AIMIM rather than the Congress!

AIMIM and Owaisi have every legal, moral and logical right to contest elections on behalf of their community. The Akali Dal does it for the Sikhs, BSP does it for the SCs/ STs, SP does it for the Yadavs, BJP and Shiv Sena do it for the Hindus, and the Congress does it ( badly ) for everyone else. Why grudge Owaisi his right? For the fact is, he and his party are here to stay and to acquire a pan national profile in the days to come, and it is about time the Opposition sat down with him over some biryani and began to work together.

The onus is now on them, and not Owaisi, to ensure that the Muslim vote is not split. He has already announced his intention to contest in UP in 2022 and in Bengal next year. I hope Mamata Banerjee is paying attention to the Bihar results- with 130 seats out of the total 293 having a Muslim population of 30% or more, she cannot afford not to.

It's an ill wind that blows no good, and maybe the gusts from Pennsylvania may yet reach Purulia, even if they have bypassed Purnea. 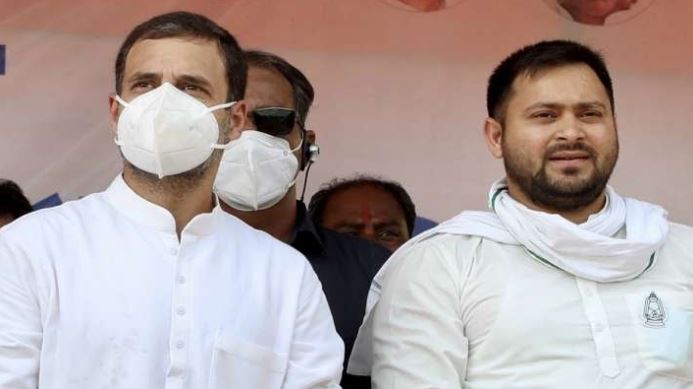